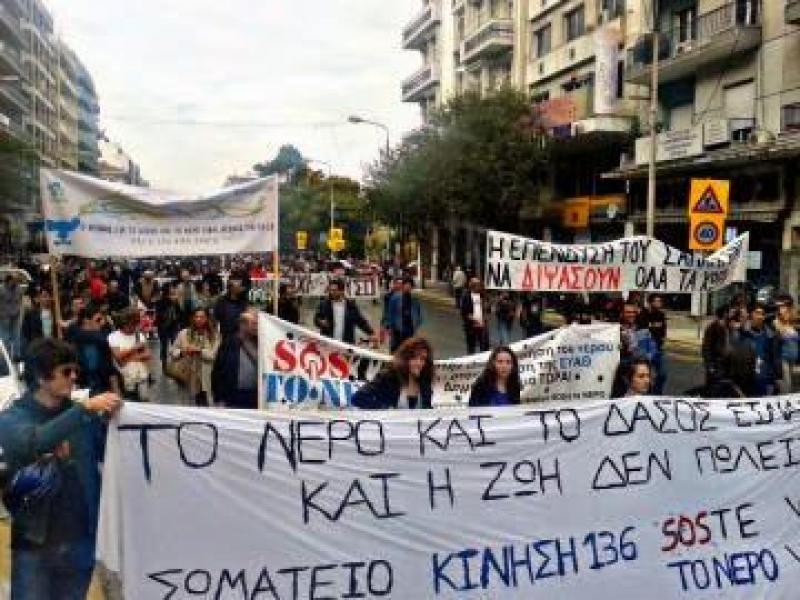 The requirement to sell off €50 billion in public assets is one of the most controversial aspects of the ‘agreement’ that Eurozone countries and the Troika forced on the Greek government during mid-July’s “night of shame”.

Details of exactly what Greece is required to privatise have now emerged with the leaking of the "Memorandum of Understanding for a three-year ESM programme” prepared by the Troika’s International Monetary Fund, European Commission and European Central Bank. [1] The leaked document lists 23 state assets, ranging from airports to service utilities, and presents precise steps and timelines for privatisation.

It comes as a shock that this list includes two large public water companies: Athens Water Supply & Sewerage S.A (EYDAP) and Thessaloniki Water Supply & Sewerage S.A. (EYATH), which provide drinking water for the country's two biggest cities. The Troika had insisted on water privatisation in an earlier memorandum, but strong public opposition had blocked this proposal.

In June 2014 the Council of State, the country's highest administrative court, ruled that transferring a controlling stake in Athens' public water utility EYDAP to private hands was unconstitutional because of the responsibility of the state to protect citizens' fundamental right to health. [2] The new Memorandum foresees the sale of 11% of EYDAP shares, which seems minimal at face value, but given that 38.7% of EYDAP´s shares are already owned by private companies and individuals, it would leave 49.7% of the utility in private hands.

As for Thessaloniki, a non-binding referendum was held in May 2014, resulting in a 98% vote against water privatisation. This citizen-led initiative mobilised 218,002 voters and sent a crystal clear message rejecting the planned sale of 51% of EYATH shares to private investors (French water multinational Suez and Israel’s state-owned Merokot had shown interest). The leaked Memorandum now orders the liquidation of 23% of state-owned shares; knowing that another 26% are already in private hands, this would make the company 49% private.

In both cases, the Troika is demanding a selloff at the maximum level possible without directly conflicting with the court ruling. George Archontopoulos, the president of the Thessaloniki water workers’ union, fears that private investors "will be given management control as a present". Therefore "whether it is 49% or 51%, we oppose further privatization of the company", says Archontopoulos.

Rightly so because there are numerous examples of so-called public-private partnerships in which water multinationals own just under half of the shares but control the utility de facto. An ironic example is that of Germany´s capital Berlin, which sold off 49.9% of its water company (BWB) in 1999. Despite minority ownership, the private companies controlled management and were guaranteed high profits through secret contracts. In 2013, Berlin’s water was taken back in public hands, after almost 15 years of unpopular privatisation. As reported by The Guardian last week, the push by the German government and the EU institutions to privatise Greek water starkly contradicts the trend in the rest of Europe where cities are “remunicipalising” water after failed privatisation experiments. Germany’s water sector is overwhelmingly public-owned and publicly-managed and the German population enjoys high-quality water services provided by these public utilities.

Enough harm has been done already. The public water companies of Athens and Thessaloniki have been on the Athens stock exchange for nearly 15 years. Since then the number of employees in Thessaloniki decreased from 700 to 229. This is a very small number of water workers for a city over one million inhabitants and a 2,330-km piped network. In a comparable city like Amsterdam (1.3 million served population, 2,700 km network), the public water company employs 1,700 staff. Similar cuts have taken place in Athens.

The water utilities of both Athens and Thessaloniki are modern and well-functioning and there is no logical rationale for privatisation. Despite the severe social crisis in Greece, EYDAP and EYATH have been providing high quality, essential services at one of the most affordable tariffs in Europe. The companies are efficient and have healthy finances.

The Troika´s insistence on privatisation is driven by misguided ideology. For one, the sale of the water utilities shares will yield insignificant earnings when considering the big picture.

Worse, handing control over essential services to profit-driven multinationals presents serious risks for the most vulnerable among Greece’s crisis-hit population. The stubborn and aggressive imposition of privatisation goes against the will of Greek citizens and represents a direct attack on democracy. It is scandalous that the European Commission, one of the three institutions forming the Troika, ignores once again its EU treaty obligation to remain neutral when it comes to ownership of water services.[3]

[2] The ruling happened after 27.3 % of the shares were had been transferred to the privatisation fund HRADF in January 2014, to be sold to private investors. The court blocked the planned transfer of another 34.03% to HRADF.