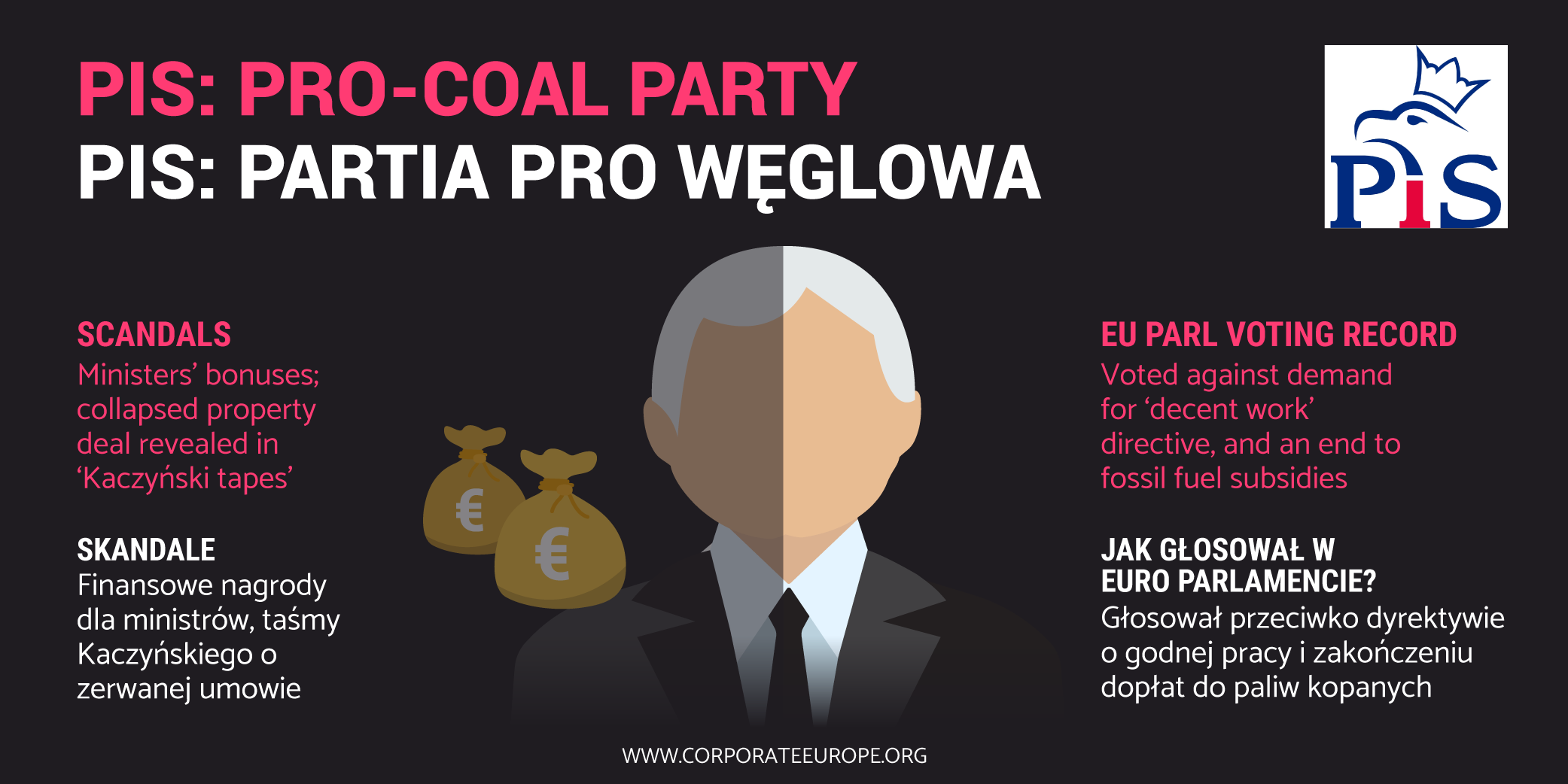 Poland, under the Law and Justice Party (Prawo i Sprawiedliwosc, PiS) has rivalled Hungary in the ‘biggest EU pariah’ stakes. Adopting an authoritarian approach to media freedom, the judiciary, and migration, while waging war on abortion rights and the LGBT+ community, Poland’s PiS has taken the country down the far-right route and its flirtation with Italy’s Matteo Salvini threatens to expand that approach at the European level after the coming elections.

PiS is known as the “pro-coal party” and the promotion of the coal industry by both it and other Polish ruling parties has been documented elsewhere by Corporate Europe Observatory. In line with industry demands, Poland has disrupted efforts by the EU to introduce more ambitious action to tackle climate change, while its hosting of several recent UN-backed climate talks has enabled it to greenwash its record while promoting the coal industry, a remarkable contradiction. Corporate sponsorship of the PiS Government-sponsored 2018 UN climate talks in Katowice included: TAURON (coal, oil and gas); JSW (coal and gas); PGE (coal); PZU (insures fossil fuels); PKO Bank Polski (finances fossil fuels); PGNiG (gas); and LOTOS (oil and gas), all of which are Polish companies. In the light of this, it is not surprising that PiS MEPs have voted against both the phasing out of fossil fuel subsidies and boosting environmental justice, according to our research.

Like many other authoritarian parties studied, it claims to stand up for the interests “of the ordinary man [sic], to the young and the old, and to the needs of hard working people” and PiS aims to deliver a “[rise in] the standards of living of Poles”. Yet our research shows that its MEPs opposed action on the gender pay gap; a proposal for a directive on ‘decent work’; a pan-EU 25 per cent corporate tax rate; the creation of a EU authority to tackle tax evasion; a tax on work by robots to fund worker re-training; and country by country reporting on corporate profits.

Likely PiS voters will have been dismayed by the 2017 bonuses scandal when PiS ministers received large bonuses, worth more than €18,000, and far more than the average annual pay cheque

Likely its voters will also have been dismayed by the 2017 bonuses scandal when PiS ministers, led by the extremist Prime Minister Beata Szydło, were found to have received large bonuses, perhaps as high as 82,000 złoties (worth more than €18,000, and far more than the average annual pay cheque) not long before a government reshuffle. The ministers were eventually forced to divert the money to charity instead, while a fall in poll ratings led PiS to introduce a 20 per cent pay cut for all MPs.

Taking over from Szydło as Prime Minister was Mateusz Morawiecki, the former head of Bank Zachodni WBK, Poland’s third largest, with Spanish mega-bank Santander its biggest stakeholder. Morawiecki soon found himself in political hot water over allegations in Newsweek Polska that he had tried to hide the extent of his property portfolio by passing some deeds over to his wife, a report denounced as “a ruthless political attack on the prime minister's family,” by the Government.

The power behind the prime ministerial throne is PiS’ leader, Jarosław Kaczyński, with no formal role in the government but who is nonetheless a key player in Polish politics. Earlier this year leaked tapes emerged of Kaczyński’s discussions with an Austrian businessman and distant relative. Kaczyński had been discussing a collapsed property deal to build a skyscraper in the middle of Warsaw. Kaczyński is on the board of the political institute which owned the company which in turn owned the land at the heart of the deal. The opposition argued that the tapes showed that Kaczyński had been operating as a “property developer”, and revealed “the ruling party’s true nature as a corrupt and cronyistic grouping prepared to use its power and influence over public institutions to advance partisan interests”. PiS and Kaczyński denied any wrong-doing or illegality, but it seems clear as DeutscheWelle reported that while “Kaczynski once embodied a political leader unconcerned with material wealth, [the] scandal has thoroughly undermined this image”.

Once again, an authoritarian right-wing party’s appeal to ordinary people looks weakened, once set in the context of its record in office and the actions of its elected politicians.