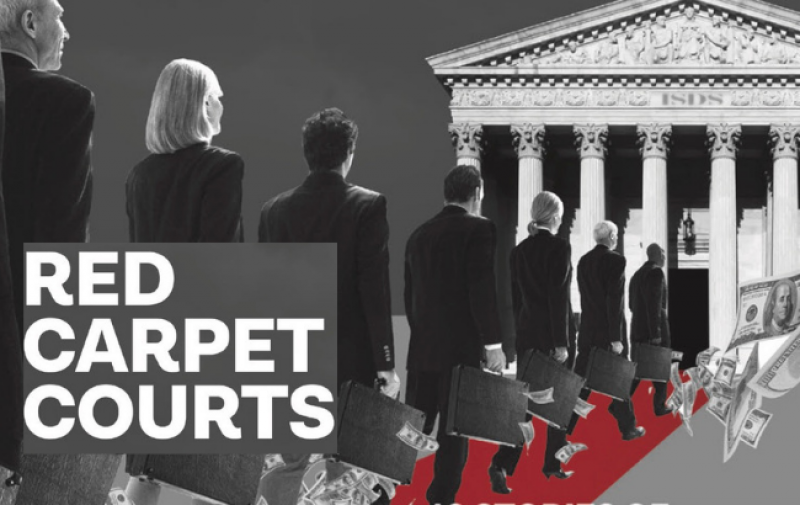 Red carpet courts: 10 stories of how the rich and powerful hijacked justice

Imagine an environmentally or socially destructive corporate project – say, a toxic mine, which could poison your local supply of water, or a luxury real estate project, which would displace hundreds of people in its neighbourhood. You and your community oppose the plans, the courts judge in your favour and the project is stopped. Seems like a community victory right? But then, the company behind the project sues your country for interfering with its profits, demanding millions or even billions in compensation, including for future profits.

Actually, you do not need to imagine all this. It is the reality. Under the ISDS (investor-state dispute settlement) parallel justice system for corporations and the rich, companies can sue countries when they think that government decisions or court rulings – even ones whose explicit aim is to protect people or the environment – affect their profits. These lawsuits bypass domestic courts and take place before an international tribunal of arbitrators: essentially three investment lawyers who decide whether private profits or public interests are more important.

For example, after Colombia’s Constitutional Court banned mining activities in a sensitive ecosystem which provides drinking water for millions of Colombians, Canadian mining company Eco Oro sued the country for US$764 million in damages. When Croatian courts cancelled illegal permits issued for a luxury golf resort in the city of Dubrovnik, Croatia was hit with a US$500 million compensation claim. Romania is defending itself from a shocking US$5.7 billion claim by Canadian mining company Gabriel Resources, after the country’s courts declared the company’s proposed toxic Roşia Montană gold mine illegal.

These are just three out of ten noteworthy but also representative ISDS lawsuits described in more detail in this report, which have been filed, threatened or decided since 2015. Globally, almost 1,000 ISDS cases are known of to date, in which governments have been sued for more than US$623 billion in total. This figure is equivalent to 90 per cent of all Foreign Direct Investment flows to all developing countries in 2018. The total amount of money which states have thus far been ordered or agreed to pay in disclosed ISDS rulings and settlements is US$88 billion.

These lawsuits are happening at a critical moment for the ISDS regime. On the one hand, strong public controversy about the ‘corporate courts’ has kept citizens, politicians and the media engaged, interested and critical on the issue. Also, a number of countries have started to pull out of the regime by terminating ISDS deals. On the other hand, new trade and investment agreements which include ISDS provisions are under negotiation in many parts of the world, and the European Union (EU) is actually planning to scale-up ISDS through a World Court for Corporations (formally known as Multilateral Investment Court). These developments risk further expanding, locking-in and re-legitimising a much-criticised system that has proven extremely dangerous for taxpayers, democracy, social and environmental protection, economic development and climate justice.

ISDS has morphed from a rarely used last resort... into a powerful tool that corporations brandish ever more frequently, often against broad public policies that they claim crimp profits.

Against this background, this report shows that ISDS is again and again used as a corporate weapon against the public interest, and in spite of the ongoing controversy about it, these red carpet courts for corporations continue to thrive and reinforce injustice across the world. This parallel legal system continues to deliver hundreds of millions or even billions of dollars of taxpayers’ money to companies and rich individuals. ISDS cases, or just a risk thereof, regularly succeed in intimidating nations into gutting their own laws, thus deeply undermining democracy and citizen engagement around the world. Many cases also show how ISDS directly contradicts and obstructs other legal fields, most notably human rights and environmental law.

The latest EU approach to corporate rights does not do anything to put an end to this or address the many concerns and critiques of the system of EU citizens. In fact, alarmingly, its impact is quite the opposite: under the EU’s reformed ISDS (renamed Investment Court System or ICS) and the proposed Multilateral Investment Court, thousands of companies could continue to circumvent domestic courts and sue governments in an exclusive justice system if any national laws or regulations interfere with their ability to make huge profits. The EU’s ISDS policy would still pave the way for billions of taxpayers’ money being paid to big business and the rich. It could still curtail and undermine policymaking in the public interest, to protect people and the planet. And it could still lead to rulings that directly contradict human rights and environmental law.

As the EU embarks on a crusade to globalise its ISDS approach, this should not just alarm Europeans. From Mexico to Vietnam, from North America to the African, Caribbean and Pacific group of states, citizens and policymakers across the world should realise that the EU has not resolved the deep-seated problems with ISDS, which came under such serious critique in recent years. Instead, the latest investment protection proposals are just as dangerous for taxpayers, policies in the public interest, and democracy as the ‘old’ ISDS system – and as much a one-way system with only rights and lucrative possibilities, but no obligations for investors. These red carpet courts for corporations should have no space in any international agreement.

10 case studies of how the rich and powerful hijacked justice: