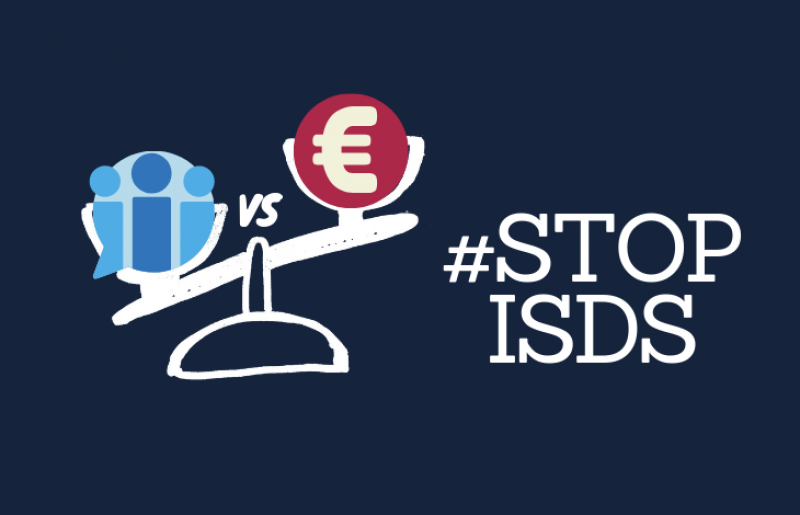 TAKE ACTION: Strike a blow against corporate power in 2019

"Wait a minute. I don’t really get what ISDS is. ...." Here is our straightforward "What is What" on Investor-State Dispute Settlement - and why it's so dangerous.

Under ISDS corporations and the rich have sued governments for billions of euros – for anything from introducing health warnings on cigarettes to banning dirty oil drilling. Citizens, campaigners and social movements are uniting in 2019 to put an end to this parallel justice system for big business.

Wait a minute. I don’t really get what ISDS is.

Let me explain. ISDS – short for ‘investor-state dispute settlement’ – gives transnational corporations enormous power. It’s a system that allows them to sue countries where they hold investments – a factory, an oil field, or even just a share in a company, say – for unlimited sums of money. ISDS allows a corporation to sue a country if it makes new laws, court rulings, or other decisions that limit (even potentially) the corporation’s profits. To take one example, Swedish energy giant Vattenfall is suing Germany for €4.3 billion plus interest, because the country’s decision to end the use of nuclear power in the wake of the Fukushima disaster means shutting the corporation’s old nuclear plants; Canadian mining company Gabriel Resources is suing Romania for US$4 billion after Romanian courts found that the firm’s proposed toxic gold mine was illegal; and UK-based oil company Rockhopper is suing Italy for up to US$350 million in damages after the Italian Parliament banned new oil and gas operations near the Italian coast.

That's outrageous! A parliament should be able to take such decisions without being sued.

Exactly. And corporations do not even have to win a case to get their way. Sometimes an expensive lawsuit – or even just the threat of one – can be enough to scare policy-makers and delay, weaken, or kill the regulations they were working on. This happened when tobacco giant Philip Morris sued Australia over a health law that required less attractive packaging of cigarettes. Just by launching the case, Phillip Morris created a chilling effect on other nations who might otherwise have enacted similar legislation – for example in New Zealand, where plain packaging plans were deferred for over four years until the case was over. Just recently, Friends of the Earth France revealed how a Canadian oil company used the threat of an investor-state lawsuit to weaken a French law which was supposed to end climate-wrecking fossil fuel projects.

But don’t we have to keep dirty fuels in the ground if we want to stop global warming?

You’re right. But ISDS gives big business enormous power to stop policy-makers from doing the right thing – on all sorts of rules, whether it’s ending oil exploration, banning plastic bags, or reversing a failed privatisation.... That’s why we have to get rid of ISDS.

First, countries need to get out of existing ISDS deals. Globally more than 2,600 are in force, most of which are bilateral agreements negotiated in the 1990s. At that time countries signed hoping that these treaties would bring investment, whilst remaining largely unaware of the risks. Since 2000, however, investor challenges against legitimate public interest decisions have increased at a rapid rate. Fearing they could be stuck with vast bills at the taxpayers’ expense, South Africa, Indonesia, India and many others have terminated some of their bilateral investment treaties. Just recently, EU member states announced that they would terminate all their roughly 200 bilateral treaties with other EU countries. Under the former centre-left government, Italy also departed from the Energy Charter Treaty which is basically a large ISDS deal for the energy sector (more info here, p30). There are also proposals for how ISDS could be ended globally, in a less piecemeal approach.

So it’s easy to get out of these agreements?

Yes and no. ISDS treaties can be terminated by mutual consent at any time. But legally, most have to be in force for several years before they can be abolished by just one side. And when a country announces plans to cancel, they can receive significant pressure to keep their ISDS deals. When South Africa announced the end of some treaties with EU member states, for example, the European Commission and corporate lobbyists threatened to cut investments.

Indeed. But the scare tactics seem to be worse than the reality. In practice, quitting ISDS has not decreased countries’ investment inflows. It is also becoming more common. According to UN data, at least 100 investment deals have been ended since 2012. Over 1,000 have reached a stage where they can now be quit one-sidedly. So policy-makers now face a historic window of opportunity. We have come to a turning point where more ISDS treaties are terminated than newly concluded.

Hold on. There are governments still signing up to new ISDS deals?

Unfortunately, yes. The EU has just concluded ISDS deals with Singapore and Vietnam (though under a different name, the ICS or Investment Court System, in an attempt to avoid controversy). The Singapore deal will be voted in the European Parliament in February 2019. Another deal, the EU-Canada CETA (Comprehensive Economic and Trade Agreement) has already passed the European Parliament, but still needs to be ratified by parliaments in more than a dozen EU member states before its ISDS investor privileges can enter into force. More investment deals are in the making with Japan, Mexico, China, and many more countries.

I know. And that’s not even the last of it. The EU is also pushing for a world court for corporations, a kind of ISDS for the entire globe!

Now I don’t know if I’m just tired, or getting depressed...

I understand, but look. The more the public learns about ISDS the more the opposition grows. This plan for a global corporate court is in its early stages, and can still be derailed. As can any new agreement that includes the extreme corporate privileges of ISDS.

With people power. We need to put massive public pressure on governments and parliaments. We’ve actually done it before, and it’s worked. In the 1990s public opposition brought down the Multilateral Agreement on Investment, a proposed global ISDS deal. More recently, the TTIP trade deal, which would have handed unprecedented powers to corporations, was also defeated. We can do it again.

A broad alliance of over 150 civil society groups, trade unions, social movements, and individuals from across Europe and the world. And hopefully, you. We are working together to stop our governments from signing on to new ISDS deals, to get out of existing agreements, and to introduce new rules to hold corporations accountable – for example, by supporting a UN Binding Treaty to address corporate human rights abuses.

And can this work?

The signs are that it could. Opposition to ISDS comes from many different corners of society. In Europe, a record 3.5 million people signed a petition against the investor privileges in CETA and TTIP. More than 2,100 local and regional governments sounded alarm bells. Trade unions, consumer, environmental, and public health groups reject ISDS as do many legal scholars, prominent economists and UN experts. In countries like Germany, France (here and here), and the Netherlands, media investigations have revealed the corporate power grab to a large number of people. The European Court of Justice has even found ISDS incompatible with EU law.

You can sign our petition. It demands that the EU and its member states withdraw from existing ISDS deals and do not conclude any new ones. It also calls on them to introduce new rules to hold corporations accountable. If this happens in the EU, it could give a knock-out blow to ISDS around the world – and be a major boost towards creating a tough global system that can punish multinationals for their crimes.

You can also get in touch with local campaigners and your elected representatives to alert them to this issue. There will be street protests and actions. And many moments to build pressure. Check the campaign website, Facebook and Twitter for contacts and updates.

We have a whole year to shift the balance of power to people and the planet. It would be wonderful to have you on board.