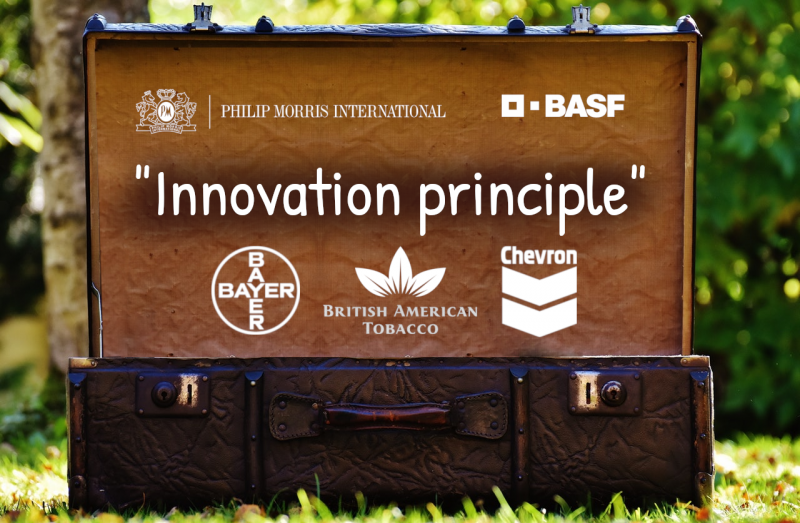 The upcoming Finnish Presidency High-Level Conference on 3 December 2019 in Helsinki puts the spotlight on the so-called “innovation principle”. The innovation principle was invented and pushed by the chemical, tobacco, and fossil fuel industry lobby groups. It is essentially a tool for undermining the EU’s environmental and public health protections and the precautionary principle, and for securing EU funding for industry’s Research & Development needs.

The innovation principle became highly controversial last year when it was incorporated into the EU’s research funding package HorizonEurope. A report by Corporate Europe Observatory, based on numerous internal correspondence between the European Commission and industry lobby groups, tells the story of how the innovation principle was pushed into EU decision making by big business.

Last week, the European Commission published an interim evaluation of the innovation principle, for which it hired a corporate-sponsored think tank, CEPS. CEPS is backed by the companies such as British American Tobacco and Bayer, that pushed the principle in the first place.

The choice by the Finnish Presidency to dedicate a High-Level Conference to this concept once more demonstrates the level of corporate capture of EU Presidencies. In the context of its EU Presidency in 2016, the Dutch government actively cooperated with corporate lobby groups to get the innovation principle incorporated into conclusions by the Council.

What is the innovation principle?

The innovation principle presents a new form of impact assessment to ensure that “whenever policy or regulatory decisions are under consideration the impact on innovation should be assessed and addressed”. It is not a principle of law, like the precautionary principle, but a tool designed to create more leverage for business interests in the early phase of decision making.

Who is behind it?

The innovation principle was launched by industry lobby group The European Risk Forum (ERF), with support from BusinessEurope and the European Roundtable of Industrialists (ERT). ERF members mainly come from the chemical, fossil fuel and tobacco sectors. However, when the controversy around this topic started, the ERF removed the tobacco companies British American Tobacco and Philip Morris from its membership list. (See below for further information on the ERF).

All of these industry lobby groups have been promoting this new invention through a high-pressure lobby campaign that included an avalanch of meetings as well as email correspondence with Commission officials in numerous DGs. The ERF also organised events and had high-level access to at least three previous EU Presidencies (Malta, The Netherlands and Bulgaria), despite its representation of the tobacco industry.

What is at stake? EU environmental and public health safeguards

In contrast to its stated goal, the documents released to Corporate Europe Observatory by the EU Commission show that the industry architects of the innovation principle actually aim to weaken EU chemicals regulation (REACH) as well as EU rules for novel foods, pesticides, nano materials, pharmaceuticals, medical devices and biotechnologies.

At one high-level lobby meeting where a large number of chemical, pesticide and plastics lobbyists were present, as well as British American Tobacco (BAT), the pesticides industry praised the innovation principle but complained about the EU “black-listing substances considered innovative (as per the numberof existing patents) or indispensable/useful”. This suggests that the innovation principle will also be used by industry to support non-innovative and controversial products.

The innovation principle means another boost of industry’s influence over key EU environment and public health safeguards which poses a grave risk to the public interest. For this reason, the federation of consumer unions BEUC and trade unions opposed it.

Need for an “innovation principle”?

There is no need for an innovation principle. Innovation happens all the time, and the right kind of innovation -in the public interest; in line with policy coherence such as the UN Sustainable Development Goals- can and should be promoted through specific policies and funding. With no qualifier provided for “innovation”, anything goes, as researchers at the Catholic University of Louvain la Neuve have pointed out, criticising the open-ended way in which the innovation principle has been defined.

Rather than fostering innovation, the innovation principle could even hinder innovation by keeping old (and possibly harmful) products on the market as a result of having weakened existing legislation under revision.

The innovation principle is a covert attempt at counteracting EU social and environmental safeguards as well as the precautionary principle. It was invented and pushed by the European Risk Forum, a lobby group combining the efforts of the tobacco, chemical and fossil fuel industries.

Innovation is very much needed to deal with the societal and environmental challenges ahead, but an industry-invented and driven lobbying tool that jeopardises the EU’s social and environmental safety standards is certainly not the way to foster this innovation.

The ERF was initially a working group of the European Policy Centre with strong involvement of British American Tobacco.According to this paper by Katherine Smith et al. it fought against smoking bans. The ERF is also known to have funded travel costs of a small group of scientists who have consistently tried to undermine DG Environment’s work on the scientific identification of hormone-disrupting chemicals (endocrine disruptors).

Lobby consultancy FIPRA, whose International Chairman Robert Madelin previously worked as special adviser to Commission President Juncker and in this role strongly supported the introduction of the innovation principle, hosts the ERF in its offices.

ERF has counted British American Tobacco (BAT), Philip Morris, Dow, BASF, Bayer/Monsanto, and Chevron among its members, and the tobacco companies were among the ERF’s founding members and enjoyed uninterrupted membership during the last 13 years.

After CEO submitted Freedom of Information requests to the European Commission, the tobacco companies were removed from the ERF membership list, and others were added.

It is important to note that the tobacco industry keeps getting high-level access to EU decision makers through fora like the European Risk Forum, although it is effectively hindered from lobbying (UN Tobacco Framework Convention, Art. 5.3) and is not supposed to have privileged access to policy-makers.

December 2015. The innovation principle first made its appearance in a staff working document of DG Research. The one single source of the term and concept at the time was a position paper by industry lobby groups BusinessEurope, ERT and ERF, which leaves little doubt that the Commission took it straight from there.

January – June 2016. The Dutch Presidency pushed hard for the innovation principle to be included in the Competitiveness Council conclusions in May 2016. In January 2016, it was the central topic of a high-level conference organised by the European Risk Forum and BusinessEurope “in cooperation with the Dutch Presidency”.

A reference to the industry-invented ‘principle’ was repeated in Council conclusions under the next EU presidencies: Malta in 2017 and Austria in 2018. The Malta and Bulgaria Presidencies which followed the Dutch one, co-organised events with the European Risk Forum - another demonstration of continued privileged access.

June 2016. The Commission’s in-house think tank EPSC published a Strategic Note in June 2016 constructing a legal basis for the innovation principle. This Note uses word for word the same definition as the 2015 position paper by industry,“.. ensuring that whenever policy is developed, the impact on innovation is fully assessed”, while failing to make any reference to the industry origin of this principle.

What is more, the EPSC told CEO that zero documents exist around its Strategic Note or the innovation principle. This immaculate conception appears very odd, since any EPSC Strategic Notes require a mandate from President Juncker, needing at least some internal communication.

July 2017. DG Research took the May 2016 Competitiveness Council conclusions as a mandate to implement the innovation principle. They did this by setting up an Innovation Principle Taskforce that developed a so-called “Research & Innovation Tool” (published July 2017), which contains many elements from the industry position paper including the need for flexibility, cost of compliance andalternatives – effectively the impact assessment tool which industry had been asking for. The DG Research Innovation Principle will screen “future initiatives to identify those where the innovation principle could be implemented.”

2018. The innovation principle was mentioned in a recital of HorizonEurope, that went to vote in the European Parliament in December 2018. Despite the controversy, amendments to take it out did not succeed.