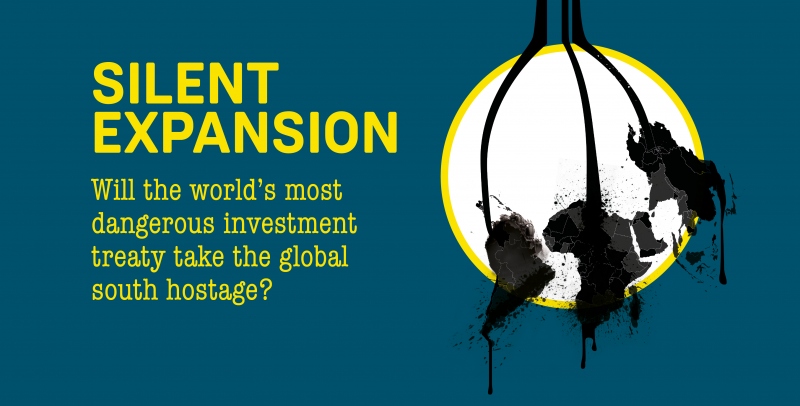 The Energy Charter Treaty (ECT) gives foreign investors sweeping powers to sue states over government actions that have supposedly ‘damaged’ their investments. Investors use a parallel court system to sue, and the compensation for a win can be in the billions. In recent years, the ECT has become increasingly controversial – not least because of its potential to obstruct the transition from climate-wrecking fossil fuels towards renewable energy. But despite the growing controversy many countries, particularly in the global south, are in the process of joining the ECT.

Read the briefing in English, French and Spanish.

Lured by the false promise that it will help attract investors and solve energy poverty, there is often little consideration by these governments of the ECT’s severe political, legal, and financial risks to new signatory states. This is despite the fact that, if a country accedes to the ECT, it is locked into it for 26 years – even if subsequent governments want to leave.

Since 2012 the ECT’s Secretariat – which is not just an administrative body, but the driving force behind drumming up support and new signatories for the treaty – has been putting great effort into expanding the geographical reach of the agreement to countries in Africa and the Middle East, Asia, and Latin America. The Secretariat has downplayed the risks of the ECT and exaggerated its benefits. As a result, many countries are in line to sign the agreement, with its extreme investor privileges. In signing up, they risk shrinking their ability to decide their own energy policy, as well as opening themselves up to the potential for costly lawsuits by investors.

The Energy Charter Secretariat is in expansion mode, wanting to gain access to energy resources in Africa and Asia for its current – mostly developed – country members.

The ECT Secretariat seems to target primarily the energy ministries of its potential new member states. On the other hand, officials with experience in negotiating investment treaties and defending investor-state arbitrations (ie those with long experience of the risks these kinds of treaties present), appear largely absent from the accession process.

This might explain the alarming lack of awareness about the ECT’s political and financial risks in some accession countries. While many have had disastrous experiences with corporate lawsuits under other investment agreements and contracts, reports written by national experts who have temporarily been seconded to the Brussels-based ECT Secretariat, for example, are full of unproven claims about how the ECT “can positively impact” a country or region “with regard to attracting the needed energy investments” – but say nothing of the risks of the ECT’s vast investor privileges.

And yet, the risks of joining the ECT are substantial.

Read the briefing in English, French and Spanish.

And check out the infographics higlighting why the ECT is dangerous and which countries are in the process of joining. 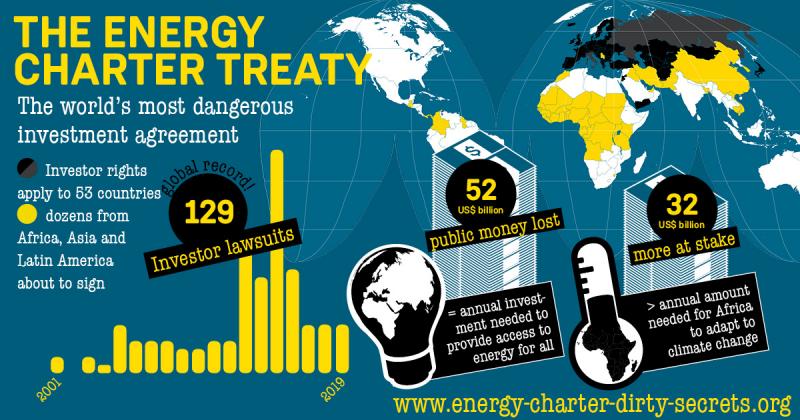 Check out this podcast episode, co-produced by CEO, SEATINI and TNI, on the briefing.

You can find out more about the Energy Charter Treaty on www.energy-charter-dirty-secrets.org/ 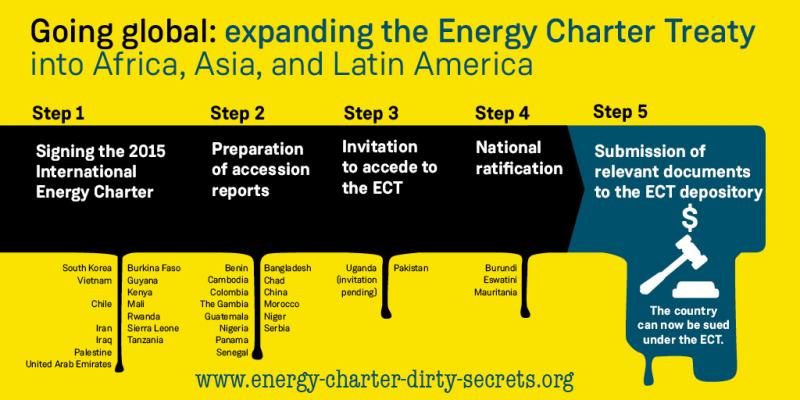