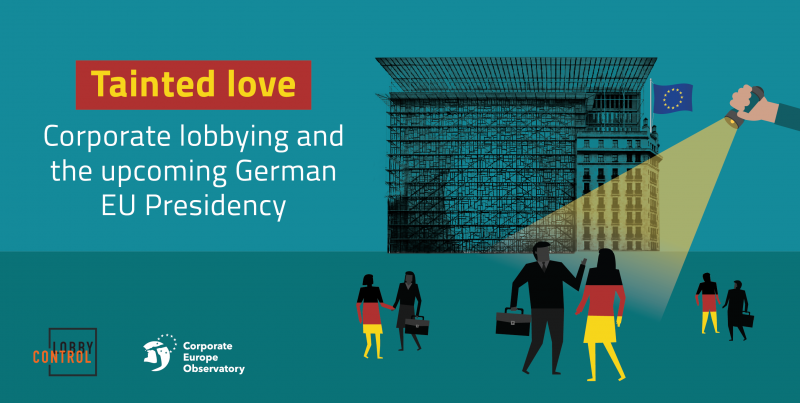 The German Government’s ‘love affair’ with gas and the unconditional support for its automobile sector are two clear cut examples of how its upcoming EU Presidency risks preventing effective climate action by the EU. The German so-called ‘Energiewende’ (energy system transformation) is in a serious crisis (1) and is currently being hijacked by the powerful gas industry lobby. This is evident from a new report “Tainted love: corporate lobbying and the upcoming German EU Presidency” published today by two NGOs Corporate Europe Observatory and LobbyControl.

Expectations in the ‘Brussels bubble’ for the German EU Presidency starting 1 July may be high. But the reality of German Government positioning on many policy areas in the EU Council, gives great cause for concern for the chances of both a sustainable post-pandemic recovery and the Green Deal of the European Commission President Ursula von der Leyen.

Via various detailed case studies the new report shows that on many EU issues – vehicle emission limits, new gas support and infrastructure, sustainable finance, tax policy, ePrivacy, chemicals regulation, fishing quotas - the German Government is too close to its domestic industry interests. This leads to delays, loopholes, or even the blocking of new EU rules, and seriously undermines the public interest. The case studies have been written by a range of NGOs: Bund für Umwelt und Naturschutz Deutschland e.V, Deutsche Umwelthilfe, Finanzwende, Netzwerk Steuergerechtigkeit, Coordination gegen BAYER-Gefahren, and Our Fish.

The “Tainted love” report is published on the day of the EU Environment Council, when the German Presidency will present its climate and environmental policy goals. Caution is needed because while the German Government often prides itself on its record in introducing progressive environmental policies, the reality exposed in these studies shows that the Ministry for Economic Affairs and Energy (BMWi) under Minister Peter Altmaier has a decisive, and not so climate-friendly say, while the Ministry for Environment is in a much weaker position.

"These times are simply too critical for a business-as-usual approach; it’s vital that the German Government ensures its EU Presidency focusses on the public interest rather than its national industrial interests. The Government must put the brakes on the privileged access and policy favours for the car, gas, and other industries whose interests run counter to tough action on climate change, a robust European Green Deal, and a corona recovery package based on social and environmental justice."

One case study shows that the German Government has been watering-down EU carbon dioxide vehicle emission targets ever since they were introduced, despite the ‘Dieselgate’ scandal. The Government’s record in the EU Council has enabled the German car industry to maintain its model of ever bigger luxury cars with combustion, notably to boost Germany’s export balance. Exemplifying the point, in January this year Altmaier wrote to Von der Leyen to argue against more pollution limits for the car industry before 2030, which would be necessary to fulfil the new European climate target of being CO2 neutral by 2050.

Via its ‘Gas 2030’ national strategy, the German Government is prioritising securing energy supplies, including from fossil fuel sources, including gas, which will also involve new infrastructure such as Nord Stream. A few months ago Minister Altmaier summed up his administration’s view on gas as: “Gas is not only important, it is sexy.” This is especially worrying as the German Council Presidency will see numerous gas-related and energy files on the EU agenda. (2)

Earlier this month, the German Government produced its national hydrogen strategy. There is now a serious risk that the German Presidency will undermine action on climate change by misleadingly promoting hydrogen as a clean and carbon neutral fuel at the EU level.

The Government also fought to ensure that gas was included in the EU’s so-called sustainable taxonomy, which will determine which investments are to be classified as green and compatible with UN climate agreements.

Meanwhile, just when public budgets come under huge pandemic-induced pressure, “Tainted love” shows how the German Government has so far refused to support EU proposals to introduce greater corporate tax transparency. Additionally, Finance Minister Olaf Scholz, alongside a handful of other Finance Ministers, has actively blocked an EU proposal for a Digital Services Tax (DST) on tech giants. The consequences of this latter approach was exposed last week when the US pulled out of OECD talks to discuss a global digital tax. It is now imperative that the German Government reverses position and gets behind both a robust EU DST, which is an important part of the funding for the EU’s corona recovery plan, and corporate tax transparency.

According to Corporate Europe Observatory and LobbyControl, the lack of appetite for introducing more transparency and accountability in Council policy-making, and the German Government’s consistent and ongoing support for some of its most powerful industries, threatens to undermine public interest decision-making during the upcoming Presidency.

The German Presidency will kick off in the midst of a domestic scandal involving rising CDU- politician Philipp Amthor, who arranged lobbymeetings for the US company ‘Augustus Intelligence’ with the Federal Ministry for Economy and Energy. A short time later, he held a directorship in the company, received stock options and took part in expensive trips. This scandal exposes the absence of any real lobby transparency at the federal level.

Next week, the German EU Presidency takes the lead at the Council of the EU, which is often referred to as a ‘black box’.(3) The lack of legislative transparency in the Council advantages corporate lobby groups who have the resources and networks to be able to gather the information themselves and influence the policy-making process.

“The German Presidency should urgently introduce legislative and lobby transparency at the Council. Now more than ever, the transparency of decision-making at the EU level is crucial as difficult decisions are made about the winners and losers of post-coronavirus recovery programmes. For Germany, we demand a mandatory lobby register for the Bundestag and the Federal Government, the publication of lobby meetings of ministers and senior officials. Moreover, the German Government must put an end to business-only consultations.”

Please find the English versions of the report, summary, and civil society statement here or at these links:

1. Germany’s sustainable energy transition is in crisis. While the phase-out of nuclear power is proceeding as planned, the coal phase-out has been decided only in principle, and with an unclear end date. At the same time the installation of renewable power has slowed down significantly and the necessary grid modernisation and extension is implemented slowly. Political will to address these shortcomings is lacking, creating uncertainty for investors, energy market actors, and citizens. The gas industry has capitalised on this uncertainty by promoting gas as the secure, clean replacement for coal and nuclear energy.

2. During the German Council Presidency, numerous gas-related and energy files will be on the EU agenda. These include the EU’s gas policy package, gas decarbonisation strategy, gas market reform, a methane strategy, and a review of the ongoing Trans-European Networks for Energy (TEN-E) process. These policies will shape future EU gas policy and the German Government will be able to exert considerable influence on prospective EU energy policy.

3. European Ombudsman. Summary of the decision in strategic inquiry on the transparency of the Council legislative process. May 2018: https://www.ombudsman.europa.eu/en/summary/en/9490