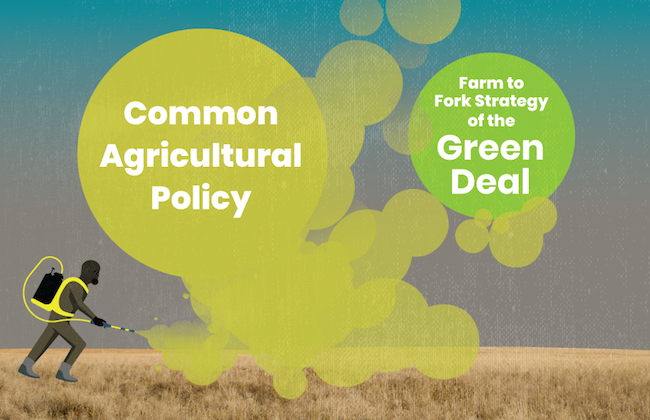 Corporate Europe Observatory today reveals how an ‘unholy alliance’ of big farm and agribusiness lobby group Copa-Cogeca, together with pesticides and food industry giants, is waging a full-blown lobby battle against the EU's Farm to Fork Strategy and Biodiversity Strategy. These new strategies towards a more sustainable agriculture were announced in spring as cornerstones of Commission-President Von der Leyen’s Green Deal. This lobby-alliance is pushing national governments and members of the European Parliament hard to stop the ongoing Common Agriculture Policy (CAP) reform from being aligned with the EU’s Green Deal.

The reform of the CAP approaches a key vote in the European Parliament on 20 October. Internal documents show that the agribusiness lobby aims to rush through the current CAP reform, while trying to delay the Farm to Fork Strategy. Their plan is to keep the CAP as it is, which will strongly undermine the Farm to Fork and Biodiversity objectives. This is all with the support of the German EU Presidency, which is pushing for a quick CAP deal in the Council this autumn.
Aligning the CAP with the Green Deal will reduce the amount of public subsidies going to a destructive model of agriculture. For example Farm to Fork would require over 10 years a 50 per cent pesticide use/risk reduction (1), a 50 per cent reduction in antibiotic use, and a 20 per cent reduction in fertilizer use. All these will be undermined if the lobby alliance is successful.
Tactics used by the lobby alliance include calls for delay and impact assessments, sponsored lobby events, national lobbies contacting EU officials or Commissioners of the same nationality, making claims that the proposed targets would not be realistic nor effective, and that they would put farmers out of business.
The report also shows the way in which Copa-Cogeca and wider agribusiness enjoy privileged access to decision-makers in the EC and in the European Parliament, notably via so-called ‘civil dialogue groups’. These are expert groups advising the Commission on agriculture matters, and are heavily dominated by Copa-Cogeca, allied organizations, and industry.
Copa-Cogeca’s positions largely defend the existing CAP, including the unequal distribution of subsidies which unfairly benefit large landowners (20 per cent of beneficiaries receive 80 per cent of all CAP subsidies). Internal documents show how both Copa-Cogeca and the majority of member states oppose a mandatory limit on the amount of CAP subsidies one farmer can receive. They want a voluntary limit which would allow governments to continue to hand out most public subsidies to big land owners and oligarchs.

Nina Holland, researcher at CEO said:
“Over the years, the CAP has become one of the most blatantly misleading European policy areas: it pretends to support farmers and to make agriculture more sustainable, but it does neither. EU decision makers must resist the lobby pressure by pesticide companies and Copa-Cogeca, or the Farm to Fork ambitions will be seriously undermined by the CAP. Farmers must be supported to make the transition to a farming model that supports biodiversity and does not ruin the climate. Public support for EU farm subsidies will dwindle further if the CAP is not made more fair and more green.”

Martin Pigeon researcher at CEO said:
“An important finding of the research is that while it pretends to speak on behalf of all farmers, Copa-Cogeca’s positions are very much influenced by those of the agribusiness industry. One major reason is that farmers’ cooperatives, who are part of Copa-Cogeca, have morphed over time into multi-billion-euro agribusinesses themselves, making fortunes selling fertilizers and pesticides to farmers. A case study on Copa-Cogeca’s French member FNSEA shows how it has very strong control over farmers’ representation in the country and is dominated internally by both large crop growers, cooperatives, and agribusinesses, while using farmers’ despair and anger for political leverage.”

The report ‘CAP vs Farm to Fork: Will we pay billions to destroy, or to support biodiversity, climate, and farmers?’ (with a link to all the documents) can be downloaded here.

* Unearthed today also reveals on the basis of internal document show ‘Agriculture and chemical giants lobby to weaken European Green Deal’
* The EU spends 34.5 per cent of its total budget for 2020 (€58 billion euro) on the Common Agricultural Policy (CAP).
* The farming/CAP budget for 2021-2027 will amount to €344 billion or 32 per cent of the total MFF.
* Despite all those billions of CAP money, in one decade (2003-2013) no less than 25 per cent of all EU-farmers went bankrupt because they did not earn enough.
* At the same time 80 per cent of CAP funding went to the 20 per cent of the largest land owners.
* The Commission’s 2018 CAP post-2020 reform proposal has been strongly criticized, for instance in the 2020 report by the European Court of Auditors which concluded that it would not be effective in halting the decline of biodiversity on farmland.
* European intensive livestock farming – heavily subsidized via the CAP – is responsible for at least 10 per cent of total EU Greenhouse gas emissions.