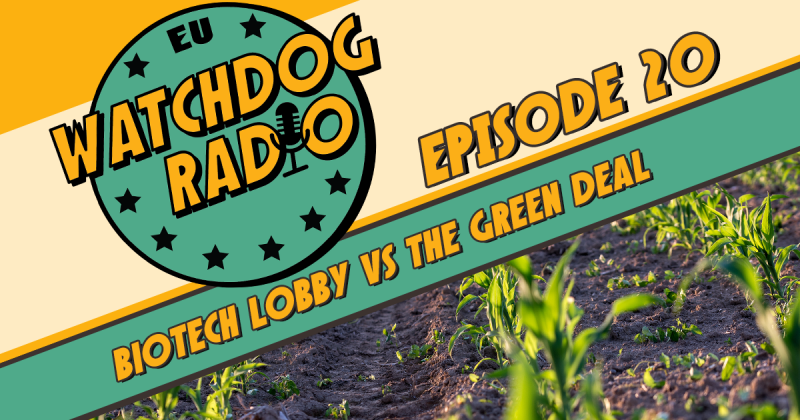 In this new episode of EU Watchdog Radio we dive into the covert lobby tactics used by the biotechnology industry to get a new generation of GMO’s to be used in agriculture, deregulated in the EU. Why are agrochemical companies like Bayer and Corteva to against having European safety rules?  And why is the Bill and Melinda Gates Foundation financing this lobby-campaign?

A few decades ago some agrochemical companies started selling patented seeds created with genetic modification, for growing plants called GMO’s. They are now trying to promote a next generation of GMO’s using new genetic editing techniques like Crispr/Cas. But the companies do not want these to be called new GMO’s because in Europe those have a bad reputation and track record. The first generation GMOs did not live up to the expectations that were created back then.

CEO-researcher Nina Holland explains how she uncovered a number of dubious lobby tactics employed by the biotech industry to convince EU policymakers. The aim of this lobby campaign is a complete deregulation of new GMOs in Europe.  So basically they are trying hard to persuade European politicians to allow the commercialization of genome edited plants and animals without any safety checks, monitoring or labeling. In the same week IFOAM Organics Europe has sent an open letter on behalf of 162 organisations from all European countries to the European Commission to warn against this deregulation push.

American journalist Stacy Malkan , co-founder and co-editor of the US based organisation US Right to know , to be found on the web via USRTK.org. Stacy started the Bill Gates Food Tracker and is investigating how this billionnaire filantropist is pushing an outdated agricultural and food model called the Green Revolution , mainly in Africa . It is an incredible story about how Gates succeeds in selling his ‘techno-fix dreams’ around the world as solutions for climate change; Whereas if one looks critically to what Gates promotes in agriculture it is not a dream, but rather a dystopian vision.

To quote from a recent publication of the Green group in the European parliament called: ‘Gene editing , myths and reality’: “A form of emotional blackmail is being used to convince policymakers of the moral imperative to embrace new GM technologies. The promise is that these technologies will enable the development of crops that require less pesticides and are adapted to climate change. However, the same promises were also made for first-generation GM crops and proved false. New GM techniques are unlikely to succeed where “old GM” failed, because desirable characteristics  such as pest and disease resistance and adaptation to climatic changes are genetically complex traits that cannot be achieved by manipulating one or a few genes.”