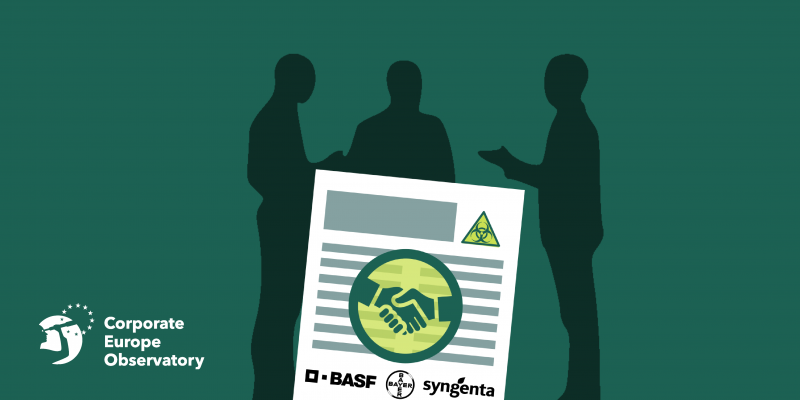 The study released today by the European Commission on products from new GM techniques like CRISPR-Cas shows that the institution has been lending its ears almost entirely to the biotech industry.

The study suggests that the current EU GMO rules may not be “fit for purpose” for some new GM applications. In its letter to the Portuguese Presidency, the European Commission says that it “intends to initiate a policy action" on plants derived from new techniques. This is a clear first step to the deregulation of these techniques, which would mean no safety checks for the environment or public health, nor consumer labelling.

This outcome cannot be seen separately from the decade-long lobby campaign by the GM industry and developers calling for deregulation of GMOs and in particular the new techniques.

Nina Holland, researcher at Corporate Europe Observatory said: “DG SANTE has clearly listened more to the biotech lobby than to anyone else. Its study on new GMOs is yet another example of the corporate capture of EU decision-making. This started right from the Commission's extremely biased stakeholder consultation that fed into this study, favouring industry voices.”

The Commission is buying into the biotech lobbyists' claims of benefits that they say new GMOs will have for sustainable agriculture. However, no application has yet been made for a new GMO that presents a credible solution to any of the pressing problems faced by agriculture today. Instead, the first GMO made using CRISPR-Cas for which  an authorization demand has been made, is a maize that is tolerant to the pesticide glufosinate.(1) Herbicide-tolerant crops represent one of the most unsustainable production models that the European Green Deal was supposed to end.

Nina Holland: “From legal trickery to devising slick communication campaigns, from presenting itself as the “voice of science” based on misleading information to behind-closed-doors meetings with hand-picked officials from EU member states, the biotech industry has used every tool from its toolbox to convince the EU institutions of the ‘need’ for deregulation. But this attempt to deregulate new GM techniques means a threat to the environment, public health and consumer choice and therefore contradicts the European Green Deal objectives”.

Background:
With the European Green Deal and the Farm to Fork Strategy, the Von der Leyen Commission has committed to a fundamental shift away from industrial agriculture as we know it today. With a 50 per cent pesticide reduction target, and a 25 per cent organic agriculture target by 2030, business as usual is no longer an option. This creates an existential crisis for those corporations that are dominant both in the pesticide and in the commercial seed market, notably Bayer, BASF, Corteva (DowDupont) and Syngenta (ChemChina). These corporations are set to lose a large share of their profits from selling pesticides, and are therefore looking for a new business model: increase profits from the seed business. To have new GMO seeds without regulatory oversight, but still patented, would surely serve that aim.