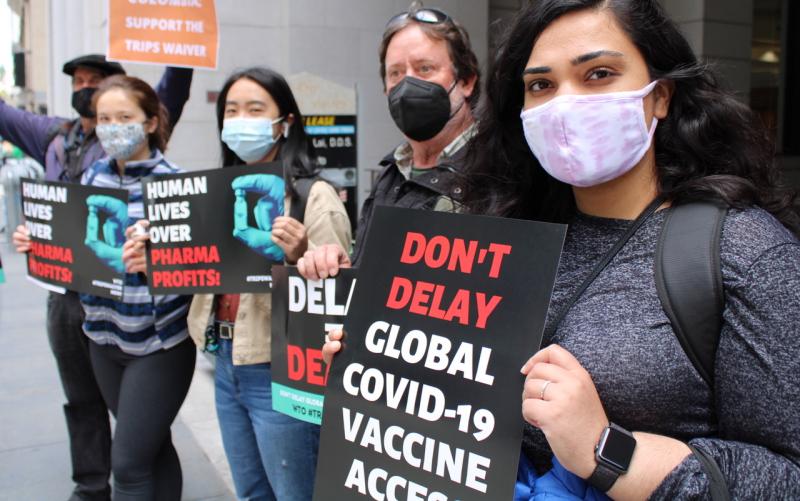 Lobby Watchdog Corporate Europe Observatory (CEO) today publishes evidence that the EU Council of Ministers decided its position on patents on covid-19 vaccines (as well as therapeutics and diagnostics) in secret on 20 May, to prepare for ongoing global negotiations on the crucial matter. Despite huge public interest and debate on this issue, MEPs and national parliamentarians were kept in the dark about this discussion.

Next week will be an important one for the European and international debate on the TRIPS waiver – the proposal to suspend intellectual property rights on COVID vaccines and medicines temporarily: the European Parliament will have a plenary vote on the EU position on Wednesday June 9. And a new round of WTO TRIPS Council meetings will start the day before. The US’s new position of supporting partial suspension of intellectual property rights has given the negotiations real momentum. The EU – where several of the vaccines were developed – is now under pressure to follow suit. (1)

The new research by Corporate Europe Observatory shows that not only have EU ministers had minimal  discussions on one of the most important policy questions of our time in the Council, (2) but the one time they did discuss this issue, they preferred to do it in secret. When preparing a meeting of the Council of Ministers, the agenda must be sent to – among others – national parliaments, and is also made available to the public on the Council website. Yet neither the agenda circulated to parliaments nor the agenda on the Council’s website give any indication such a discussion took place. None of the supporting documents for the meeting make any mention of the issue. Nor do the official conclusions from the meeting. But thanks to leaked German government documents, we now know that the discussion did take place.

At the meeting, the European Commission got the green light to stick to the line followed so far – one that is coming under increasing pressure internationally. It is also coming under pressure from parliaments across Europe. On such a contested issue, the Council should not be allowed to keep such important discussions out of the public eye.

This comes on top of earlier revelations that, after lobby meetings with EFPIA, the European Commission basically agreed to the wishes of the pharmaceutical industry (3). The biggest pharmaceutical companies have, unsurprisingly, proved to be staunch opponents of sharing technology on COVID vaccines and medicines. These revelations also show that the industry claimed, in the early stages of the vaccine roll-out, that manufacturing and distribution were under control – and that there was thus no need to share technology to increase capacity to manufacture vaccines. This rosy image presented by Big Pharma contrasts starkly with the EU’s experience this year of a slow and bumpy vaccination rollout, and with today's reality of significant lack of supply both in the EU and internationally.

“The global negotiations on patents on vaccines, medicines and diagnostics is one of the most important negotiations currently taking place internationally– this is about the best way to end the pandemic. And yet, the first and only time this was addressed by the Council, they keep it secret. The general public should not accept that, given the hugely negative impact the pandemic has had on their lives. In particular, members of parliaments, the European Parliament not least, should not let this secrecy and lack of transparency pass.”

“There is a very real risk that the EU will disrupt international talks on vaccines and medicines. We already see signs that this is happening, and it could play out next week at a meeting in the World Trade Organization. It is quite shocking to know that preparation for the event took place with a complete lack of democratic accountability or transparency.”

“The pharmaceutical industry told the European Commission in December: “Everything is in good hands, we will make sure vaccines reach everyone across the globe, there is no need for extraordinary measures. Trust us”. Today it is clear that this was not true then and it is not true now. We need significant expansion of vaccine manufacturing through technology sharing, and we need it now. Unfortunately, despite massive evidence, top EU officials keep acting as cheerleaders of Big Pharma. EU ministers could have put a stop to that. Instead they chose to pat Big Pharma on the back behind closed doors.”