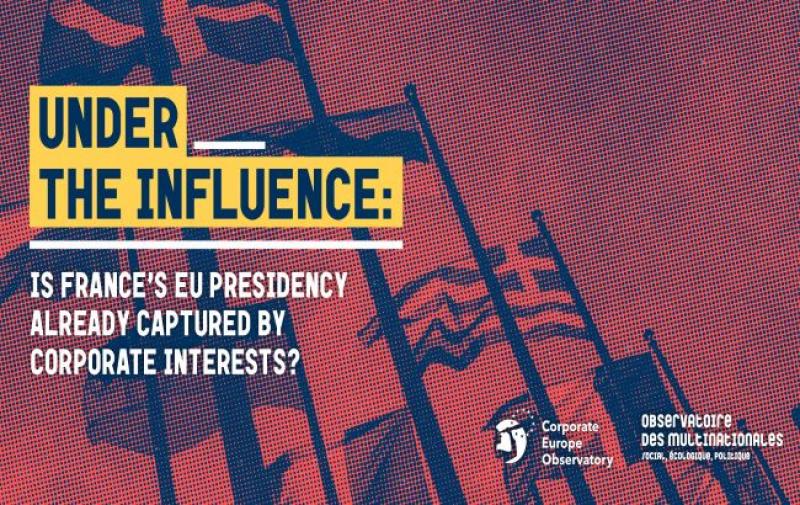 A new report by Corporate Europe Observatory and Observatoire des multinationales, released today, pulls the curtain on the preparation of France's Presidency of the EU, which will start in January 2022. It finds worrying evidence that the Presidency of the Council risks being instrumentalised in favour of a corporate agenda shared by the French government and big business.

The stakes are high for both the EU and President Macron. France’s Presidency of the EU will coincide with national elections and Europe will most likely be one of the key themes of Macron’s presidential campaign. The French Government is putting forward an ambitious agenda on a more ‘sovereign EU’ and will be dealing with important issues like Fit for 55 (climate policy), DSA/DMA (regulating big tech), platform workers (Social Europe), as well as drawing the lessons of the Covid crisis.

“Across the EU, citizens and MPs are often kept in the dark about what their governments argue for in Brussels, and the preparations for the French Presidency are no different. Meanwhile big business is being offered privileged access”, argues Vicky Cann of Corporate Europe Observatory. “It’s long overdue for the French Government to open up its own EU policy-making to public scrutiny and to stop opposing transparency reforms at the Council of the EU”.

“The preparation of France's Presidency of the EU offers yet another illustration of the increasing confusion between the public interest and private corporate interests, says Olivier Petitjean of Observatoire des multinationales. The French government is de facto pushing for an ever closer collaboration between big business and state interests, with massive public funding and political support for large corporations in sectors deemed 'strategic', such as energy, health or digital technology.”

Some key findings of this report include:

● The French Presidency is being prepared in close collaboration with French corporate interests, through lobbying meetings, public events, and seeking contributions from industry groups and think tanks (closely linked to big business), with little transparency, while civil society and the wider public are kept at bay.

● The French Government has gone as far as co-organising lobbying events with firms and trade groups, and looks set to organise more in the coming months.

● France has not ruled out the possibility that its Presidency of the EU will be sponsored by corporations, as has unfortunately often been the case with previous presidencies.

● There are numerous examples of revolving doors in the Paris-based team in charge of preparing the Presidency and in the French Representation in Brussels. These risk conflicts of interest and problematic confusion of public and private interests.