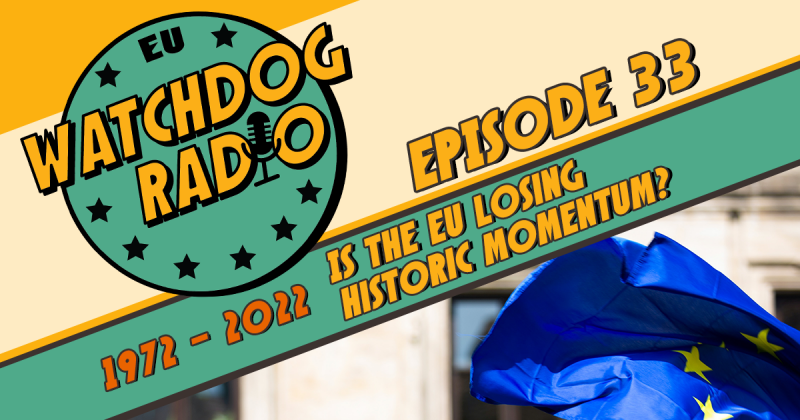 In this new episode of EU Watchdog Radio we discuss some fascinating historical events that helps to understand why the European Union functions the way it does, and why we have not made enough progress to tackle climate change, despite al the scientific knowledge we have accumulated since at least 1972.

Today is the 9th of May, this is Europe Day and thus we publish the first of several episodes to celebrate the 25th anniversary of CEO. As the European ‘powers that be’ are today celebrating Europe Day, we thought we also could use our anniversary to look back. However, instead of talking about the year 1950 when the ‘Schuman Declaration’ was signed, we will focus on 1972; A year that is at least as significant because in that year the Club of Rome published its famous report ‘Limits to Growth’. It sent shockwaves throughout the world and remains highly relevant today.

Firstly, we will discuss with historian, scholar and writer, Geert Buelens, connected to the university of Utrecht in the Netherlands. Buelens recently published a new, fascinating  book titled translated from Dutch, 'What we already knew back then' the forgotten history of 1972’. That year a unique and surprising consensus among business leaders, academics and politicians arose on the fact that eternal economic growth and population growth would make the Earth’s ecosystems crash at some point.  This consensus did not last very long and Buelens tells us why that is the case. What was the role played by the American lobby group the Business Roundtable, also created in 1972, and later the influence of 'the neoliberal revolution'?

Later we also talk to CEO-researcher and co-founder Olivier Hoedeman about the creation of the European Roundtable of Industrialists (ERT) in 1981 – the European version of the US Business Roundtable, Olivier talks about the crucial yet largely unknown role it played and still very actively plays to keep corporate, private interests at the core of EU-policies, even in times of climate urgency.  It’s getting more clear by the day why we need Fossil Free Politics.

This podcast is produced by CEO and Counter Balance. Both NGOs raise awareness on the importance of good governance in the European Union, by researching issues like the lobbying of large and powerful industries, corporate capture of decision making, corruption, fraud, human rights violations in areas like Big Tech,  agro-business, biotech & chemical companies, the financial sector & public investment banks, trade, energy&climate, scientific research and much more…