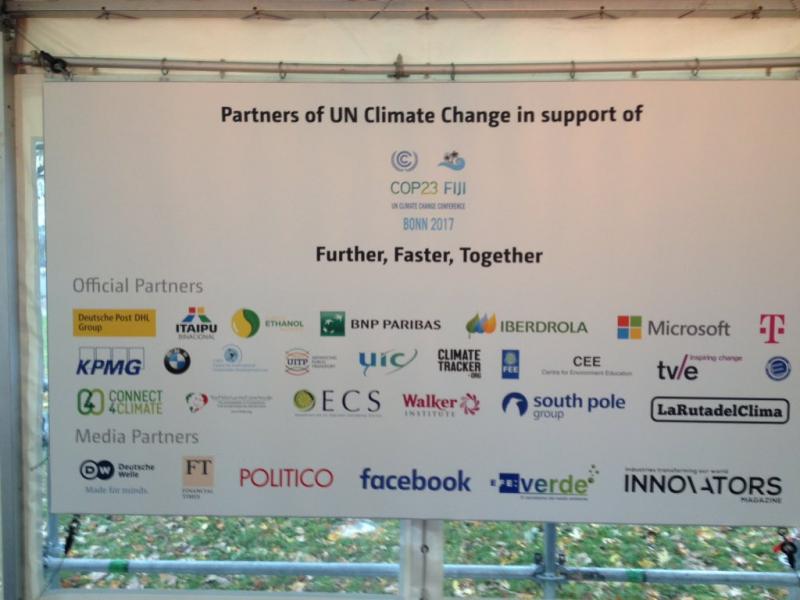 Last week’s conclusion of the 23rd UN climate negotiations  in Bonn, Germany, marks the end of another year of international  talks on tackling climate change - against a backdrop of increasingly frequent climate catastrophes. Here’s what we got up to...

At COP23, the rich countries most responsible for aggravating global warming have done their best to frustrate those on the frontline of climate change, thwarting urgent measures demanded by many states in the Global South and countless civil society actors from across the world. Corporate Europe Observatory (CEO) was there to expose the influence of big polluters and push for them to be kicked out of climate policy, as well as to sound the alarm on industry lobbying for not-so-natural gas as a climate solution.

Not coal, and certainly not gas

Many countries at COP23 pledged to pull out of coal, with the UK and Canada and their “power past coal” coalition leading the way. This is obviously good news, if not new (the UK and Canada had already made the pledge), and not ground-breaking (big coal countries like Germany, Poland, India and South Africa didn’t sign up). But hiding behind the climate-friendly rhetoric lies something far more sinister: the shift from one fossil fuel to another - from coal to gas. This was industry's main message two years ago at COP21 in Paris, and has intensified since.But CEO and allies were on hand to cut through the spin. At our side event, co-organised with Friends of the Earth International (FOEI), Food and Water Watch and UKYCC, renowned climate scientist Professor Kevin Anderson made it clear that gas is neither ‘clean’ nor climate friendly, and definitely not a 'transition' or ‘bridge’ fuel  as industry likes to claim. Presenting his new study on gas, Anderson showed that to stay below a global temperature rise of 1.5°C, as agreed in Paris in 2015, there is no room for more gas, particularly in Europe.

Worryingly, the EU is embarking on a massive new gas infrastructure programme, that includes new pipelines and liquefied natural gas (LNG) facilities. Community representatives fighting gas fracking in the UK and South Africa were sat alongside Professor Anderson,  highlighting the environmental and social damages caused by fracking and to  speak about the way it affects land rights struggles and local sovereignty. The EU's infrastructure plans will not just lock Europe into 40-50 more years of fossil fuels, but have the same effect in gas-supplyingt countries , where it drives demand for more fracking (eg in South Africa and the UK)  and continuing conventional fossil gas exploitation (eg in Mozambique, where new gas discoveries risk to threaten local fishing communities).

CEO had the chance to present its new report, the Great Gas Lock-in, exposing the industry lobbies in Brussels behind this new push for gas infrastructure. The gas industry spent more than €100m on lobbying in 2016 alone, and had more than a thousand lobbyists on its payroll. This has translated into slick PR campaigns, which present gas as a climate solution despite its dirty carbon footprint - one that is as big as that of coal. Unfortunately the European Commission and national governments have welcomed the gas industry with open arms in Brussels, in national capitals and most recently at the Bonn climate talks.

Luckily for all those concerned about the impact of new gas infrastructure, the new [gas]tivist network was also present at COP23, where they organised a series of actions inside and outside of the negotiating halls to call out gas industry spin. One stunt targeted the European Investment Bank (EIB), which is considering a €2bn loan to the controversial Trans-Adriatic mega gas pipeline (TAP). Protesters disrupted the EIB speaker, calling on the bank to not fund TAP or any new gas pipelines, as well as amplifying messages of solidarity with the communities along the proposed route.

Two days before the event, the Italian military had locked down two villages in South-East Italy, suspending basic rights,  in order to stop locals getting in the way of the construction. The intervention at the EIB event was part of a coordinated effort across Europe and North America to stand with the NoTAP movement. Unfortunately TAP is just one of many pipelines and gas infrastructure projects to which the EU is giving its political and financial support as a result of its close relationship with the gas industry.

Industry inside the talks

Similarly to previous years, the fossil fuel industry was sponsoring the UN talks. Iberdrola, a Spanish utility with substantial gas investments in Europe and Latin America, used the opportunity to rebrand itself as green, as did gas financier BNP Paribas. The gas industry’s presence at COP23 was massively helped by the likes of the International Emissions Trading Association (IETA), the International Chamber of Commerce, Business Europe and other fossil fuel lobbyists including big polluters on their delegations. In side events at the IETA pavilion, gas multinationals like Shell and Chevron had the opportunity to push false solutions and pie-in-the-sky techno-fixes that would stop us moving away from fossil fuels and keep the gas industry in business.

Many national governments also did a fine job of promoting gas, with Russia’s pavilion more like a brochure for Gazprom and the Nord Stream II pipeline. Likewise, the UK’s pavilion was sponsored by Barclays, one of the main financiers of fracking in Britain. The US, not to be outdone, did its best to bring the gas, coal and nuclear industries into the talks, using their only side event to provide space and speaking time to dirty-energy executives. Unsurprisingly, protesters interrupted the event, before turning their back and walking out, leaving an almost-empty room behind them.

At side event in Russian Pavilion, more like shop window for @GazpromEN & @NordStream2. At least they're upfront about intentions! #NoNewGas pic.twitter.com/KEtNISP0uN

COP23 was yet another example of how close the coal, oil and gas industries are to our governments. We all know Exxon’s CEO, Rex Tillerson, went straight through the revolving door and into Trump’s cabinet, but the Netherlands’ new Finance Minister used to work at Shell. And the head of the EU delegation at the talks, Miguel Arias Cañete, used to be the President of not one but two oil companies while a parliamentarian in Spain. The climate talks are as much about protecting a country’s business interests as they are about tackling the climate, and that creates a serious conflict of interest when it is those business interests causing climate change.

A report co-published by CEO just before the talks highlights how Big Polluters, including the gas industry, have been holding back the progress at the UN, and calls for them to be excluded from climate policy making. But tackling conflicts of interests was not actually supposed to be on the COP23 agenda. The Fiji Presidency, however, opened a space for it, known as the ‘Talanoa Dialogue’, giving an unexpected chance to progressive countries and civil society groups to reaffirm their desire to kick polluters out of the talks. 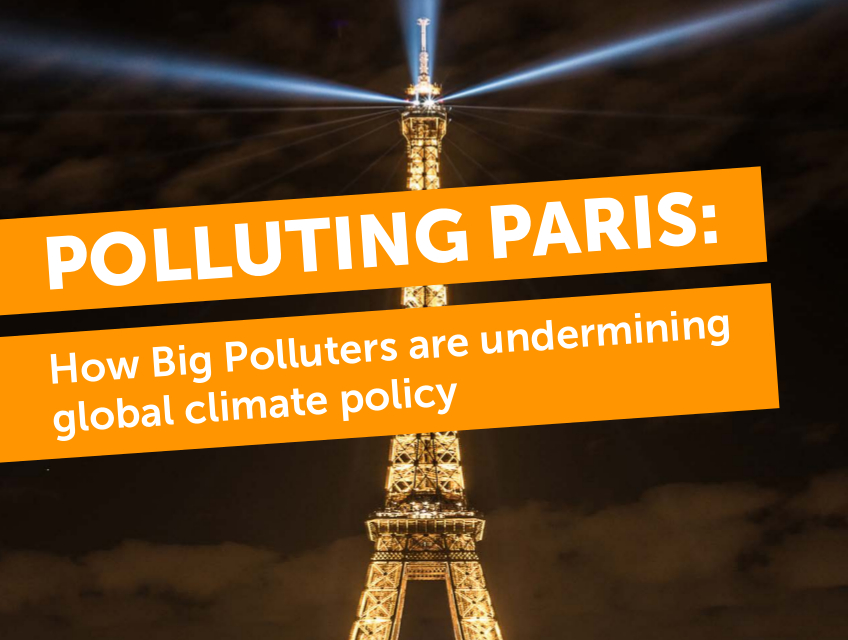 During the dialogue, a representative of Climate Justice Now! emphasised that the power of some corporations was greater than that of many countries. Swedish Green MEP Max Andersson also took part in the debate, pointing out that “there is nothing strange” in having a conflict of interest policy, in fact, “it is one of those things you should have”. A few months prior, he succeeded in getting the European Parliament to back his call for a conflict of interest policy at the UN climate talks, which EU Climate and Energy Commissioner Cañete has consistently blocked. Is it any surprise given Cañete’s oil industry past and his current penchant for gas industry lobbyists?

Inside the talks, industry has been pushing back, claiming that they are part of the solution and calling for even greater and more formalised participation in the UN negotiations - a prospect which would be catastrophic  for the climate.

The negotiations may have finished late last Friday night, but the fight goes on. The next battle regarding conflicts of interest will see negotiators return to Bonn in May 2018 for the UN intersessional meeting. Governments and stakeholders have been asked to submit proposals in advance on how to tackle the problem. Expect a fiery discussion.

Many fighting for public rather than fossil fuel interests hope that the UNFCCC can learn from its sister organisation, the UN’s World Health Organisation (WHO). Facing the excessive influence of the tobacco industry, the WHO created a firewall to protect public-health policy makers from tobacco lobbyists, not just at the UN level but also at national level. If applied to representatives of fossil fuel interests at the UNFCCC, such a policy would deal a heavy blow to the political influence of Big Polluters. This explains why they are fighting back so hard.

In the meantime, the fight  against new gas infrastructure and the excessive influence and privileged access of the industry behind it continues back in Brussels. The European Commission is set to announce its new energy infrastructure plans, which are predicted to as as gas friendly as ever. Still, there is no doubt that Bonn will be back in the spotlight next May, and much is planned between now and then, so watch this space! 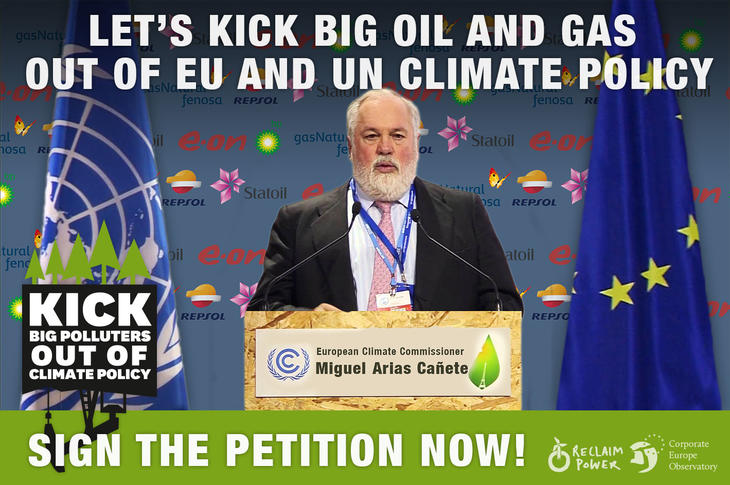