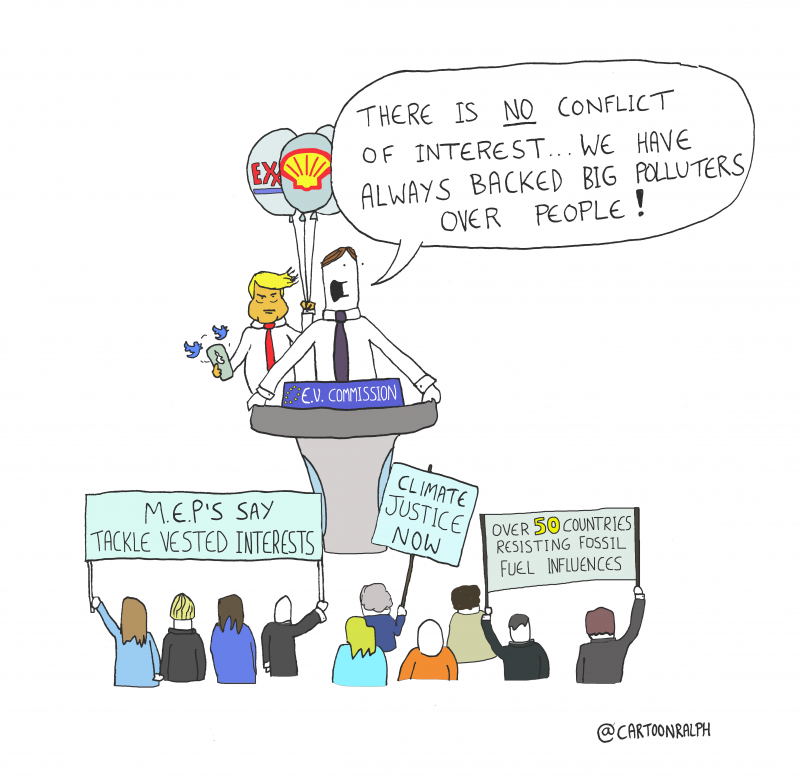 EU steps back from Trump & Polluters at UN climate talks

Should fossil fuel representatives be allowed into the UN climate talks, or do we need a conflict of interest policy to protect the process? Negotiators spent much of the last two weeks fighting over that very question as part of the latest round of talks in Bonn, Germany. While governments representing nearly 70 per cent of the world have demanded a robust conflicts of interest policy, the US tried its best to kill the proposal dead.

However, despite US efforts, the negotiations are still alive and will resume next June. Thanks to bottom-up pressure the European Union stepped back from supporting Trump and his big polluters’ agenda, but fell short of backing calls for a conflict of interest policy. As its delegation returns to Brussels, expect pressure back home to intensify.

EU under pressure from start to finish

The European Union has traditionally sided with the USA in blocking progress on addressing conflicts of interest. However, calls for the EU to stop supporting Trump had been mounting through April, with open letters from 88 MEPs and 100 civil society organisations respectively, as well as thousands of US citizens signing a petition to call on EU negotiators not to back their fossil fuel-friendly President. All three calls were handed to the EU delegation in Bonn on the second day of the intersessional talks, which are preparing December’s high-level talks, COP24, in Katowice, Poland. The following day a hard-hitting report from the Greens in the European Parliament exposed the systemic revolving door between high-level officials in Europe’s capitals and the fossil fuel industry. The next morning as delegates arrived, they were confronted by CEO's giant satirical cartoon (see main image) as well as protestors calling on the EU to ‘dump Trump’ and support a conflict of interest policy. Stunts continued throughout the two weeks, while social media was alive with #conflictofinterest tweets and Facebook posts.

When the specific negotiations about which actors should be allowed to participate in climate policy-making or not began*, speakers representing women and gender, climate justice groups, indigenous peoples and youth groups** spoke passionately about protecting the UN process from fossil fuel interests. Eilidh, speaking on behalf of YOUNGO (Youth NGOs) called out the “systemic problem that has roots far in advance of these intersessionals” posed by “vested financial interests that are undermining the goal of the convention”. The representative from big business, speaking on behalf of the US Council for International Business, unsurprisingly thought everyone should be allowed into the talks, no matter which industry.

Countries from the Global South tried to move things forward, proposing that governments agree in principal to discussing a framework which could address conflicts of interest. Ecuador took the lead, supported by other Latin American countries and Senegal on behalf of the African Group of Negotiators. However, the US dug its heels in and proceeded to block all attempts at facilitating a formal discussion, falling back on the support of other Global North polluters Australia, New Zealand, and Norway. As a result, the session's draft conclusions are admittedly weak, as they are agreed by consesus. The words “conflict of interest” are conspicuously absent, but countries did agree to restart negotiations next June based on written submissions. Given the behind-the-scenes pressure and dirty tricks applied by team Trump, escaping to fight another day was a victory for countries in the Global South keen to tackle the toxic influence of the fossil fuel industry.

Another big victory was the EU pulling its support from the US and other Global North polluters. In previous years, the EU played the ‘good cop’ to the US ‘bad cop’ in blocking progress on addressing conflicts of interest. This time round the bottom-up mobilisations, actions and general noise created around the topic meant the political cost of being seen to support Trump was just not worth it. However, although it stepped back from Trump, the EU still did not actively support advancing a conflict of interest policy, despite people’s demands.

Turning up the heat back in Brussels

Who gets to participate will be officially discussed again next June at the intersessionals. But between now and then are still two other rounds of talks when it could unexpectedly come up, including COP24 in Poland. Whenever that moment might be, the 100 groups in Brussels and national capitals who signed the open letter demanding a clear conflicts of interest policy expect the EU to go further. Not just at the UN climate talks but also at home.

The European Union, led by Climate Commissioner Miguel Arias Cañete, claims to be a climate leader yet the same fossil fuel corporations profiting from climate change are at the heart of its climate and energy policy-making process. The gas industry is a case in point: the same companies building and operating pipelines and other gas infrastructure are writing EU gas policy hand-in-hand with the European Commission. As we head to COP24, expect the heat to be turned up in Brussels, with conflicts of interest in climate policy-making pouring fuel on the flames.

*Part of the formal discussions on ‘enhancing non-Party stakeholder engagement’ under the agenda item on ‘Arrangements for Intergovernmental Meetings’, or AIM