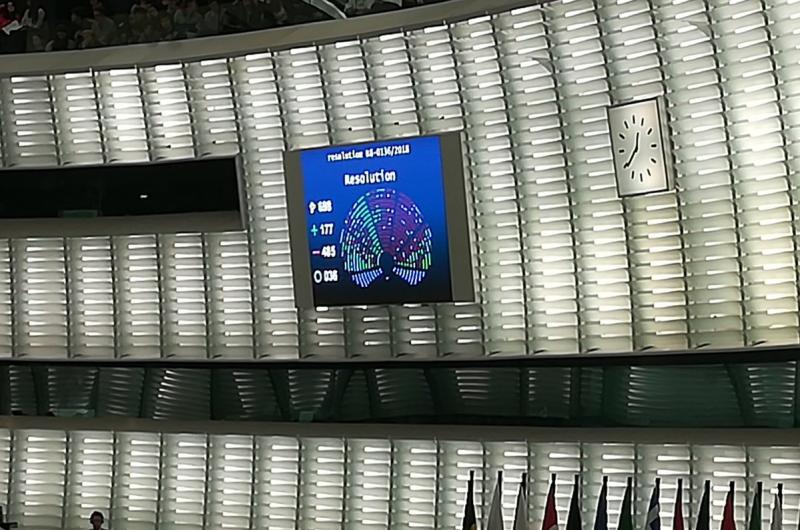 The beginning of a Parliamentary rebellion?

25% of MEPs stands up to gas lobby

177 Members of the European Parliament took a stand in Strasbourg yesterday, voting to not give the EU's money and political support to over a hundred new pipelines and other gas infrastructure projects. Unfortunately for them, two-thirds of MEPs (485) refused to support their stand, meaning the climate-wrecking gas projects will be included in the European Commission's latest list of 'Projects of Common Interest' (PCIs). Had they succeeded, the Commission would have been forced back to the drawing board to propose a new PCI list for gas. The original list was actually drafted by industry, and building the infrastructure will earn it huge profits. It being voted through is just another example of gas lobby influence over the European Parliament. CEO takes a look into that influence.

In 2016, the latest year we have figures for, research by CEO shows the gas industry spent more than a hundred million euros (€104m) on lobbying in Brussels, and employed more than a thousand lobbyists (1,060). By comparison, public interest groups lobbying against new gas infrastructure managed just 3% of industry’s spending (€3.4m).

The gas lobby has traditionally thrown a decent amount of resources at trying to influence the European Parliament. We’ve taken four examples from our recent report on the lobbying firepower of the gas industry:

Industry trade association, GasNaturally, traditionally organises its yearly 'GasWeek' in the European Parliament itself! A week-long programme of public debates aimed at European policy makers, it has taken place in both Brussels and Strasbourg with MEPs regularly hosting and speaking at the events.

When key pieces of legislation come through the Parliament, the gas industry ensures that MEPs know which amendments to put down. According to a Parliamentary source, lobby group the European Network of Transition System Operators for Gas (ENTSO-G) supplied draft amendments to multiple MEPs on the recent Security of Gas Supply Regulation as it passed through the European Parliament. The industry group was also present during a Shadow Rapporteurs’ meeting, a highly sensitive space where compromises are thrashed out between the political parties. ENTSO-G's proposal for emergency gas supply routes – extra dedicated pipelines – was eventually proposed by three different political parties and made it into the final regulation, meaning even more gas infrastructure and more profits for ENTSO-G members.

One of the Projects of Common Interest on the approved list was the ‘Southern Gas Corridor’, the mega pipeline that, if built, would stretch 3,500km from Azerbaijan to Italy. It is part of the Commission’s plans to ‘diversify’ gas supply away from Russia, relying instead on BP and state-owned Azeri energy company SOCAR’s gas wells in the Caspian Sea. Inconveniently for the EU, the Azerbaijan regime is notorious for human rights abuses and repressing opposition, a fact which could have stalled the pipeline deal back in 2013, had it been made public. Luckily, Azerbaijan is also notorious for whitewashing its international reputation through 'caviar diplomacy', bringing European officials to Baku and showering them with gifts, including silk carpets, gold, silver, and kilos of caviar. The same year it was decided the last leg of the Southern Gas Corridor would end in Italy, via the Trans Adriatic Pipeline (TAP), there were elections in Azerbaijan with wide-spread reporting of vote-rigging and repression. Yet Italian MEP Pino Arlacchi returned from Azerbaijan as head of a European Parliament delegation, and – defying all independent observers on the ground –  declared the elections “free and transparent”. When later grilled by Parliamentary colleagues about the glaring discrepancy, he claimed he was trying to “defend” Italian interests in the region.

PR companies working for the gas industry are keen for former political insiders to join their ranks, bringing an intimate knowledge of policy and processes, as well as an ample network of contacts. One such example is Constantine Levoyannis, who until October 2014 was a political advisor to MEP Niki Tzavela, at the forefront of the fracking battle in the European Parliament. A month after he stopped working at the Parliament, Levoyannis became a Senior Consultant at FTI Consulting, one of the biggest PR firms in Brussels. FTI's clients include the Trans Adriatic Pipeline (TAP) Consortium as well as fracking enthusiasts ExxonMobil and Cuadrilla. Levoyannis has since been made a director at FTI Consulting, as well as head of the Brussels branch of think tank, the Greek Energy Forum, promoting regional oil and gas projects such as TAP, and director of Public Affairs and Communications at French gas network operator, GRTgaz.

Beginning of a fight-back?

The gas lobby doesn’t limit itself to the European Parliament, but exerts influence over the European Commission and national governments in equal measure (see the report). But the European Parliament may be where it comes unstuck. The 177 MEPs who voted in favour of sending the European Commission going back to the drawing board with its industry-drafted list of gas projects weren’t just pro-climate Greens, either. While 49 did come from the Greens-European Free Alliance, 48 came from the centre-left S&D (Social Democrats) and 26 from GUE/NGL (the left group). There was also a smattering of Liberals and right wing groups, although notably no members of the Centre-Right Group, EPP (two members abstained, and the rest voted with the gas industry).

Approving the PCI list has been transformed from a technical procedure into a highly political issue, leading to debates and motions in both the Committee level as well as plenary (this was the first time the PCI list - which is presented every two years - has been voted on in plenary). It is a great platform on which to build, and a credit to those MEPs, grassroots groups and organisations - especially Food and Water Europe and Friends of the Earth Europe - who fought to get it on the agenda and force a public debate.

Keeping the gas industry away from policymakers

That 485 MEPs voted for a new generation of fossil fuel infrastructure, despite the EU’s climate commitments under the Paris Agreement, underlines the urgency of ending industry over climate policymaking. Not just in Brussels but also at the stalling UN talks. But here the European Parliament is again taking the fight to the gas lobby. Last October it voted in favour of a resolution calling for the vested interests of the fossil fuel industry to be addressed at the UN climate talks. As it stands, it is the European Union, led by the Commission - together with countries like the US and Australia - blocking progress in drafting a conflicts of interest policy at the UN.

We will not reach the ambition we need - either at EU or UN level - if those with a direct financial interest in the continued use of fossil fuels are involved in shaping how we move away from them. At the World Health Organisation (WHO), they created a firewall between tobacco lobbyists and public health officials because industry lobbying was holding back necessary ambition. Such a measure, known as Article 5.3 within the Framework Convention on Tobacco Control, is needed to protect climate policymaking. We are not there yet, but 177 MEPs saying no to the gas industry agenda and the whole Parliament calling for vested interests to be tackled at the UN level is a solid place to start.

Dear CE,
Can you supply a link to the actual vote? Can't seem to find it but want to dig into it a bit more.

Thanks in advance.
Stephan

Hi Stephan, you can find the
CEO

Hi Stephan, you can find the break down on the vote watch website here: https://www.votewatch.eu/en/term8-objection-to-commission-delegated-reg…