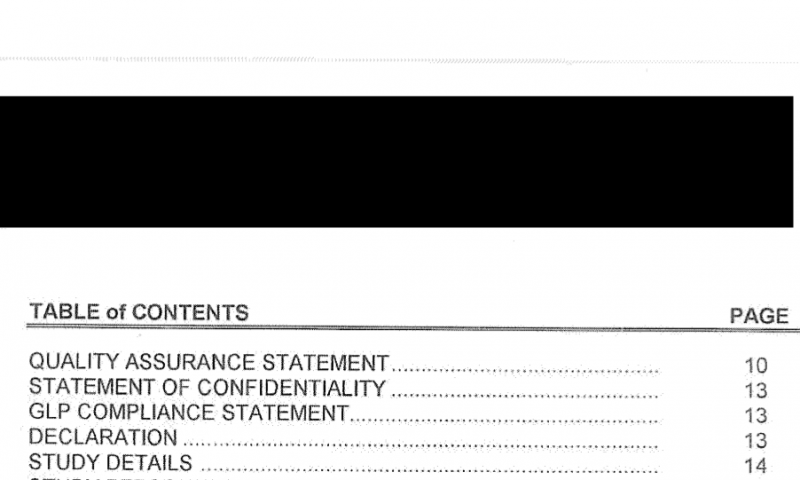 Glyphosate specialists: EFSA’s data disclosure better than nothing, but of little help

Glyphosate specialists consulted by CEO argue that EFSA’s data disclosure to CEO could in principle allow limited scrutiny on the agency's glyphosate assessment work, and some insights, but in practice the data is very difficult to handle and cannot be used for publication, making it impossible for scientists to use.

In December 2016, the European Food Safety Authority (EFSA) decided to disclose to Corporate Europe Observatory elements of three important industry studies it had used for its assessment of glyphosate, a controversial pesticide. These studies, it argued, had contributed to explain differences between its assessment of glyphosate as relatively safe and the “probably causing cancer to humans” assessment of the World Health Organisation's International Agency for Research against Cancer (IARC).

The data transparency issue has been central to the EU glyphosate controversy, to the point that more than 700,000 EU citizens (as of today) have signed an European Citizens Initiative asking that, unlike the current system where industry provides the data used for public evaluations and fights disclosure, “the scientific evaluation of pesticides for EU regulatory approval is based only on published studies, which are commissioned by competent public authorities instead of the pesticide industry”.

EFSA publicly promised to CEO (and Green MEPs who also requested such data) that it would finally release some of the data from these three studies and that “the information will be sufficient to enable a third-party scientist to scrutinise the evaluation of glyphosate that was carried out by EFSA and EU Member States.”

Was that true? The data shared by EFSA came with challenges:

- the documents were image pdfs: it is impossible to machine-search them, or import the data in any other software.

- numerous, important sections of the documents were redacted by EFSA for legal reasons (see complete list of redacted sections), including even the summary, methodology and conclusions.

- Anyone could be sued by industry for publishing it: even though the arguments do not add up in this case, legal experts still consider that existing EU legislation and case law would enable the companies to sue for the disclosure of such data with a chance of victory.

So we did not publish it for now, and sent what we received to a number of scientists having published on glyphosate, asking them to assess whether EFSA’s disclosure was sufficient to enable scrutiny. The responses we received were, overall, negative: even if in principle the disclosure could allow some partial scrutiny, and enabled some insights, in practice the data could not be used for publication, making it impossible for scientists to utilise.

Robin Mesnage, from Kings College, who has published extensively on glyphosate1, said:

“I don't know if one can say that analysing this data would mean auditing EFSA's work, as they simply use the work provided by the BfR [Germany's Federal Risk Assessment Institute], itself relying on what the Glyphosate Task Force gave to them.

I think it is possible to check how the Glyphosate Task Force analysed and interpreted these studies if one compares this raw data and the related sections of the RAR dossier [the Risk Assessment Report, in this case, is the document produced by the BfR and sent to EFSA for the EU level assessment], even though this would be a titanic undertaking.

The data are in a format that is impossible to process, one would need to take all the data from the hundreds of tables contained in each study and retype it in spreadsheets to re-do the statistics. That would probably take about a year for one person full-time.”

A scientist who published on glyphosate but who wished to remain anonymous said:

“It would be a daunting task to try to determine whether the EFSA accurately represented the content in the three documents that were sourced for the study.

One would have to set aside some serious time to pursue this in depth, and with the chance of a lawsuit if they were to disclose information that they find. That certainly leaves a scientist disinclined to pursue such an enterprise.”

Christopher Portier, a retired leading environmental health and carcinogenicity specialist who was an “invited specialist” to IARC’s Expert Group on Glyphosate, and has been actively defending the IARC assessment in the glyphosate re-licensing process in the EU, said:

“The answer is no and yes. Technically, I can reproduce the lesion data (tumors and non-tumors) but I cannot reproduce the info on the materials and methods used for the study. And reproducing the tumor counts is extremely difficult and time-consuming. But as long as I cannot cite the data, I cannot use it for any publication.”

Not being able to publish means that any scrutiny of EFSA’s work would have to remain confidential, leaving EFSA free to ignore it. This cannot be a meaningful scrutiny and, obviously, the rules have to change. As Dr. Christopher Connolly, Reader in Neurobiology at the University of Dundee, Scotland, said in the context of the glyphosate debate:

“The research should be performed much earlier in the process of authorisation, with the evidence being produced by independent laboratories, the data made available to the scientific community, and the cost met by the producer.”