Recent events in Paris have lead to a changed situation for the COP 21 climate talks. A lot of the mobilisations (such as the big demonstration initially planned for the 29th of November) have been banned. The French government has declared a state of emergency which drastically changes the environment in which the COP will take place.

But people are still determined to make their voices heard. On the weekend of the 28th/29th, thousands are expected to demonstrate in climate marches all over the world. And in Paris, people will come together for actions of civil disobedience, debating, building alternatives and planning the future work of the climate movement. We need to continue, now more than ever, to engage for systemic change.

Representatives of 195 countries will gather from November 30 to December 12 in Paris for the United Nations Climate Change Conference 'COP21' to try to agree an international treaty to follow the Kyoto protocol. The UN Climate process has failed to deliver any substantial emission reductions over the last two decades. Even if the Paris talks end with the signing of a treaty, we can be sure that this agreement won't deliver the necessary measures to prevent dangerous climate change.

On the contrary, the UN Climate Process is increasingly being hijacked by big business who use climate conferences as an opportunity to greenwash their image and defend their fossil fuels-based business model. Big polluters are among the official sponsors of the talks and will be holding many side events in Paris where climate-wrecking corporations (e.g energy companies EDF and Engie, or car manufacturers like Renault Nissan) will do their best to push for false 'climate solutions'. These are not solutions at all and are based on techno fixes and market approaches that prevent real change and will lock us into dependence on fossil fuels for decades to come.

CEO is therefore part of a broad mobilisation challenging corporate influence at the COP. Together with other NGOs and grassroots organisations, we are working to expose the influence of big business on UN climate politics. From publishing background research to organising events and actions during the two weeks of COP21, we want to make it clear that climate criminals are not part of the solution. Groups are also gearing up to mark the official closure of the negotiations on December 12th. Due to the state of emergency, plans have changed but the climate movement is still determined to have the last word!

Can't come to Paris? Don't worry, you can still get involved:

Vote in the Climate Pinocchio Awards.

Which corporations are lobbying the hardest to undermine climate policies? Which are doing their best to greenwash their image? and which have the least regard for local communities? Nine companies are up for three awards and voting closes December 3rd so have your say and help shine a light on these climate criminals here: www.pinocchio-awards.org

Sign the petition to Kick big polluters out of the talks. Interested in maintaining their business model, big polluters have stalled and watered down climate policies for decades - still they enjoy privileged access to the political process! A petition is now demanding they be excluded from all access to climate talks – both at the UN and national levels. You can sign up to it here and help kick 'em out: kickbigpollutersout.org

An overview of CEO's activities in Paris:

Participation in all our tours is free - if you're interested, please mail: cop.lobbytours@corporateeurope.org More details on the tours are available here: http://corporateeurope.org/climate-and-energy/2015/11/corporate-cop21-sp...

1st December: Workshop for journalists on Corporate Capture of the COP. We're running this workshop with Observatoire des Multinationales and it will be followed by a guided tour. If you are interested, please mail: media@corporateeurope.org and we'll get all the details to you. 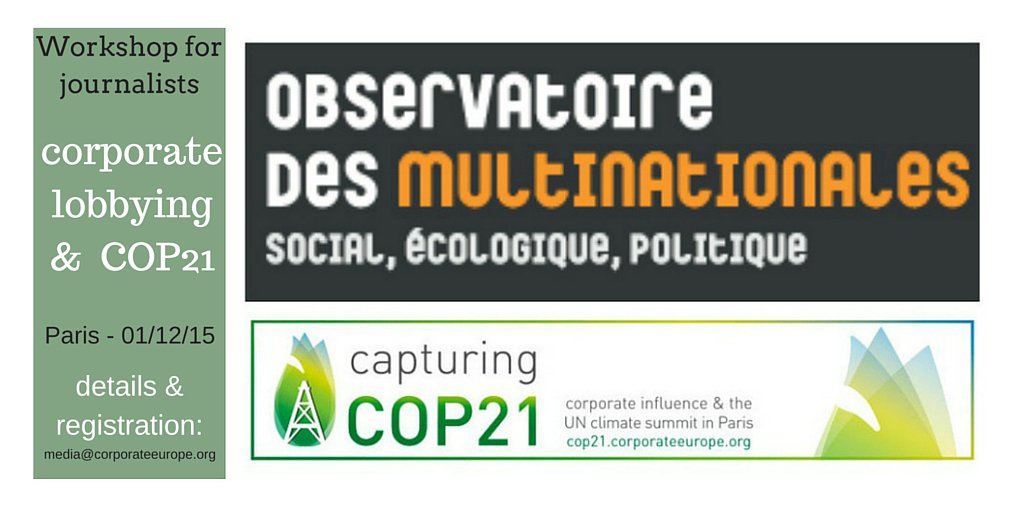 4th Decemberm, 12h: False Solutions 21 - “Solutions 21” is a big corporate expo taking place from the 4th to the 10th December. Inside the prestigious 'Grand Palais'. The likes of Engie, Coca Cola and Avril will present their false solutions to the climate crises to media and politicians, while continuing with their destructive business model. Needless to say we don't agree! A mass action supported by CEO, Attac, Solidaire, Via Campesina and others is determined to stop the opening of the expo from happening - together, and in solidarity with the people defending their livelihoods against these companies. Will you join us? https://www.facebook.com/events/496229017204710/

6th December, 14h: Towards a UN Binding Treaty on TNCs & Stopping the Trade-Investment Regime and Climate Change - workshop at the People's Climate Summit, Montreuil, organised with the Global Campaign to Dismantle Corporate Power

8th December, 14h: Free Trade, Investment, Climate and Multinational Corporations Convergence Assembly - an introduction from Susan George and John Hilary (tbc), the assembly tries to outline and bring together the common problems faced in these different areas and how we can work together the tackle them. Taking place from 14h-17h at CICP, 21 Rue Voltaire, 75011 Paris

We will also be blogging regularly from Paris and acting as a 'fly on the wall' particularly at corporate events. Whether it is the International Chamber of Commerce inviting delegates to discuss the role of corporations in emissions reductions, or the Forum “Sustainable Innovation” sponsored by BMW, Vattenfall and others, we'll be spreading the word about what corporations are pushing for, and how they achieve their aims.

Research - over the last month, CEO has published a number of reports on corporate influence on climate politics. And there are two more to come during the COP.

False Solutions COP 21: a guide - here we look at the corporate agenda behind 'Solutions COP21'

TTIP: A box of tricks for corporate climate criminals This briefing explains why TTIP, and especially regulatory cooperation, could put a stranglehold on our ability to create the energy transition required to tackle climate change.

Dirty hands on dirty deals What does COP21 and the ongoing EU-US trade negotiations, TTIP, have in common? This report shows how the very same profit hungry multinationals are trying to push through their interests in both sets of talks.

EU emissions trading: 5 reasons to scrap the ETS As the debate on reforming the ETS starts once again, it is worth recalling the woeful record of emissions trading to date. There are many good reasons why the ETS should be scrapped rather than extended to 2030 - here are our top 5.

In the run up to the Paris climate summit we looked at Big Energy's access to Miguel Arias Cañete, European Commissioner for Climate & Energy, and Maros Šefčovič, Commission Vice-President for the Energy Union, in the year since they took office. We found that big Energy has most certainly enjoyed a year of privileged access.

The Corporate Cookbook – how climate criminals have captured COP21 Now more than ever, big business is pushing to not just be at the table, but to write the texts that decide how we confront climate change. But peeling back the PR reveals that what's on offer is nothing short of a climate catastrophe, a guaranteed recipe to cook the planet. This briefing shows just when, where and how corporations are trying to capture the agenda of the UN climate talks.

This lobbyguide created by Observatoire des Multinationales, Aitec and CEO gives an overview of the biggest lobbyists in Paris, what they are pushing for during the COP, and where you can find them in Paris.

Brussels, big energy, and revolving doors: a hothouse for climate change. For this one, we took a look at how the revolving door ensures that the EU institutions remain close to Big Energy and discovered that conflicts of interest in the field of energy and climate policy are being ignored by EU institutions allowing some of the world’s biggest polluters to potentially benefit from the know-how and contact books of top Brussels insiders.

Research coming over the next two weeks:

“The climate smokescreen- European PR companies lobbying for big polluters” This report will examine case studies of PR companies working to greenwash the images of climate criminals, and lobby against real climate action.

“Polluters’ paradise - How investor rights in EU trade deals sabotage the fight for energy transition” This report will look into the risks that investor-state dispute settlement (ISDS) in trade and investment agreements poses to energy transition. While big polluters are lobbying heavily for ISDS in new trade agreements, a growing movement is turning against this corporate power grab.