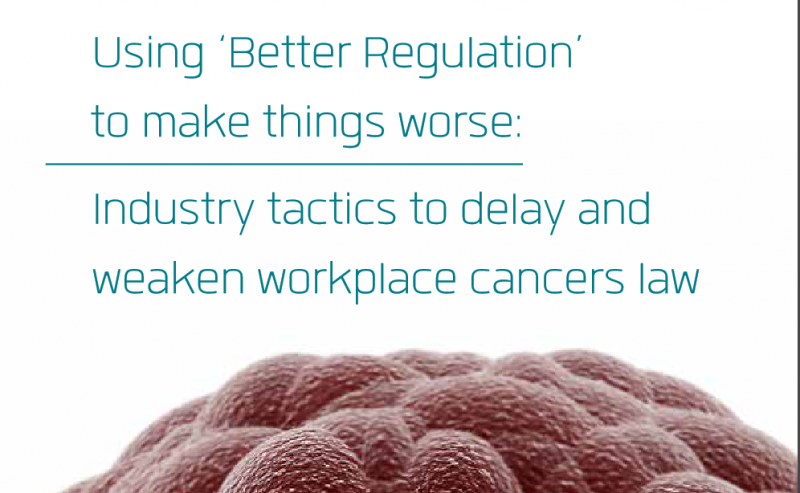 Our new report shows how industry lobbies present employee protection against work-related cancers as an ‘unnecessary’ burden on companies, and explains which tactics they use to weaken and delay the EU’s revision of the Carcinogens and Mutagens Directive. In the EU alone, over 100,000 people a year die due to insufficient protection against cancer-causing substances in the workplace, which makes this lobbying a real threat to public health.

The revision of the Carcinogens Directive is a telling example of how industry is using the rhetoric and tools of ‘Better Regulation’ to pre-empt, delay, and weaken urgently needed rules, and how it plays off regulations against each other. Industry lobbies speaking the language of ‘simplification’, ‘burden reduction’, and ‘harmonisation’ have been well received by a European Commission that is keen to ‘cut red tape’. As a result, its proposal contains far too few, and too weak, exposure limits for workplace carcinogens. The European Parliament, however, still has a chance – and an obligation - to stop worker’s lives being sacrificed for industry’s profits.

As this report outlines, the inadequate regulation of carcinogenic substances in the workplace has devastating consequences: an estimated 100,000 deaths in the EU every year. The cost to society is a minimum of €2.5 billion annually. And yet, occupational cancers are avoidable. But without strict and binding rules they won’t be prevented, for industry has little incentive to do so; the risks and costs of exposure to workplace carcinogens are borne by the victims and society. Despite this, the Commission – heavily influenced by industry lobbies – delayed taking action for ten years. Now that it has finally acted, its proposal still only contains 13 substance exposure limits (promising 12 more by the end of 2016). This is contrary to the recommendation of various member states, health bodies, and trade unions, which advise including exposure limits for at least 50 carcinogenic substances.

Analysing lobby documents on workplace exposure limits for carcinogenic substances like silica dust and ceramic fibres, among others, this report highlights how ‘Better Regulation’ is in fact an attempt to reduce the regulatory ‘burden’ on businesses, regardless of the cost to people and planet, giving industry new opportunities to steer EU rule-making in a pro-business direction. The building blocks of Better Regulation (impact assessments, stakeholder input, evaluations, self-regulation, etc) have been instrumental in industry lobbying on the Carcinogens Directive, with industry tactics including voluntary initiatives to delay regulation, attacks on studies that don’t serve their interests, pushes for greater influence via more impact assessments, and the pitting of different EU rules against each other to erode standards.

Unsurprisingly then, industry was fairly happy with the Commission’s May 2016 proposal: there are not many exposure limits, and it is not very strict. BusinessEurope urged MEPs not to slow things down by changing the Commission’s proposal. But since we’ll be stuck with these exposure limits for many years, it is vital for hundreds of thousands of workers exposed to carcinogens across the EU that we get adequate protective limits now. Thankfully, the European Parliament’s rapporteur has proposed amendments to the Commission’s proposal that go a long way towards achieving this. But it remains to be seen what improvements MEPs are willing to make: ultimately, it will come down to how they assess the relevance of costs to businesses against cost to human life.