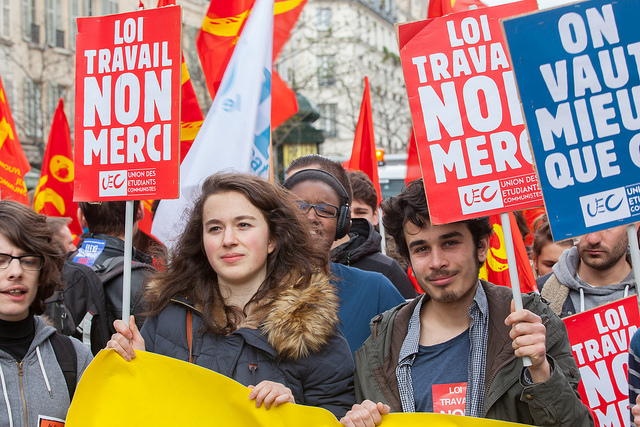 How the EU pushed France to reforms of labour law

The current struggle in France over labour law reforms is not just between the Government and trade unions – a European battle is waged. The attacks on social rights stem in no small part from the web of EU-rules dubbed 'economic governance', invented to impose austerity policies on member states.

Strikes and actions across France against reforms of the country’s labour protections, known as the El Khomri Law, demonstrate the immense unpopularity of the measures proposed by the French Government. Chiefly among them, to give preference to local agreements on wages and working conditions, when the conditions in those agreements are less favourable than the national norm inscribed in national law. This is an open attempt to undermine collective bargaining and roll back the influence of trade unions.

Ultimately, the French Government has formal responsibility for the weakening of labour protection. But there is no denying that the European Union is playing an important and perhaps decisive role in the attacks on labour rights. What we see is the EU throwing its rulebook in the French workers’ faces. Practically all the new rules on so-called 'economic governance' adopted following the eurocrisis have been applied, and make France look like a EU test-case. The European Commission, with the backing of the Council, has used the rules on member states’ deficits to exert pressure, threatening with sanctions, should the French Government not give in and seriously reform its labour laws. Simply put, France has been required flat out to ensure higher profitability for businesses by driving down wages.

How does all of this work?

First and foremost, the reforms in France are related to the country’s deficit. Like most other EU member states, the state’s finances looked pretty bad in the aftermath of the 2008 financial crisis. In 2009, a case was opened against France for breaching EU rules which stipulate that its deficit must be no higher than 3 per cent of GDP. If taken to the extreme, this 'excessive deficit procedure' can result in a fine of billions of euro, and – not least in the case of France – a severe loss of face to its EU partners.

The 'excessive deficit procedure' was given more teeth with the so-called 'Six-Pack' set of EU rules in 2011 – a key part of the austerity-focused economic governance package – which introduced a reverse majority vote in the Council: if the Commission does decide to fine a member state, like it has threatened to do to France, there will have to be a qualified majority against the measure from other member states to block it. Good reasons for the French Government to be slightly scared – and a weapon to be used in its attempt to convince parliamentarians. The likelihood of sanctions for not meeting the budget deficit targets is much bigger than in the past, when both Germany and France escaped humiliation. But how to meet the Commission’s strict targets, and how to behave to the satisfaction of the Commission, is what clearly links the El Khomri law in France to the austerity regime being rolled out from Brussels.

Being 'in the procedure', means you’re under close surveillance by the Commission, and with regular intervals, the case of the French deficit has been brought up at meetings with member states ministers, who have assessed if France (in this case) has made sufficient efforts to remedy the problem. Specific recommendations have been made, though until 2013 the labour law was hardly mentioned. The recommendations stuck to the development of the deficit, whether it went down at the required pace. But in 2013, there was a new tone in the Commission’s recommendations. France was asked to meet its deficit targets “by comprehensive structural reforms” in line with recommendations from the Council “in the context of the European Semester”. Structural reforms are no small matter. They are defined as changes that affect “the fundamental drivers of growth by liberalising labour, product and service markets”. Such ambitions were starting to be pushed on France at the European Semester.

But what is the European Semester? It is a procedure involving the Commission and the Council that ends with a set of recommendations for reforms to each and every member state, based on a proposal from the Commission. At the beginning in 2011, the recommendations were non-binding, but in 2013, a new set of rules went into force under the so-called Two-Pack, another part of the economic governance package intended to enforce austerity. One of the regulations of the two in the package was about measures to ensure deficits were corrected, and among other things, it made a link between the deficit procedure and the European Semester.  If a member state is under the deficit procedure – like France – it would have to draw up an 'Economic Partnership Programme' that includes the recommendations from the Council –typically the kind of structural reforms that would have a clear impact. If the programme is not followed, then it will have a bearing on the Commission’s decision to initiate the final phase of the deficit procedure: sanctions in the form of a fine worth billions.

So, when the Two-Pack entered into force in early 2013, the tone of the messages to France on its deficit changed. France was now asked to implement “comprehensive structural reforms” of its labour law and the pension system. This had a bearing on how France would be treated under the deficit procedure and whether it would come in for sanctions, and for that reason, recommendations started looking more like demands.

In other words: whereas earlier country specific recommendations adopted under the European Semester were just that, with the Two-Pack from 2013, non-compliance could lead the Commission to take the next step towards sanctions.

There’s more.
In the early stages of the eurocrisis another procedure was introduced that was to work in parallel to the deficit procedure: the 'Macroeconomic Imbalance Procedure'. This procedure allows the Commission to monitor the development of member states’ economies based on a predefined set of indicators. One of them – perhaps the most important one – measures how high the labour costs are developing (unit labour costs). If wages are not kept at bay, competitiveness suffers, and measures have to be taken, so the logic goes.

The 'Macroeconomic Imbalance Procedure' is also a potent weapon, as it can lead to a fine if a Eurozone member state crosses the line repeatedly and for a long time. And France has been in the crosshairs of the Commission for quite a while. Commission staff has investigated French labour law and identified what factors contribute “to  limiting the ability of firms to negotiate downward wage adjustment”,  and the French Government has been warned – as has many other member states – about developments in wages. In 2014, the Commission said “unit labour cost growth is relatively contained but shows no improvement in cost competitiveness. The profitability of private companies remains low, limiting deleveraging prospects and investment capacity.”

The calls for action to improve the profitability of private companies have been sent to France from Brussels on numerous occasions over the past couple of years, and have gained in strength. Thus far, the climax was in February 2015, when the Commission stepped up the procedure and singled out Bulgaria and France as the most pressing cases. The decision put France only a small step from the last stage of the imbalance procedure, the dreaded 'excessive imbalance procedure' which entails – exactly like the deficit procedure – a massive fine. If all fines are put together – from the deficit procedure and the imbalances procedure – they could amount to 0.5 per cent of GDP, or in the case of France, approximately €11 billion.

Such a prospect must be terrifying for the French Government, and in 2015, then, it would have to come up with something of substance to appease the European Commission and its partners in the Council. In March France was given two more years to bring its house in order, and if there was any doubt over the way to get there, the message to France in July was clear. Country Specific Recommendation number 6 to France under the European Semester, includes a call to “reform the labour law to provide more incentives for employers to hire on open-ended contracts. Facilitate take up of derogations at company and branch level from general legal provisions, in particular as regards working time arrangements.” In other words, the very reforms now at the centre of dispute with the El Khomri law.

The recommendation was copy-pasted from a Commission proposal;  one that struck a chord among business lobby groups. In the annual 'Reform Barometer' of BusinessEurope, a procedure set up to influence the European Semester, the French employers association MEDEF was enthusiastic about the move, and dubbed it “extremely important” in its contribution to the Reform Barometer 2016.

Who exactly has done what since the summer of 2015 is the subject of intense debate. French media outlet Mediapart suggests the German Government might have played a big role in designing the French reforms, while others believe the specifics were entirely homemade.  In any case, there is no denying that the reforms were pushed heavily by the European Union, more specifically by the Commission and the Council. And the push was based on the web of rules on member states’ economic policies, sometimes called 'economic governance', that has been spun thread by thread since 2010. The strengthening of the deficit procedure, the European Semester, the Two-Pack, and the macroeconomic imbalance procedure have all been used for the purpose they were invented: to exert maximum pressure on member states to adopt austerity policies.

There are other similar examples in Europe at the moment. In Italy and Belgium too, you see the effect of the new tools handed over to the European Union since 2010. But France is special for its size and its power in the EU. The ongoing struggle in France can be seen as a major test case for European economic governance.  If a big, powerful EU member state can be pushed to attack fundamental traits of its labour protection law, then the risk of new and stronger measures are much more likely in the future. Even if French workers are unaware of it, they’re fighting a European battle.

I added this comment to a Facebook post, but since it addresses the positioning of this otherwise fine article, I thought I'd add it on the original page: You don't want to use the word "reform" here. The word doesn't simply mean "changes in current structures and practices." It also smuggles in the implication that there's something wrong or corrupt about the current arrangement that needs changing. It is thus beloved by lazy journos, who can imply support for the proposed changes without making a case. In the US, many reporters would no doubt refer to a bill to reintroduce slavery as a "labor law reform."

This is not reform: this is accelerated deregulation. France is a fine country, but its social laws are being destroyed before our eyes. What is really strange is that millions of people are not demonstrating in the streets... How this will end, by the rise to power of far-right ?