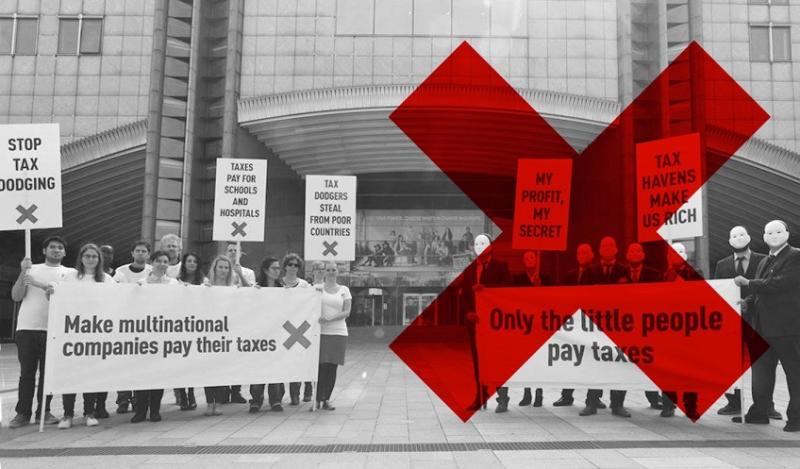 Has the issue of tax avoidance ever been as important as in the current era of (Commission-backed) austerity? Public budgets continue to be slashed for want of public money, yet the news is filled with corporations avoiding taxes at the same time as their profits are at a record high. So it should be of serious concern to Europe's 500 million citizens that the European Commission has invited to its new advisory group on taxation the very same organisations involved in avoiding it, as well as their tax advisors (again!).

Wednesday 24th and Thursday 25th are the first meetings of the Joint Transfer Pricing Forum under its new mandate, convened by the Directorate General for Taxation and Customs Union (DG TAXUD). The practice of transfer pricing – buying and selling of goods and services between different subsidiaries of a multinational corporation – makes up more than half of all global trade, but it has also been singled out as a major way to avoid tax, as companies are able to decide through intra-company trading where they make profits (low-taxation jurisdictions) and losses (high-taxation jurisdictions) and thereby slash their tax bills. Given this, one would expect the mandate would focus on the abuse of the practice by multinational corporations. But it's not. Instead the focus is on avoiding double taxation (whereby corporations pay tax twice, rather than not at all) and reducing the burden for big business. Not a good start from the point of view of a European citizen.

Equally worrying is that the work plan for the next five years appears to already have been decided by the previous group, which was even more corporate-friendly than this one, stuffed with yet more tax dodging companies. Not too promising for the few NGOs who have decided to join. But both the mandate and work plan point to a more structural problem within the European Commission as to where it gets its advice. Unfortunately for the European public, it predominantly comes from big business representatives. Unsurprisingly, said advice rarely promotes policies that get in the way of profits, even if they are in the public interest, such as a tougher tax regime, better environmental regulation or stronger labour laws.

Industry dominates – with tax dodging experts in the driving seat

The Commission decision establishing the group talks of achieving “balanced representation”. However, research into the composition shows a severe imbalance in favour of industry: not including the 28 member states, 72% of those in the group represent corporate interests (8 people), while only 17% are from NGOs (3 people). The remaining 11% represent academia (2 people). This is an improvement on the group's last incarnation, where there was zero representation from civil society or academia, but far from satisfactory – especially if one looks into who actually sits in the group.

The Rules of Procedure – seen by CEO – outline a conflict of interest policy whereby members must be excluded from the meeting if one arises on a specific agenda item (it's still up to members to inform the Chair). But the elephant in the room is clear: should tax dodgers and their advisors be in the group at all? Surely they are in a permanent state of conflict of interest. If the Commission is supposed to be acting in the interest of citizens, it should find a way to keep those with vested commercial interests – and who make no effort to hide them – away from decision making.

If it is genuinely expertise the Commission needs, it should find a way to gather this expertise while not allowing them to make recommendations or contribute to reports. Yet instead they are chairing the group and make up over two thirds of members, with full voting rights in a system decided by simple majority, which means in real terms they dictate important points such as who is vice chair (a role which entails setting the group agenda), what are the rules of operating (e.g. if the minutes are allowed to be attributed to individuals), and what the final report will say (if there is no consensus, minority voices will be noted but the majority indicated). This is just the latest example of the problem, in which DG TAXUD is a serial offender.1

Commission not even following its own rules

Despite rejecting the majority of the Ombudsman's recommendations on how to fix expert groups – including legally-binding rules on balance across all departments – the Commission has not even stuck to those measures it did agree to. Of the 18 non-member state participants, more than forty percent are not in the Transparency Register, despite promises to enforce this. As law firms currently refuse to register due to client confidentiality (revealing who they lobby for), enforcing the register requirement will leave the Commission with only one option: will it follow through and kick them out?

Conflicts of interest is an area the Commission has stated it is taking seriously, yet incredibly, a group of tax dodgers and their accountants does not constitute a conflict. Perhaps we are judging too quickly, as their conflict of interest policy has not yet been finalised, but the Commission first agreed to look at the matter in June 2013. In the meantime economically and politically important Expert Groups continue to be created.

Sources involved in the process have said the Commission did try to increase the number of civil society representatives, which could have provided more balance. But this didn't happen. Horizontal rules across all departments, with a definition of what the balance should be in each group, as the Ombudsman recommends, would certainly be a start. If implemented, it would force the Commission to face up to the structural reasons NGOs won't participate to the same degree as business.

Low civil society participation is not just a result of the mismatch in resources, despite its importance. It's also about whether it is a worthwhile use of time and resources: talking to many participating NGOs, they do not see taking part in an imbalanced group as an effective way to influence policy, and have sometimes seen their own presence as a legitimising exercise for policies they would not publicly support. Time could be better spent elsewhere. Guaranteeing groups are balanced would increase the motivation of civil society groups to participate, but lack of resources – and simply the large number of groups in existence – may mean the only way to reach this balance would be to drastically reducing the number of groups and their size. These smaller groups can then hold hearings to gather any additional external expertise.

Going a step further, anecdotal evidence suggests that the more balanced a politically and economically important group becomes, the less influential it is with the Commission, and therefore an even bigger waste of time for NGOs. An explanation can be found in the long-standing neoliberal ideology of the Commission, seen clearly today in the pro-business deregulatory agendas of 'Regulatory Fitness (REFIT)' and 'Better Regulation'. To help it continue its neoliberal mission, it primarily sought 'expertise' that was politically in-line with its goals, i.e. from big business. This includes the field of taxation, which is why the last incarnation of the Joint Transfer Pricing Forum was strictly for big business representatives, but you can also see it in the Forum's current mandate. Therefore a more balanced group – with all interests fairly represented – may get in the way of the overall political agenda, making the group less useful to the Commission and therefore to those participating (although lobbyists may argue it is still worthwhile for the access and networking it provides). This reduced usefulness to European policy makers is one reason we have seen Expert Groups being created that are not called Expert Groups, but instead things like advisory 'networks', which allows them to avoid following Expert Group rules and to keep business in the driving seat.

Ensuring Expert Groups provide the necessary advice but also serve the public interest is a political question about what is the role of the Commission and what is the mission of the European Union, and political questions take political answers. An alternative answer to the status quo, which doesn't serve big business interests, will only come from a change of direction among Europe's elite, which in turn will only happen if demanded by the European people. In the meantime, it seems the Commission will keep following its own rules (or its own interpretation of them), making it all the more urgent that the European Ombudsman sticks to hers and issues a strong final report demanding structural change across the whole Commission which civil society and MEPs can get behind. Only then will we see Expert Groups on tax not run by the same companies dodging it, with a mandate and agenda in the interest of the public and not big business.

1Even though KPMG itself is not a member of the group, a KPMG employee is listed as an alternate representative of the Prysmian group.

2Other participants have said their participation can make the difference between something being a bad and a really bad policy, thereby still making it justifiable, but nowhere near satisfactory.

1Last month TAXUD created a similarly imbalanced group aimed at tackling tax avoidance and CEO has previously complained to the Commission about other tax expert groups created and listed TAXUD as one of the worst offenders for creating imbalanced groups.