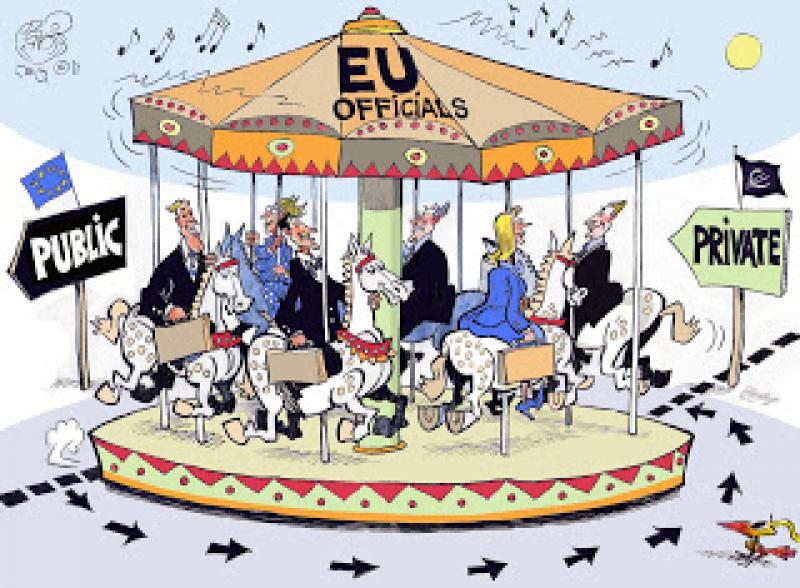 Banking on the revolving door: Rules full of loopholes for former finance officials

Behind a de-regulated financial sector and pro-banking policy decisions, there lies the story of an intimate relationship between the financial sector and the EU institutions. The revolving door phenomenon, which creates a web of interplaying interests between the lobbyists and the lobbied, as one smoothly transitions into the other, is a significant part of this picture.

The revolving door represents a threat to public interest decision making when former EU institution staff members are able to exploit their knowledge and contacts in the interests of lobbying for their new employer, providing the potential for excessive and undue corporate influence, a problem which has been called a form of "legal corruption".

This is of particular concern in the financial sector, where much needed reform is being blunted by the same finance sector interests that lobbied against financial regulation, to enable big profits (for them) by taking big risks (for society). The close ties between regulator and regulated in the financial industry, and the reluctance of the latter to embrace far-reaching structural change, have been one of the main causes of repeated financial crises and consequent social crises.

This symbiosis between high finance and government, and the negative impacts it creates, is much more widely recognised in the US, where 'there is famously a "revolving door" between Washington and Wall Street' and 'such is the interchange of personnel that it can be hard to tell where Goldman Sachs ends and the White House begins.” But the problem is also very serious in Brussels, and the policy impacts of this bubbling cauldron of conflicts of interest are no less real.

There are, of course, the big names like European Central Bank (ECB) president, Mario Draghi, and his predecessor Jean-Claude Trichet, who have taken a turn or two in the revolving door. The former is the subject of a recent complaint by CEO to the European Ombudsman, which challenges the European Central Bank over inadequately considering potential conflicts of interest, given Draghi's membership of the banking lobby ‘Group of Thirty’. Draghi's career also includes a stint at Goldman Sachs International. Meanwhile, Jean-Claude Trichet, just several months after stepping down from the ECB, was named chairman of Bruegel, a Brussels-based private think-tank working on international economy issues, famous for its preference for deregulation, and receiving a large proportion of its funding from banks and big business.

And there are other cases documented by CEO, like former Irish Prime Minister and EU ambassador to Washington DC, John Bruton, who left his EU ambassadorial role (November 2009) and accepted two new jobs which provoked the risk of conflicts of interest, at the Irish International Financial Services Centre (May 2010) and at Brussels-based lobby consultancy Cabinet DN (December 2010). Bruton is one of the subjects of CEO's recent complaint to the European Ombudsman about how the Commission deals with revolving door cases.

And we must not forget that we have also seen finance sector revolving door cases at Commissioner level, with a number of outgoing Commissioner's in 2010 moving to financial services firms, as detailed below.

The autumn of 2012 brought about a number of new finance sector revolving door cases, which are unique in two important ways: firstly, they concern very high level public officials, and, secondly, because of incomplete implementation of fragmentary regulations, they don't break any rules.

Eddy Wymeersch: Wymeersch was, until July 2010, chairman of the Committee of European Securities Regulators (CESR), the EU financial regulatory body that the preceded the European Securities and Markets Authority (ESMA), which replaced it in January 2011. Whilst ESMA is an EU body, and therefore governed by the revolving door rules in the Staff Regulations, CESR was not. CESR was an association under French law, so no revolving door restrictions were placed on Wymeersch, meaning no requirement for approval of post-employment activities, to avoid conflicts of interest. In September 2012, Wymeersch started working for the Association for Financial Markets in Europe (AFME), one of the biggest finance industry lobby platforms. To see the highest level of a European regulatory body switching sides to one of the biggest lobby efforts against financial regulation, causes serious concerns. AFME bragged that Wymeersch's “expertise and understanding of the role of European policymakers, in particular, will be invaluable to us as an advisor”. But because Wymeersch left before CESR became ESMA, he is in a legal loophole; there are no rules he could have broken, and even if he had been governed by the staff regulations, the two year notification period would have ended two months earlier. This case serves to illustrate why such loopholes should be closed.  Read more

Jörgen Holmquist: European Commission Director General of DG Internal Market and Services until 2010, and member of the Commission Task Force for Greece until May 2012, Holmquist started working for Brussels-based lobby consultancy Interel in October 2012. Interel gloated that “Jörgen's national government and Commission experience, particularly in financial services, will offer our clients an unrivalled level of insight and expertise.” No restrictions were imposed by the Commission on this move, other than taking for granted what Holmquist himself said he would not do. The result is that formerly the most powerful Commission official, besides Commissioner Barnier himself, responsible for new banking regulation following the financial crises, is advising private clients on financial services lobbying. For a consultancy that gets paid by clients to try to influence EU legislation in the interest of their profit-maximisation and preferred business models in economic and financial affairs. And yet Holmquist followed the rules to the letter, applying for permission in a timely fashion, which indicates that the problem is with the rules and those implementing them.  Read more

Martin Bresson: Bresson was the Danish government's financial services attaché during the Danish Presidency of the EU, but just two months after the end of their Presidency, moved to Fleishman-Hillard's financial services practice. Fleishman-Hillard is one of the biggest lobby consultancies in Brussels, with an impressive array of finance sector lobby clients, worth over 3 million euros per year. Fleishman-Hillard boasted that Bresson's “deep understanding of the challenges facing policy-makers” set him apart. This move occurred at a time when the outgoing Presidency is still active, as part of the presidency trio. But because the revolving door rules in the Staff Regulations do not cover staff in Member States' permanent representations to the EU in Brussels, Bresson faced no cooling off period, nor any indication of restrictions on dossiers, clients or contacts.  Read more

Bresson is not alone in benefiting from the fact that Member States permanent representations are not governed by the Staff Regulations, or any other uniform rules, as their staff are employed by their national governments. Several UK permanent representation staff have jumped into financial lobby jobs, for example, Mark Foster joined lobby consultancy Kreab Gavin Anderson in 2011, from his previous position as senior European Parliamentary Officer focussing on economic and monetary affairs. Similarly, Parvez Khan joined consultancy g+ in September 2011, from his former position as UK financial attaché, dealing with hedge funds and private equity, short selling, derivatives and markets infrastructure, as well the development of the new European Supervisory Authorities.

Challenging the Commission for the real numbers

The cases above are only an anecdotal indicator of the scope of the financial sector revolving door in Brussels. In order to get a more comprehensive picture, CEO has been working with MEPs who are also concerned about this issue, and who plan to submit a parliamentary question to the European Commission, asking how many Commission staff have moved into private sector finance industry jobs or financial lobbying positions in the last two years, and what action the Commission is taking to prevent conflicts of interest from arising. The pressure to block the revolving door is building from other directions as well, from the complaint submitted by CEO and other NGOs to the European Ombudsman about the Commission's failure to adequately implement the existing revolving door rules in the Staff Regulations, to a report by the European Court of Auditors criticising EU agencies for failing to take adequate action to tackle 'revolving door' type conflicts of interest. This growing pressure recognises that we need better rules to regulate the revolving door, as well as rules that are actually taken seriously by those charged with their implementation.

The revolving door between the EU institutions and the finance sector is not only a recent phenomenon; it is at least as old as the erosion of financial regulation. CEO did a little digging into financial revolving door cases over the last few decades,* the same period during which brute neo-liberalism and deregulated markets became the norm. The parallel processes of increased power to finance lobbyists and decreased strength of financial regulation has enabled banks to take huge risks, and make huge profits, while the costs fall squarely on the shoulders of society. Below are some examples:

This list is far from an exhaustive history of the financial sector revolving door, but it gives some select examples of how the revolving door operates between public institutions and the financial industry. The same process can be seen at the national level, for example, the revolving door between between lucrative banking jobs in the City of London and the UK's financial regulator, the Financial Services Authority (FSA), which has resulted in the FSA being captured by the commercial interests of the industry it is meant to regulate. This has repercussions in Brussels too, where the FSA lobbies heavily, resulting in MEPs tabling pro-industry amendments that came directly from the FSA, as well as FSA staff members being seconded to EU institutions and committees.

The overall effect of the revolving door in the financial sector, be it at EU level or national level, is that too close links between public institutions and private interests are undermining the achievement of proper regulation of the financial sector. Once again, this highlights the need for robust rules and scrupulous implementation, to ensure that decisions relating to banking and finance, which affect all of us in our daily lives, are taken solely in the public interest.

Congratulations on this
John

Congratulations on this illuminating article!!! My suggestion would be that in future articles that you accompany your wonderful argumentation with more academic references on the issue --and there are many (something that would finally give the reader a serious incentive to academically delve deeper into the subject). Best, JK

Thanks for this very interesting article! You could also mention that Jean-Claude Trichet, when he left the ECB's presidence, became chairman of the Trilateral Commission's European Group (founded by David Rockefeller, and full of big business members). Mario Draghi also used to be a Trilateral member.