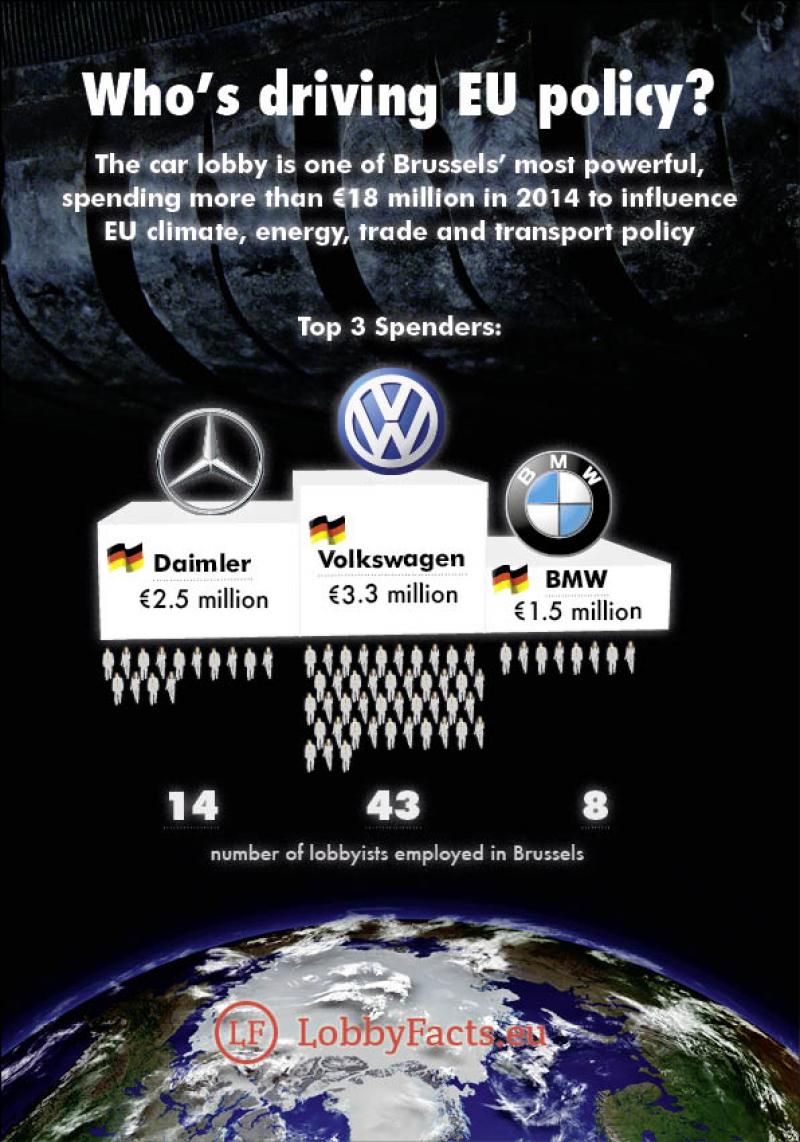 The car manufacturing industry is traditionally one of Brussels' strongest, and has a particularly German flavour. But the recent scandal engulfing Volkswagen (VW – who also make Audi) and potentially others shows that if Europe is serious about regulating the car industry and protecting public health and the climate, it needs to stand up to the car lobby rather than allowing those resisting regulation to write it.

In 2014, car manufacturers and their trade associations spent more than €18 million lobbying in Brussels. The website LobbyFacts.eu, based on the Commission's transparency register, shows that the top three industry spenders are well-known German manufacturers Volkswagen, BMW and Daimler. Volkswagen is by far the biggest spender, with almost €3.5 million spend in 2014, almost five times the spending of the biggest non-German manufacturer, Fiat-Chrysler (€700,000).

Boots on the ground – how many lobbyists

In terms of personnel, Volkswagen is also miles ahead of its competitors – Daimler has 14 staff lobbying in the Belgian capital while BMW has 8. VW has 43, almost double both combined. The highest non-German manufacturer is Honda, with 10 lobbyists.

The big German car manufacturers have also been increasing their lobby efforts over the years. A look at the historical data in the transparency register (soon to be publicly available on LobbyFacts.eu) shows that both spending and the number of lobbyists employed have massively increased since 2010. At the start of the decade VW declared only a quarter of its 2014 spending (€800,000), while 2013 spending still only reached just over half-way (€1,250,000). We can expect 2015 to be even higher – reputational management doesn't come cheap in the Brussels Bubble. Daimler has been declaring relatively stable lobby spendings (actually steadily decreasing by €300,000), while BMW, like VW, doubled its spending between 2013-2014, from €800,000 to €1.5m.

In terms of lobbyists, the increase in lobby power is astounding. last year, VW declared 4 lobbyists, against 43 today, almost an eleven fold increase. Daimler decreased from 10.8 registered lobbyists to 8.2, while BMW went from 3 to 8, according to data from the EU Transparency Register, archived by LobbyFacts.eu. This information was provided by the companies themselves, so there may be inconsistencies, but the figures indicate that the spending power of the car manufacturing industry in Brussels is on its way up.

In the shadows – trade association lobbying

Car manufacturers' trade associations are also important lobbyists in Brussels. The European-level association, ACEA (Association des Constructeurs Européens d'Automobiles), has 16 dedicated lobbyists and spent up to €2.5m last year on the activity. ACEA represents all the big brands currently engulfed in the emissions-cheating scandal – either as guilty (VW) or forced to claim their innocence (Daimler and BMW). Between it and its members, ACEA accounts for 80% of all car manufacturers lobby spending in Brussels and almost half of all the industry's lobbyists. Tellingly, the German car manufacturers' association, Verband der Automobilindustrie (VDA), has the same budget as ACEA (€2.5m) and almost double the number of lobbyists (31). But VW, BMW and Daimler are all also corporate members of BusinessEurope, one of the most influential lobby groups at the EU level, giving them extra lobby firepower.

What does all the money get you? A look at Commissioners' meetings during their first six months in office shows that the car industry met a Commissioner or a cabinet member over twenty times, with three quarters of these being German manufacturers or trade associations. Documents obtained by CEO show that many meetings have also happened below the Commissioner level, where there is unfortunately less transparency but more likelihood for lobbyists to get a result.

Writing regulations – money gets you influence

Car industry lobbyists are also very present in the Commission's advisory groups, formally known as expert groups, which have drafted important legislation. VW sits in five different groups, often with other manufacturers or trade associations. VW, Daimler and ACEA sit in the Working Group on Motor Vehicles, while all three are joined by BMW and VDA in the iMobility Forum. ACEA also sits on the Review of EU Air Policy Expert Group.

Getting MEPs on board – MEP-industry fora and amendments

Organising and participating in MEP-industry forums has also proven fruitful in the past, particularly the Forum for Automobile and Society (now called the Forum for Mobility and Society). Its membership includes the car industry, Commission staff and Parliamentarians, and CEO research revealed that some MEPs who were members tabled specific amendments to legislation based on car industry demands.

The European car industry has been successfully flexing its muscles for decades: back in the mid-90s it successfully lobbied against binding emissions targets, instead proposing a voluntary, industry-led scheme. The scheme failed – industry did not meet its voluntary target – but managed to delay binding targets for a decade. When binding targets were finally introduced, they were greatly watered down. Industry has since used membership of the influential expert group CARS21 to further delay emissions standards, while BMW even enlisted German Chancellor Angela Merkel to lobby on their behalf to further delay the introduction of standards. There have also been ongoing efforts to delay new testing procedures, although this scandal will surely move things along more quickly.

Fundamental problem in the Brussels Bubble?

But should we be surprised at this scandal? Warning signs have been there, with public research institutes, environment and consumer groups and the Commission's own in-house research body revealing that real world and test-condition emissions are hugely different. More recently it also emerged that the European Commission and the German government both knew of the 'defeat devices' fitted in cars to cheat under testing conditions – but failed to act. That it took US regulators to declare there was a problem is a serious blow to the EU and lays bare the consequences of bringing business to the regulating table. If we want policies in the interest of the climate and public health, then the same companies most likely to resist them should not be allowed to write them. This applies at all stages of legislation – from ensuring expert groups are independent to stopping MEP-industry fora; seeing which industry players are lobbying and how to which member-states are also trying to weaken legislation. But the independence needs to extend to the testing itself, to ensure that all testing centres are not industry-funded.

New rules are important in all of this, but the reality is that this scandal reflects a cultural problem within the Brussels Bubble that has seen regulators and industry in bed for decades. Until EU decision makers stop conflating the interests of big corporations with those of the public, profit will come before climate and public health.

The figures about the lobbyists you are presenting are wrong. The transparency register of the Commission covers for VDA 31 employees who are full time or part time dealing with European issues. They are not employed in Brussels and only some of them are lobbyists in the definition you have in mind in your article. If you use the transparency register to scandalise the automotive industry you should at least present the figures as they are described there. In the VDA Brussels office itself two people are employeed. Not 31 as you present wrongly. You made the same mistake also for the manufacturers you describe. I would suggest you correct your Information which you would like to give as a serious organisation.

We are going by what they
CEO

We are going by what they have written themselves at the time of publishing in the lobby register. So our figures are those they list themselves. The definition of lobbying is not made by us but by the lobby register. And if they want to change their entry, they can - the fault lies with them.