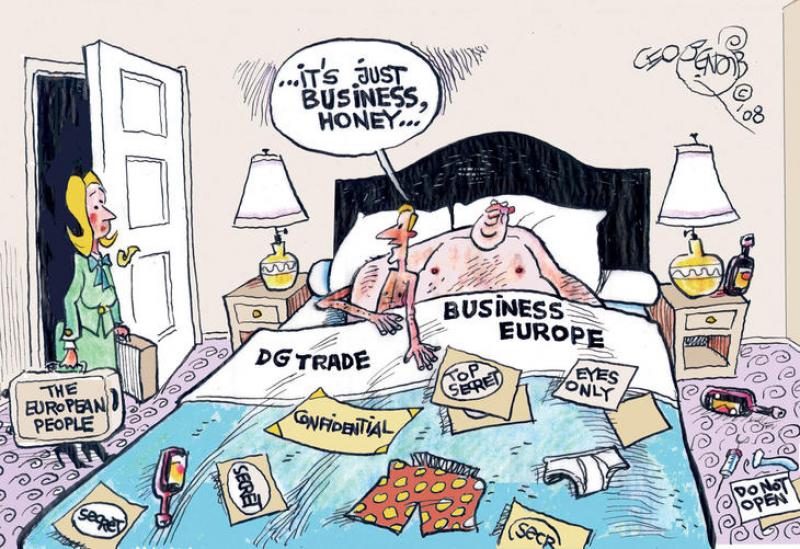 Tomorrow, on 3 December, BusinessEurope stages a seven hour big business lobby conclave in the European Commission headquarters: the Berlaymont building. In an invitation letter to EU Trade Commissioner Malmström, the event was announced as “an opportunity for CEOs from a selection of prominent multinational companies in all sectors of activity and top-level European decision makers to meet and exchange views on the challenges Europe is facing.”

Malmström declined the invitation, maybe because she has been publicly criticised over being too close to big business in the negotiations over the EU-US TTIP agreement. But no less than five EU commissioners apparently have less hesitation to attend the high-level lobby event.

The event is exclusively for CEOs of the 69 large multinationals (mainly cars, chemicals, energy, IT, oil, pharmaceutical and tobacco companies) that are member of BusinessEurope’s so-called Advisory and Support Group. The event is not announced on the BusinessEurope website. Invoking security reasons, BusinessEurope declined to share a list of participants for tomorrow’s meeting, commenting that “[a]s always we’ll communicate on this on our website after the event”. The event does feature in the Commission’s calendar for this week with Commission President Jean-Claude Juncker and commissioners Timmermans, Katainen, Oettinger and Moedas due to attend.

The early draft programme suggests that tomorrow’s meeting will kick off with a one hour exclusive with Commission President Juncker. Later on, the captains of industry will have 45 minutes with First Vice President Timmermans and in the evening Vice President Katainen will participate in a two hour “working dinner”. That the European Commission sees no problem in being invited to a big business lobby event inside its own headquarters is a clear and worrying sign that “Team Juncker” is very much like the Barroso Commission: in bed with big business!

Two years ago, in November 2013, a similar event took place. To get an impression of what such a meeting looks like, here’s some footage.2