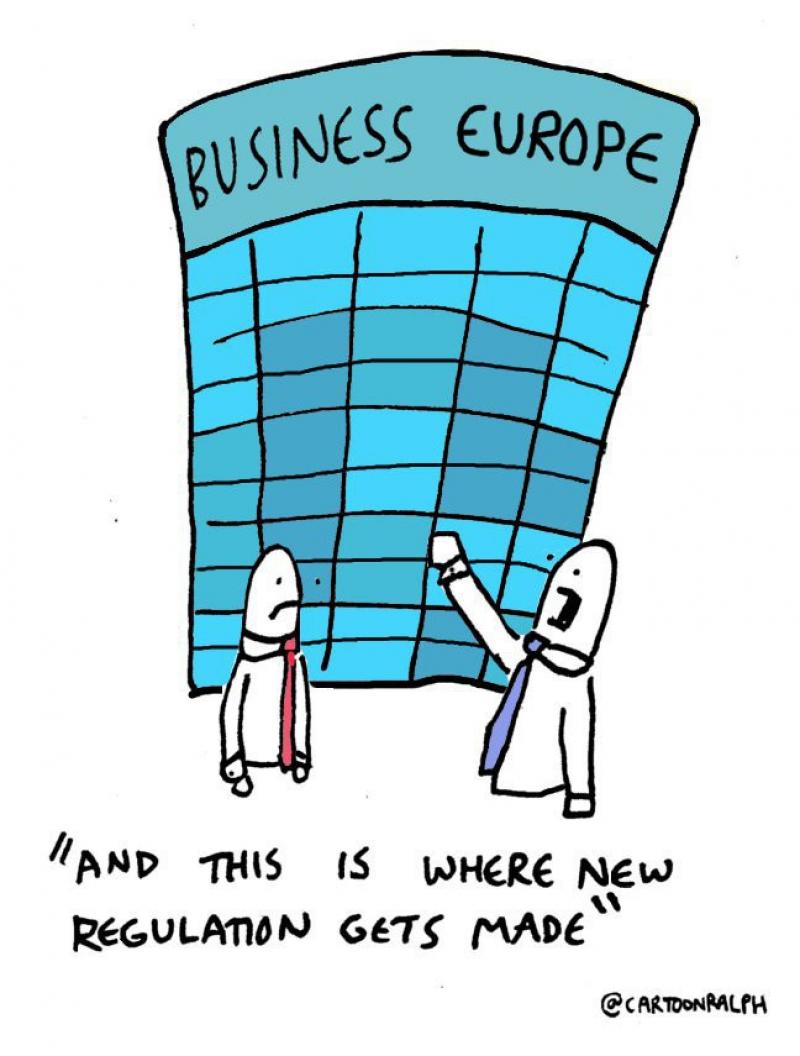 As BusinessEurope gets ready for its annual private parley with Commissioners today, Corporate Europe Observatory takes a look at Brussels’ most influential lobbyist (inspired by The Guardian’s Pass notes column).

Age: 59 or thereabouts. Ever since European countries started to collaborate closely after World War II, there has been a business body set-up to lobby them. The Union des Industries de la Communauté européenne (UNICE) started life in 1958 soon after the European Economic Community of six member states was created. In 2007 UNICE became BusinessEurope, a name which it says expresses “more clearly what it does and where it does it”.

So, what do they say they do? According to its website: “BusinessEurope is the leading advocate for growth and competitiveness at European level, standing up for companies across the continent and campaigning on the issues that most influence their performance. A recognised social partner, we speak for all-sized enterprises in 34 European countries whose national business federations are our direct members.”

And what do they actually do? BusinessEurope is one of Brussels’ most powerful lobbyists. It spends over four million euros every year to influence both the overall direction of the EU and its specific policies, on everything from the rules of trade deals that put corporations in the driving seat, to watering down concerted climate action.

Who’s behind it? BusinessEurope represents about 40 national business organisations (including the Confederation of British Industry, the Bundesverband der Deutschen Industrie, and the Mouvement des Entreprises de France) which are already big lobby players in their own right, as well as corporations such as Bayer, BMW, BP, ExxonMobil, Google, Microsoft, Pfizer, Shell, Total, and Volkswagen. When it comes to membership, it isn’t very fussy, with British American Tobacco, Japan Tobacco International, and Philip Morris all included. And while it claims to look out for the interests of small and medium businesses, the reality is that its policies are often driven by, and will benefit, its powerful members.

And when you say BusinessEurope is powerful...? It’s the most significant corporate lobby group in the EU and its policy papers routinely end up as sounding eerily similar to official EU positions. Working on its own, or with other corporate lobby groups, it has consistently lobbied for pro-big business policies.

Just look at the EU-US trade negotiations (TTIP), and the sister deal CETA with Canada, where the proposal on ‘regulatory cooperation’ (which is deeply controversial as it would put the business community at the table with regulators “to essentially co-write legislation”), was copy-pasted from BusinessEurope and its allies. 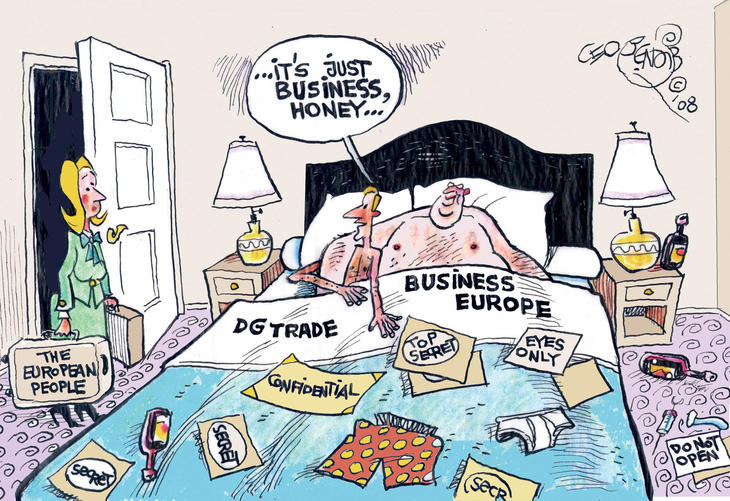 On climate action, BusinessEurope’s lobbying has ensured that targets on renewable energy and energy efficiency have been watered-down in favour of a focus on emissions trading. Alongside lobbyists from energy intensive industries, it has ensured that firms continue to receive as many subsidies, in the form of pollution permits, as possible.

That’s a lot of influence. And there’s more! On austerity, the EU’s post-crisis ‘economic governance’ reforms were developed in the aftermath of the 2007-08 crash and mirrored many of the proposals that BusinessEurope had been lobbying for.

And on deregulation, Commission advisers drew up plans whose tone, emphasis, and recommendations were an almost exact replica of big business demands, including those of BusinessEurope. Much of this has now been implemented as ‘Better Regulation’, aka corporate-friendly deregulation in disguise.

We could go on and on, but you’ve probably got the picture. As you can see, BusinessEurope not only provides some of the policies that are proposed by the Commission, but sometimes even the political vision that inspires them too. And we find that rather dangerous.

And what are they up to today? 21 November 2017 is BusinessEurope’s annual powwow with the Commission. Held every year (you can read about the events held in 2016 and 2015 but they follow a wearily familiar pattern), a number of Commissioners and BusinessEurope bigwigs meet for exchanges on strategy and the overall direction of the EU. This year’s agenda includes sessions with EU Commissioners Gabriel (responsible for EU digital economy policy), Moedas (research), Šefčovič (energy), Commissioner Oettinger (EU Budget), plus a working dinner with Katainen (competitiveness). In a signal of how warm the Commission feels towards BusinessEurope and its corporate backers, the event is hosted at the Commission’s HQ, the Berlaymont. It’s corporate capture in action!

Sounds cosy. Can I come too? No. Well, not unless you are a top executive at one of the world’s mega corporations, and have paid to “enjoy an important status within BusinessEurope” by becoming a member of its Corporate Advisory and Support Group (ASG). Perks of this group include “High-level contacts with the EU institutions (Commissioners, Cabinets, MEPs, Ministers)” and “Participation in four high-level meetings a year, with guests such as Commissioners, Presidents of EP political groups, Ministers”. Only ASG members can attend today’s event; the total annual EU lobby spend of the 26 corporations which hobnobbed with the Commission at last year’s event amounted to more than €31 million.

The Commission – which one’s that again? The European Commission is the EU’s executive arm. If the Council of the EU (representing the 28 member state governments) and the elected European Parliament get to decide on legislation, it is the Commission that drafts new laws, oversees implementation, and effectively sets the EU’s policy agenda. It’s a magnet for lobbyists and since December 2014, BusinessEurope has had over 170 lobby meetings with the elite in the Commission, namely Commissioners, their immediate staff, and top civil servants.

How do you know that? Because the Commission publishes lists of lobby meetings held by these people. It’s highly likely BusinessEurope has had hundreds of other lobby meetings with the lower echelons of the Commission, but these meetings are held in secret so it is impossible to know for sure. Current hot topics for BusinessEurope lobbyists include: EU industrial policy, digital policy and data protection, energy policy, trade, and others.

So BusinessEurope must have a lot of lobbyists? Yes, BusinessEurope alone declares 30 individual lobbyists, 22 of whom have passes to enable them to come and go as they like in the European Parliament. But more broadly in Brussels, there’s at least 25,000 lobbyists and it’s estimated that at least 70 per cent of them also work for business interests. 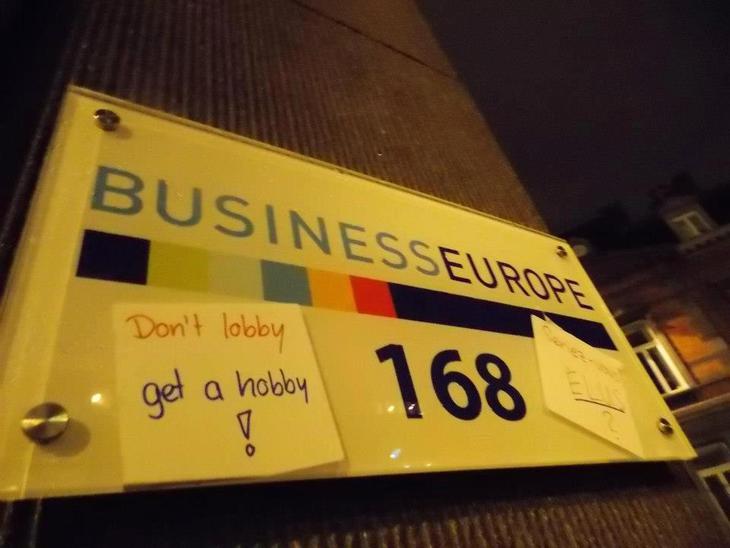 And this is bad because…? Well, how long have you got?

For starters, the head honcho of the Commission, Jean-Claude Juncker told his commissioners when they took office that they “should seek to ensure an appropriate balance and representativeness in the stakeholders they meet”. BusinessEurope’s annual shindig with the Commission clearly breaches that. Afterall, do you know of any equivalent events for civil society or trade unions?

But it is not just the privileged access that makes this problematic; it is also the influence on policy-making which comes with it. BusinessEurope acts in the interests of its members and its promotion of austerity and how-low-can-they-go regulatory standards impacts us all. The EU makes policy and laws which affect more than 510 million people across Europe and too often those policies are made in the interests of big business, not in the interests of citizens.

Do say: ‘Smile’ for today’s “networking cocktail and family photo” and ‘bon appetite’ to Commissioner Katainen at the working dinner. 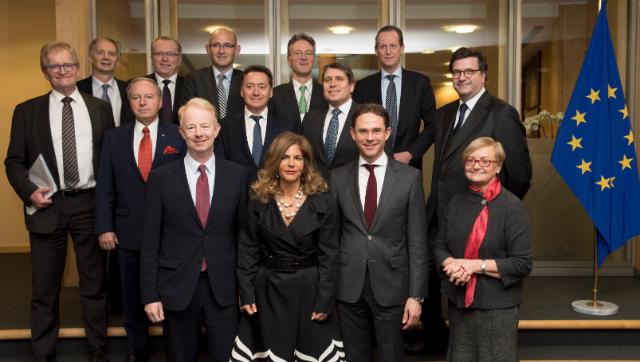