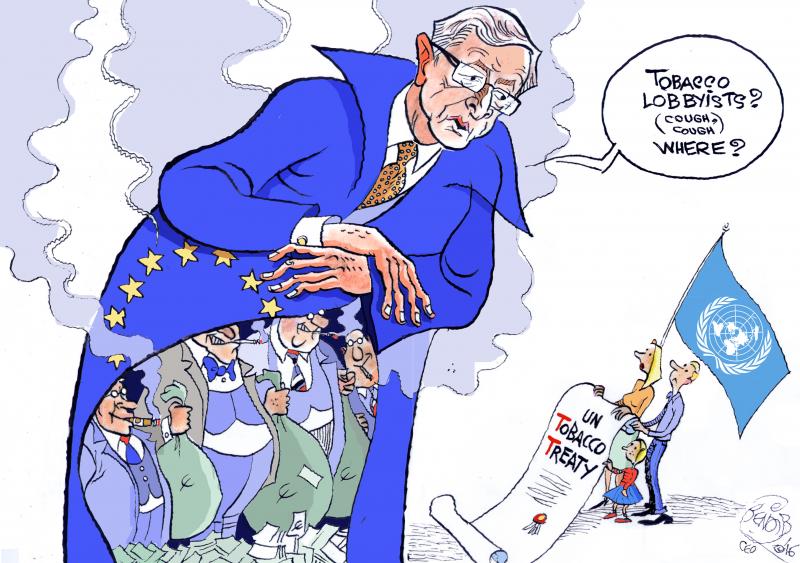 In February, European Commission President Juncker took many by surprise by flatly rejecting a European Ombudsman's ruling recommending full transparency around tobacco industry lobbying. The previous autumn (after an investigation sparked by a complaint by Corporate Europe Observatory), Ombudsman Emily O'Reilly had slammed the Commission's failure to comply with the World Health Organisation's Framework Convention on Tobacco Control as 'maladministration'. The ruling urged the Commission to publish details of all meetings with tobacco lobbyists online. Four months later Juncker responded by claiming that the Commission "complies in full" with the UN rules, repeating the unconvincing argument that its general rules in the field of transparency and ethics are sufficient.

In her speech "Combating tobacco industry tactics: State of play and a way forward" in the European Parliament a few weeks later, O'Reilly expressed strong regret “that the Commission declined to accept my recommendation to extend proactive tobacco lobbying transparency across all DGs and across all levels of the service.” “And, given the stated commitment of the EU to the Convention”, the Ombudsman added, “I confess to being puzzled as to why that is.” In the conclusions of her speech, O'Reilly offered at least a partial explanation, stating that “the sophistication of the tobacco industry's global lobbying efforts is still seriously underestimated”.

The Ombudsman, fortunately, has far from given up. Within a few weeks, she will publish a final ruling on the case. O'Reilly is also organising an official hearing in the European Parliament on “Improving transparency in tobacco lobbying”. Among the speakers will be Vytenis Andriukaitis, European Commissioner for Health. Andriukaitis has recently voiced strong disagreement with Juncker's rejection of the Ombudsman's recommendations. Last month, Andriukaitis revealed at a conference in the European Parliament that Juncker's response to the Ombudsman had not been discussed in the College for Commissioners. He reported that it was drafted by the Commission's Legal Services, signed by Juncker and sent to the Ombudsman without consulting other commissioners.

In a resolution approved in a plenary vote last month, the European Parliament added to the pressure on the Commission, stating its concerns about the Ombudsman's finding that the Commission was “not fully implementing UN WHO rules and guidelines governing transparency and tobacco lobbying”, adding that the Parliament “is of the opinion [...] that the Commission’s credibility and seriousness have been endangered”. The Parliament’s resolution “urges all the relevant EU institutions to implement Article 5(3) of the WHO Framework Convention on Tobacco Control (FCTC) in accordance with the recommendations contained in the guidelines thereto”.

In his response to the Ombudsman, Juncker argued that tobacco lobbying transparency is not needed because the number of meetings between top officials and tobacco lobbyists has decreased since decision-making on the Tobacco Products Directive came to an end in 2014. This is a clear example of the European Commission seriously underestimating the lobbying efforts of the tobacco industry. Tobacco lobbyists are now targeting other issues, such as EU trade policy (TTIP and other trade negotiations), the renewal of the controversial agreements with four tobacco giants on combating illicit trade in tobacco, and the battle around the choice of technology for high-tech digital watermarks in tobacco packaging to prevent counterfeiting. New documents uncovered by CEO - see box below - show the tobacco industry is also making full use of the Commission's flagship “Better Regulation” initiative in attempts to weaken tobacco control measures such as health warnings on cigarette packs. This has included attempts to bypass the health commissioner by lobbying the cabinet of Commission Vice-President Timmermans, who is responsible for ’Better Regulation’.

The European Parliament, the health commissioner and public health NGOs are calling on the Commission to accept the Ombudsman's recommendations. So what is Juncker waiting for?

If you wish to reuse the cartoon, please contact ceo[@]corporateeurope.org first.

The leading cause of preventable death, what if ISIS was killing nearly 700,000 Europeans a year? Would President Juncker demand that ISIS EU lobbying be protected from public view? I'm sorry but Europe has bigger problems if its leader fails to appreciate the magnitude of the problems facing it, that Big Tobacco is in a league of its own.