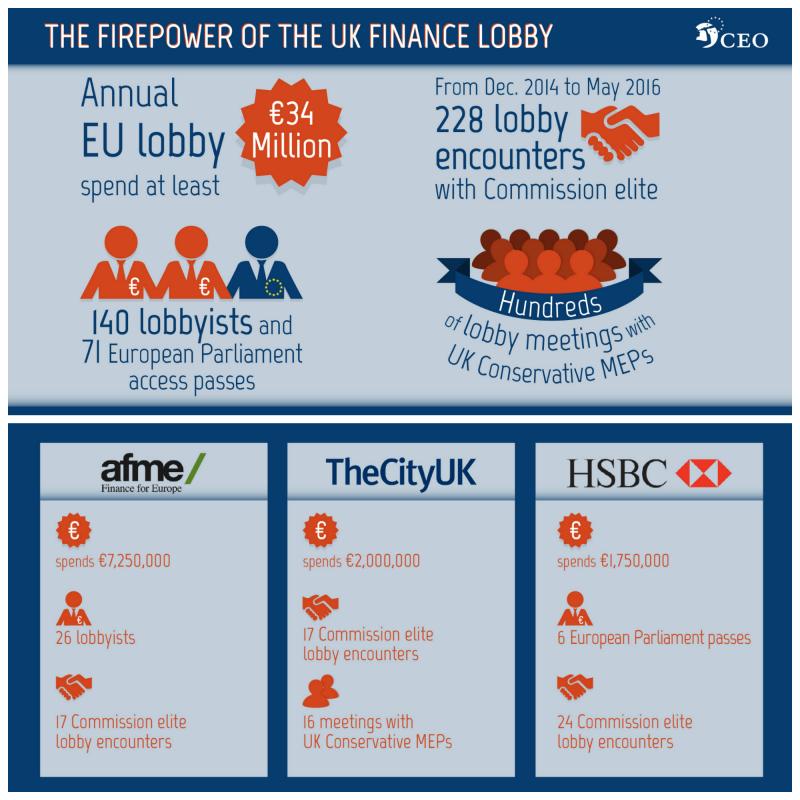 UK bankers spend over €34 million a year to influence EU

The UK financial sector spends at least €34 million per year on lobbying in Brussels and employs more than 140 lobbyists to influence EU policy-making, according to a study published today by Corporate Europe Observatory. [1]

“Lobbying for the City of London” shows that British banks, hedge funds, insurance companies and their lobby groups command massive resources and enjoy easy access to decision-makers in EU institutions. And collectively, the industry has emerged victorious from many lobbying battles in Brussels, with key victories on banking regulation, hedge fund regulation, and complicated financial products such as derivatives, often at the cost of regulation in the public interest.

From December 2014 to May 2016, UK financial sector lobbyists had 228 lobby encounters with elite European Commission officials. [2] On top of this, 71 representatives of ‘the City of London’ hold passes that offer access to the European Parliament enabling them to hold hundreds of lobby meetings with MEPs.

“The UK financial services lobby is very active in Brussels. It has the resources, the people and the access to ensure that its agenda is heard loud and clear, and this translates into serious political influence on the EU decision-making agenda. EU citizens must put pressure on politicians to disarm and defeat the lobby firepower of the financial sector.”

The research shows the top spender is the Association for Financial Markets in Europe which forks out over €7 million per year to lobby in Brussels. Meanwhile, TheCityUK spends at least €2 million, just ahead of HSBC. Other major lobbyists featured in the study include well-known names from the world of global finance such as Barclays, Bank of America Merrill Lynch, Goldman Sachs, Morgan Stanley, and Royal Bank of Scotland.[3]

The survey is based on several sources of lobby data [4] and analyses 50 of the biggest UK financial services actors. Actual lobbying spending is likely to be higher than reported because when organisations declared their lobby spend within a range, researchers took the lower figure. Also, key players who are not signed up to the EU’s (voluntary) lobby register could not be included as there is no data available on their lobbying activities.

Corporate Europe Observatory is not taking a position on the question posed in the UK referendum.