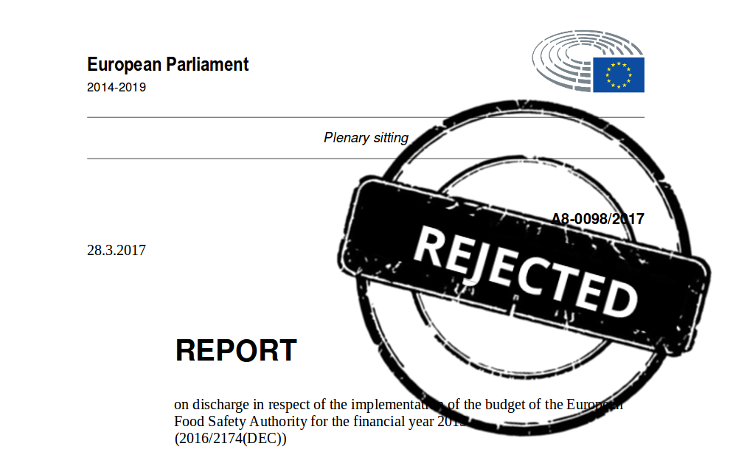 Top executives at the European Food Safety Authority (EFSA) have revealed their recommendations to reject demands for more independence from the food industry. Despite repeated calls from the European Parliament and civil society, they fear a closing of loopholes in the agency’s independence rules would be “too impactful”. By June 21, the EFSA Board will need to vote on a revised independence policy.

In a presentation published on the European Food Safety Authority’s website yesterday, the agency’s top executives reveal which recommendations they will give to the members of EFSA’s Management Board on the issue this week. Concerned that comprehensive conflict of interest regulation would be “too impactful”, they suggest the Board ignores and even rejects such calls from the European Parliament and civil society.

Four years in a row and in the context of several conflicts of interest scandals that have plagued the food safety agency’s credibility, the European Parliament has urged EFSA to incorporate a two-year cooling-off period into its new independence policy. MEPs want to see covered all the material interests of EFSA’s external experts that relate to the companies whose products are assessed by the authority and to any organisation funded by them.

EFSA’s current cooling-off period only applies to the products discussed in the specific panel a given expert is applying to join. With industry lobbying being much broader than this, the existing regulation neglects to cover many other areas likely to become subject to conflicts of interest, such as risk assessment methodologies used across different products.

Aside from the European Parliament’s repeated calls for stricter conflicts of interest rules, EFSA also received over 200 comments from MEPs, academics, NGOs and EU citizens as part of a public consultation on its draft independence policy. Nearly all non-industry participants in the consultation have asked the agency to broaden the scope of its conflicts of interest assessment to its entire remit and all its external experts. As this week’s presentation shows, they failed to convince EFSA’s management to change their position.

Among the other European Parliament and civil society demands ignored by the group of top EFSA executives are:

“The response from EFSA’s top executives is sadly unsurprising. Despite years of criticism from the European Parliament, from civil society and the media, they will not budge and seem to insist on working with industry-funded experts.

“At this stage, only a last-minute intervention by members of the Management Board can save EFSA’s independence policy from the apparent stubornness and lack of responsibility of the agency’s directors.”

Note to the editors