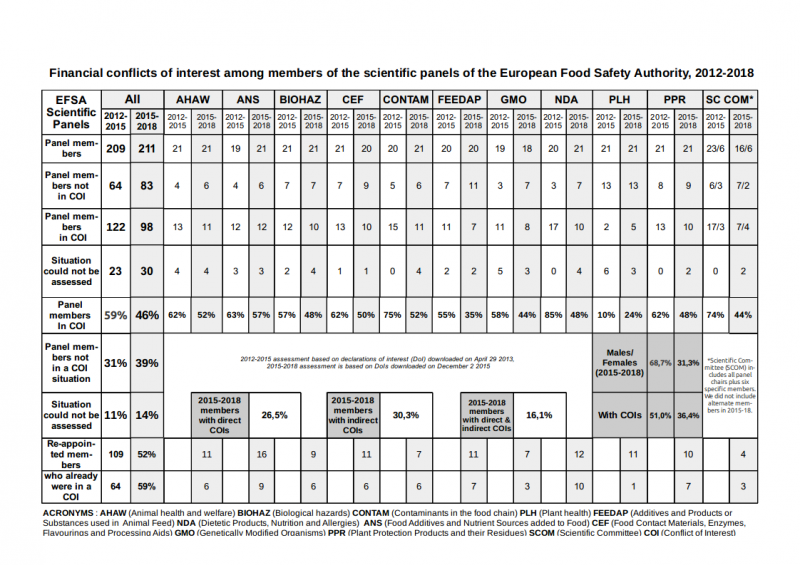 Nearly half (46%) of all experts sitting on the scientific panels of the European Food Safety Authority (EFSA) still are in a direct and/ or indirect financial conflict of interest situation with the agribusiness and food industries, Corporate Europe Observatory's new report “Recruitment Errors” shows. EFSA's Management Board is to adopt new independence rules on 21 June 2017, but the draft policy is not sufficient despite repeated criticism from the European Parliament. The report concludes with recommendations for improvements.

This investigation is a follow-up to CEO’s 2013 in-depth report, “Unhappy Meal – the European Food Safety Authority’s Independence Problem”. The comparison between the findings of the two reports yields interesting insights, in particular:

- While 46% of experts with financial conflicts of interests (COIs) is not an acceptable situation where the norm should be zero, there have been some improvements since the proportion of experts with COIs among the previous panels was higher, at 59%. However, since the loopholes in EFSA’s independence policy that are the root cause of the problem have not yet been closed, the improvement could simply be temporary.

- Many scientists with financial conflicts of interests in 2013 were re-appointed in 2015 by EFSA, including in senior positions (chair, vice-chair, scientific committee). Among current members of EFSA’s panels, 52% are re-appointments but strikingly, the proportion of experts with COIs among these is almost exactly the same as the general proportion of experts with COIs in the 2012-2015 panels (59%). Independence doesn’t seem to have been a criteria when deciding whether to re-appoint former experts, although many concerns had been raised by NGOs, Members of the European Parliament and the media.

EFSA's Management Board will adopt a new independence policy next June 21st. This could be an opportunity to put an end to this persistent problem. However, the draft new independence policy was heavily criticised by the European Parliament and NGOs because, beyond small improvements, it perpetuates the existing policy’s main problems and loopholes (a too narrow assessment scope for experts' interests, and an exclusion of research funding whereas this is the largest source of direct financial COIs). It is to be feared that the agency will not take this criticism into account.

Martin Pigeon, researcher and campaigner on agribusiness issues at Corporate Europe Observatory and author of the report, said:

"Almost half of EFSA experts still have financial conflicts of interests while the norm should be zero. The increase in the recruitment of independent experts is welcome, but without an independence policy that confirms the trend this development may only be temporary. After four years of repeated criticism from the European Parliament, why does EFSA’s management keep refusing to close the loopholes in their independence policy ?

The purpose of this policy is to protect the agency from the food industry’s undue influence. To build public trust, EFSA's Management Board and the European Commission must lead on the new drafting process, and adopt a meaningful independence policy for EFSA."

Note to the editors

EFSA evaluates the toxicity of all regulated products in the EU food market, such as food additives, pesticides, GM crops or food packaging materials. It also produces nutrition recommendations and evaluates food labelling health claims. Getting EFSA to say the ‘right’ thing in its scientific opinions is therefore very important for regulated industries.

- The report “Recruitment Errors” can be read on CEO’s website: https://corporateeurope.org/sites/default/files/attachments/recruitment_...
All the report’s raw data, with the detailed assessment for each interest, is available on request.

- We published a non-exhaustive chronology of COIs scandals having affected EFSA since 2010, see https://corporateeurope.org/food-and-agriculture/efsa/chronology

- EFSA has usually answered to our criticism with two main arguments, which we reject:

- in their opinion, an strict independence policy such as the one we argue for would compromise excellence, whereas we consider that excellence is impossible for a public food safety agency without independence from the food industry.

- EFSA keeps referring to the necessity to keep working with all scientific institutions, even when these are significantly funded by industry and actively looking to develop this source of funding. By doing this, we consider that EFSA fails to understand that it is not any scientific organisation (for which openness would be a virtue) but a public administration whose duty is to give the benefit of the doubt to public health and the environment, not industry.

EFSA needs to understand that when it gets offered competent expertise for free by industry-funded organisations, there might be a reason other than generosity.

Of course, the fact that certain EFSA executives are coming from industry lobby groups might contribute to a certain reluctance in acknowledging such facts.