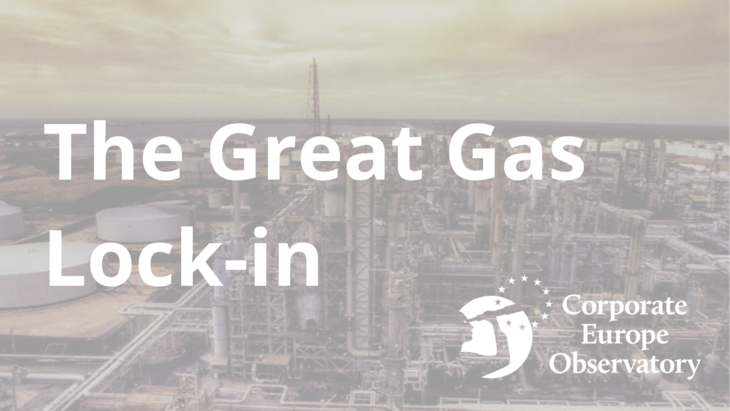 A new Corporate Europe Observatory report reveals that in 2016 alone the gas industry invested over €100m in lobbying EU decision makers. These lobby efforts threaten to lock the European Union into another 40 – 50 years of climate-damaging fossil fuel dependency. Behind industry’s promotion of gas as a ‘clean fuel’ is little but hot air and clearly vested interests.

Published just ahead of this year’s UN Climate Change Conference in Bonn, “The Great Gas Lock-In” is also a timely eye-opener as the EU’s revises its cross-border energy plans,also referred to as its list of ‘Projects of Common Interest”.

The report reveals the staggering amount of gas industry spending on the influencing of EU policy-makers last year. Having invested over €100m in lobbying, gas corporations and their interest groups were able to hire more than one thousand lobbyists as well as an army of public relations and lobby consultancies to promote gas as a clean bridge fuel in the transition to renewables.

Among the ten biggest spenders are some of the world’s most polluting companies, such as ExxonMobil and Shell, each with €4.75 million lobby expenses over the one-year period. With such substantial resources, industry actors secured more than 460 high-level meetings with the European Union’s climate and energy bosses in the last three years, Commissioner Cañete and Vice-President for Energy Union Sefcovic.

“The Great Gas Lock-In” traces how these corporate lobbying efforts have led the European Commission and EU member state governments to promote the construction of highly controversial new gas infrastructure projects, including the Euro-Caspian Mega-Pipeline from Azerbaijan, pushed for by companies such as BP and Fluxys, and the Franco-Spanish MidCat pipeline, promoted by Spanish gas company Enagás with the aid of Commissioner Cañete.

The gas industry far outguns public interest groups lobbying against new infrastructure, who mobilised a mere three per cent of industry's spending on advocacy work, had one-tenth the number of lobbyists available and secured just one-ninth of the meetings with the EU Commission’s top climate and energy officials.

“As a result of intense industry lobbying, the EU Commission has swallowed the gas lobby’s false claim that their fuel is a ‘clean’ complement to renewables, and is now planning a new generation of pipelines and other gas infrastructure on this basis.

“With these projects the EU will break its own commitments under the Paris agreement and lock in place another 40 – 50 years of climate-damaging fossil fuel dependency. If the EU is serious about acting on climate change, it needs to keep the gas industry as far away from the policy process as possible, at the UN talks, in Brussels and in national capitals.”