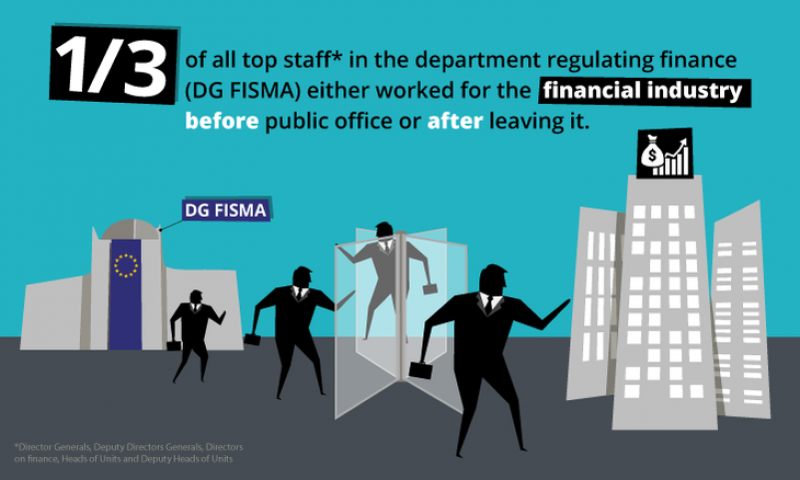 Ten years after the start of the financial crisis, the revolving door continues to swing both ways at the European Commission directorate responsible for financial regulation, new research reveals.

A new study co-authored by political scientist Yiorgos Vassalos and Corporate Europe Observatory shows that a third of the people who occupied top positions at the European Commission’s Directorate-General for Financial Stability, Financial Services and Capital Markets Union (DG FISMA) between 2008-2017 either came from the financial industry or went on to work there after leaving the Commission.

The research also found that:

Weeks after the European Ombudsman issued a scathing critique of the Commission’s handling of revolving door cases of ex-commissioners like that of former Commission President Barroso, this research further highlights the bias in yet another EU department’s working culture, which could benefit the financial industry actors it is meant to regulate.

“The revolving-door culture at DG FISMA means many of the department’s top officials may not have the necessary distance from and neutrality towards the entities they are supposed to regulate.

“When promoting public-interest regulation could impinge on personal career prospects in the sector, the risk of undue sympathy for the industry’s vested interests is high. At the same time, DG FISMA’s frequent recruitment of staff from banking industry actors may well contribute to a pro-corporate bias at the EU department.”

“ The Commission rules for mitigating potential conflicts of interest have failed to stem the tide of recent revolving-door cases and must urgently be strengthened. Despite the devil-may-care moves of ex-commissioners and even ex-presidents of the Commission into industry jobs, the Commission still refuses to recognise its revolving-door problem as a systemic cultural issue.”

“The notion that a move from a regulatory body into the regulated industry is a perfectly logical career progression must be shattered once and for all.”