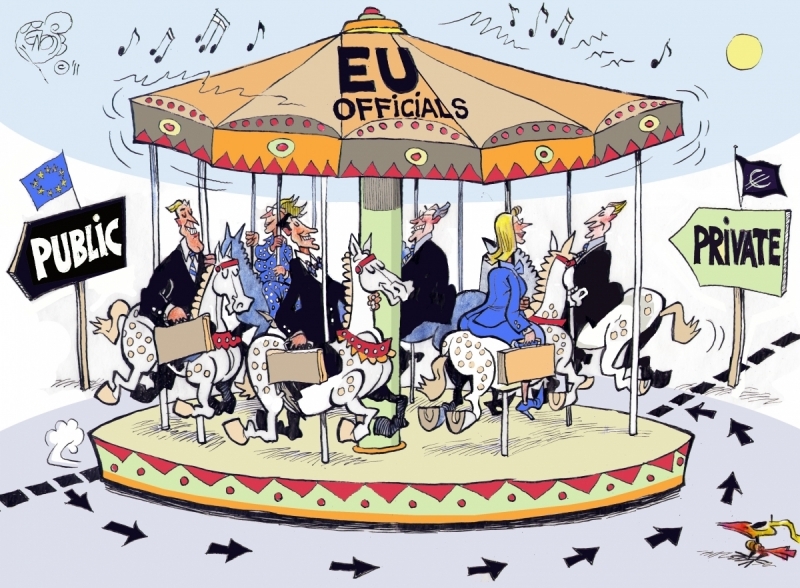 More than one and half years after the Commission made its proposal for new Staff Regulations – the rules that govern all EU institution staff – the European Parliament has this week adopted the new regulation. Corporate Europe Observatory welcomes the steps in the right direction, to help curb conflicts of interest that arise through revolving door between public officials and corporate lobbyists. These include a cooling-off period on certain lobby jobs for senior officials, as well as transparency around these cases. But ending the privileged access and undue influence that the revolving door gives to big business and their lobby groups will require more. Not only are stronger rules needed in future, but giant leaps are needed right now to ensure proper implementation of the revolving door rules in the new Staff Regulations.

On 2 July 2013, more than one year after the European Parliament's responsible committee, the Legal Affairs (JURI) committee, reached its own compromise text, the European Parliament adopted the EU's new Staff Regulations. The Strasbourg plenary session passed the resolution on Tuesday, 522 for, 150 against, with 39 abstentions. CEO, as part of the Alliance for Lobbying Transparency and Ethics Regulation (ALTER-EU)'s Block the revolving door! campaign, has for several years worked to expose the harmful impacts of unmitigated conflicts of interest that arise through the revolving door. We have also campaigned for stronger rules, as well as better implementation of the rules, to ensure that public interest policy-making can triumph over the privileged access and undue influence that the revolving door offers corporate lobbies. The adoption of the new staff regulations this week marks a significant campaign milestone, and we are pleased to see some concrete improvements in the revolving door rules. You can compare the old revolving door rules (Articles 11 and 16) with the new ones here.

Whilst the old staff regulations contained some general language about dealing with conflicts of interest of staff (Article 11a), the new rules lay out a concrete procedure for properly screening new staff for actual or potential conflicts of interest. The new Article 11 requires candidates applying for a position to fill out a specific form, listing any actual or potential conflict of interest that they might have, vis-a-vis the position they are applying for. The appointing authority of the institution must then examine if this could impair the independence of the candidate and issue a duly reasoned opinion. This is good news in several ways. Firstly, it sets in stone a procedure that must be followed by the institutions, and secondly, it will create a 'paper trail' that watchdog groups like CEO can use (via access to documents requests) to check if the appointing authority is taking the procedure seriously, and to ensure that risks of conflict of interest don't go unnoticed or unmanaged.

We also see some success for the block the revolving door campaign in the new rules governing post-employment for EU institution staff. Article 16 of the old staff regulations included a two-year notification period after staff leave their EU job, in which they must inform their former institution of new jobs (paid or not) that they plan to start, so they can be assessed for “risk of conflict with legitimate interests of the institution”. Their new occupation can then either be permitted in full, permitted with certain restrictions (for example, on contacting former colleagues, working on dossiers previously responsible for, or for clients they previously had contact with) or in extreme cases, forbidden (for the duration of that two year period).

The newly adopted staff regulations retain these provisions, but Article 16 now also includes a one year cooling-off period for senior officials, which bans them from lobbying their former institution “for their business, clients or employers on matters for which they were responsible during the last three years in the service.” Moreover, all EU institutions will be required – in accordance with data protection laws – to annually publish information on the implementation of this new rule, including a list of cases assessed.

This is certainly an improvement on the old rules, which did not include any kind of cooling-off period. It is also a promising precedent for transparency, requiring details of the revolving door cases of senior officials to be published annually.

CEO not only welcomes these improvements, but we also take note that by including these stronger provisions on revolving door type conflicts of interest, the European Parliament (who pushed for their inclusion) has sent a clear message to the European Commission. The Commission has consistently presented the view that there is nothing wrong with the revolving door rules (despite plenty of evidence to the contrary, and an ongoing investigation into their systemic failure to implement these rules, by the European Ombudsman) and that no improvements were necessary. The final result of the long negotiations around the staff regulations shows that the European Parliament – and even the Council of member states – disagree.

But alas, we have not yet finished spinning the (tale of the) revolving door. For whilst we welcome the steps taken in the right direction, the rules in the new Staff Regulation do not yet go far enough to stop the revolving door's contribution to the corporate capture of EU policy-making. The language around the 12 month cooling-off period for senior officials is very narrow and contains several loopholes. Senior officials refer only to Directors-General (or their equivalent in grade AD 16 or AD 15) and Directors (or their equivalent in grade AD 15 or AD 14). It only bans lobbying former institutions on the matters that they were responsible for in last 3 years. And it contains the worrying phrase “the appointing authority shall, in principle, prohibit”.

There also remains a loophole for contract staff, who according to the new staff regulations, can be employed for up to six years (para. 19). In such cases, there is a clear need for (appropriate and proportional) revolving door rules. The regulation does refer to the need, due to the high number of temporary staff within agencies (combined with the need to define a consistent staff policy) to “create a new category of temporary staff and to lay down specific rules for this category” (para. 24). This could open up a process in which it is possible to include appropriate revolving door type conflicts of interest rules for contract staff.

Whilst our work to block the revolving door continues through, for example, the European Ombudsman's ongoing investigation into the Commission for its systemic failure to properly implement its revolving door rules, the rules governing EU staff are not likely to be reopened for another decade or so. But aside from the continued and urgent need for better implementation of the rules, there is still room for future improvement in their content. As we noted in our blog two weeks ago, despite these first steps in the right direction, there is still more to be done to counteract the harm that the revolving door does to public interest policy-making. In particular, ALTER-EU believes that blocking the revolving door, and stopping the detrimental impacts that unmitigated conflicts of interest can have on public-interest decision making, requires:

In the attached document to this article

you compare two versions of the regulations for the European Commission.

Where can I find the originals of these regulations, especially the 2013 one?