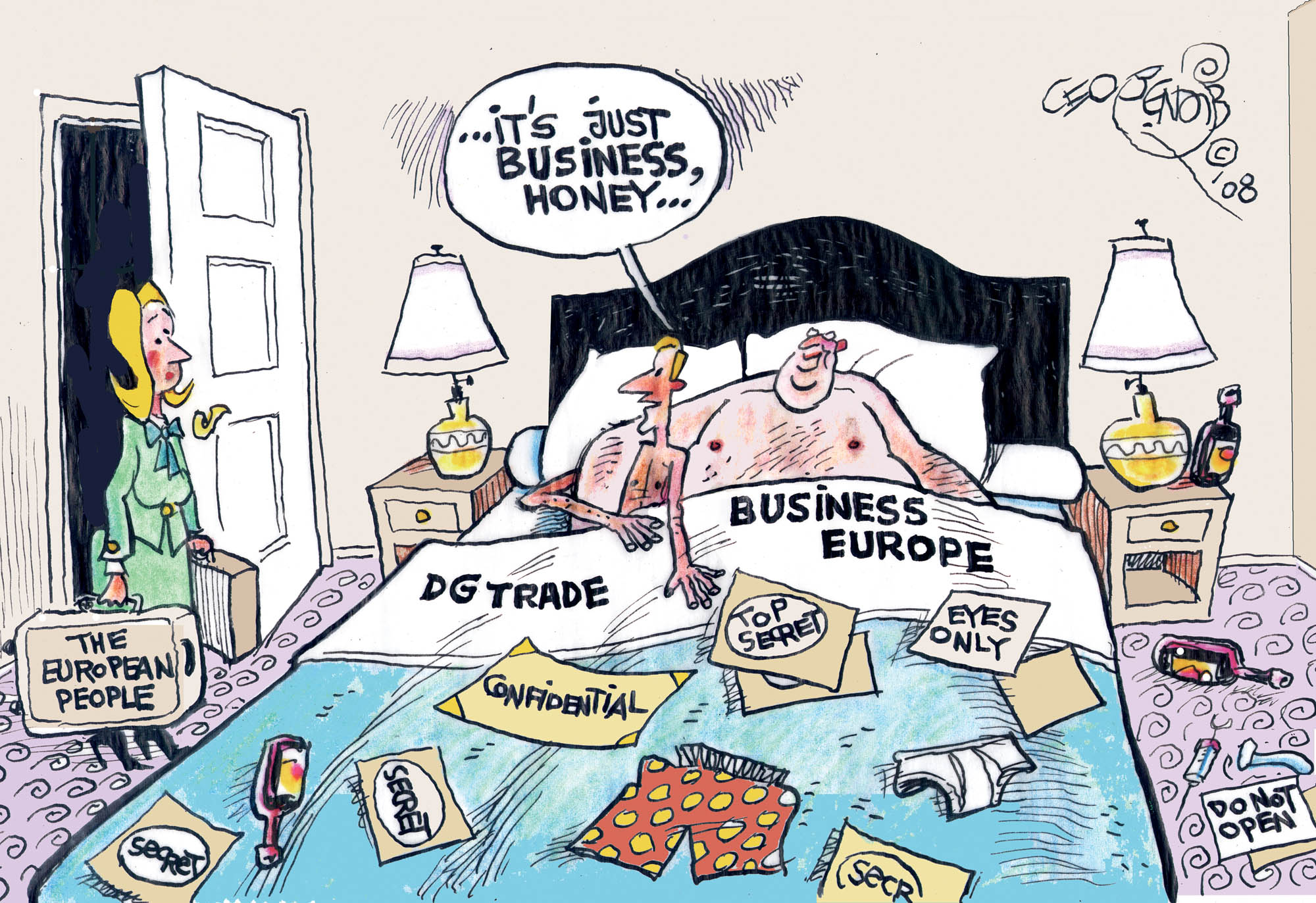 In an oral hearing at the EU's General Court in Luxembourg on Friday, 11 January 2013, the EU Commission defended its practice of sharing sensitive information with big business lobby groups while withholding the same information from the general public. The hearing took place in the context of Corporate Europe’s Observatory’s lawsuit, suing the EU Commission for withholding information related to the EU’s free trade talks with India. The Commission is accused of discriminating in favour of corporate lobby groups and of violating the EU’s transparency rules.

The lawsuit concerns 17 documents related to the ongoing EU-India free trade negotiations. The Commission shared all of these documents in full with corporate lobby groups such as BusinessEurope. But Corporate Europe Observatory (CEO) only received censored versions, with allegedly sensitive information about priorities, tactics and strategies in the negotiations deleted. The Commission had argued that the public disclosure of these documents would negatively affect relations with India.

The hearing started with the oral pleadings of both parties, followed by a number of questions from reporting judge Maria Martins Ribeiro addressed to both parties. The large majority of questions were directed towards the Commission. Germany, which had intervened in the case in writing to support the Commission, was not present at the hearing.

Commission: “We have done everything correctly”

According to its lawyer, the Commission had done everything correctly. It had carefully assessed all documents requested by CEO via the EU’s access to information legislation. It was “fully justified” to censor them as their public disclosure would undermine the EU’s relations with India and in particular the ongoing negotiations for an EU-India free trade agreement (FTA). The lawyer claimed images of protests against the FTA and a call to halt the talks signed by more than one hundred civil society groups showed how real that danger was. The business lobbyists who had originally received the documents, on the other hand, had been of a limited number and not “the people overall”. According to the Commission, they would have known to treat the documents confidentially.

CEO’s lawyer would not be drawn on the nature of the deleted passages. He argued that the documents were initially distributed to a potentially large number of business lobbyists and that there was an enormous potential for the information to have been passed on to others. Withholding the same information from CEO appeared to be an instance of discrimination.

Take for example one of the contested documents, a letter from the former Trade Commissioner Peter Mandelson to BusinessEurope’s then Director General Philippe de Buck from March 2008. In this letter, Mandelson commented on the EU and Indian negotiating positions. However, these comments were deleted from the version that was released to CEO. BusinessEurope’s Philippe de Buck had clearly received it without deletions. In a handwritten note at the bottom of the letter, Mandelson even encouraged him: “You might make some comments to your counterparts in the CII in view of the above”. CII is the Confederation of Indian Industries, which represents over 90,000 Indian companies.

Lost in linguistics: the meaning of Mandelson’s handwritten note

Asked by the Court how it interpreted Mandelson’s handwritten note, and whether it was meant to encourage the letter was to be spread further, the Commission’s lawyer, a Greek, was on shaky grounds: “Well if you write this to a Greek, they will put the letter online”. But the lawyer claimed that Mandelson, an Englishman, had clearly not meant to encourage de Buck to share the letter. Notably, Mandelson had suggested to de Buck that he “might” discuss the content of the letter with his Indian counterparts, instead of using the allegedly more explicit “may” or “should”. An English lesson, Commission style.

Another document obtained by CEO contradicts the Commission’s claim that recipients of its documents would treat them as confidential by default, and therefore not share them widely. The document in question was released to CEO in the same access to information request, but only with redactions. This document, which the Commission claims contains sensitive information that its recipients would have treated with care, was put online by one of them, the Czech government. According to CEO’s lawyer, this showed the enormous potential for the other documents to have also been passed on. In any case, the Commission “was running a big risk” when it shared allegedly sensitive information with large trade associations, which according to their mandate have to pass on and discuss information with their members.

Commission infringing on its own rules?

The Commission even seems to be violating its own internal rules as laid down in its Vademecum on access to documents. The October 2010 version states that if “information contained in a document has already been transmitted to a large number of people (...) a refusal to disclose it would not be justified, even if the document were initially intended for internal use”. According to CEO’s lawyer that was exactly the situation for the documents at the heart of the case.

The court hearing took place as the EU and India are speeding up negotiations on a far-reaching free trade agreement, which they want to conclude by April/May 2013. The talks, which started in 2007, have been shrouded in secrecy, with no text or position as yet disclosed to the public. However, there are major concerns prompted by what scant information has emerged that the EU-India FTA will in fact fuel poverty, inequality and environmental destruction. There are also fears that the EU Commission and the Indian government have effectively handed responsibility for the negotiating agenda over to big business.

What is at stake in this lawsuit is whether the Commission can continue its habit of granting big business privileged access to its trade policy-making process by sharing sensitive information, while at the same time withholding the same information from the public. This practice not only hampers well-informed and meaningful public participation in EU trade policy-making, it also leads to a trade policy that, while catering for the needs of big business, is harmful to people and the environment in the EU and across the world.

A ruling is expected for spring or summer.