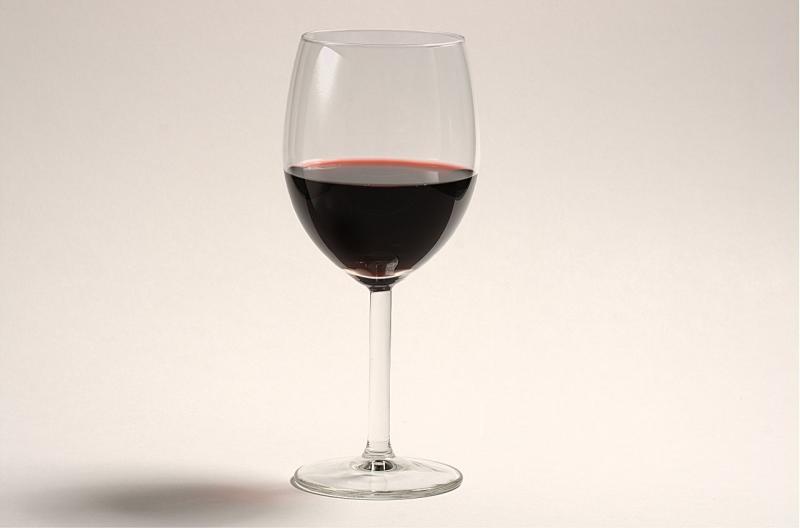 Chemical giant's lobbyists woo MEPs via online wine tasting, just as the battle over pesticides reduction proposed by the European Green Deal heats up. But does this event comply with European Parliament rules on lobbying gifts and events? Don't miss the updates since publication at the bottom of the article.

COVID safety rules in Brussels are ruining everyone’s social life, but also make things harder for corporate lobbyists: part of their job is to seduce decision-makers, and videoconferencing only allows for so much pheromones and body language to get through. In our pandemic times, these professional pleasers can no longer rely on the tried and tested method of wining and dining their targets to make them pay attention to their bosses’ interests. But necessity is the mother of invention, and the lobbyists defending chemical giant BASF’s pesticides business have invited MEPs to an online wine tasting session, served with a side of lobbying!

The invitation email (reproduced below) invites MEPs to participate in a “virtual wine tasting on February 22, at 19h00, together with other members of the EU Parliament and a few BASF colleagues”. However, the lobbyists toasting the MEPs' health may well come at the expense of the health of the rest of us, not to mention of nature.

Why now? Well, aspects of the European Green Deal pose an existential threat to the biggest chemicals company in the world. The Farm to Fork and Biodiversity Strategies, in particular, propose a 50 per cent reduction in pesticides used in the EU, to give biodiversity a chance to keep sustaining human life on Earth (we humans rely on healthy natural ecosystems for vital functions like breathing, eating and digesting).

This is a problem for a company which sold almost €8 billion in 'Agricultural Solutions' in 2019 –81 per cent pesticides and seed treatments, the rest seeds. That’s the thing with corporations: they don’t need to breathe, or digest. BASF might still employ more than 70,000 persons in Europe (they cut 5% of their global workforce in 2019) but the company, like all commercial corporations, is just a legal fiction designed to maximise value extraction for its shareholders (including through tax avoidance) while shielding them as much as possible from the responsibilities of what it is doing on their behalf. 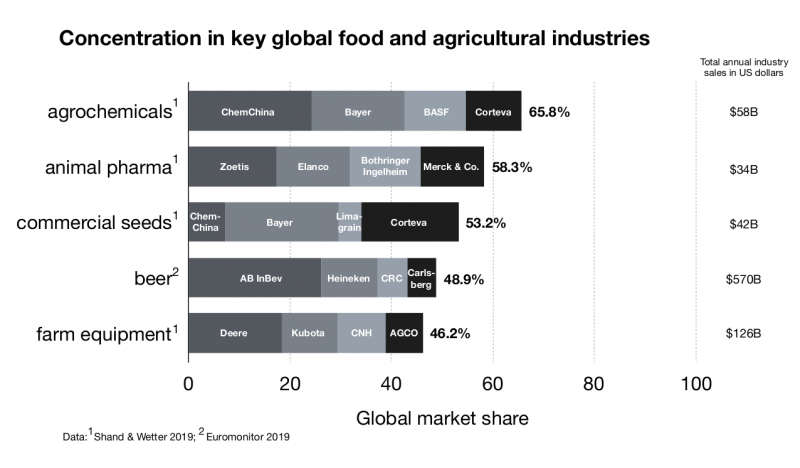 So, like the other pesticides manufacturers (the market is increasingly dominated by fewer and fewer companies, see image above), BASF is asking for – and might well obtain – an impact assessment of the Green Deal’s pesticides reduction objectives: a big fat layer of bureaucracy to delay the realisation of these ambitions and give corporate lobbyists more opportunities to hollow them out.  SidenoteBASF asks for nothing less than an analysis of “trade-offs resulting from proposed policy measures, including ex-ante and ex-post impact assessment of agricultural sustainability, productivity, food security and profitability”. But they do not ask for an assessment of what the measure would achieve in terms of biodiversity protection... Impact Assessments are more and more widespread in EU law-making as a result of the European Commission having adopted the so-called “Better Regulation” initiative, inspired by big business and tobacco lobby groups.MEPs are currently discussing an own initiative report on the strategy, and despite the fact that this report is not meant to become binding legislation the lobbying is fierce already, with 2,297 amendments tabled!

Of course, BASF lobbyists hide their aim – to protect their employer’s profits – behind noble sentiments. BASF says they just want to “optimize agricultural production, increase farm profitability and improve the quality of life for a growing world population”. Their “we feed the world” narrative is of course at odds with the mono-cropping farming model they sell, which actually destroys farming jobs, biodiversity, and soil fertility. This has long been a strategy of the pesticides industry: to hijack the genuine professional pride of farmers, and claim to be the ones concerned with feeding us.

But arguments alone do not achieve much without a good delivery.

An “online” wine tasting? The idea is simple: BASF lobbyists send interested MEPs a “wine tasting kit”, a carton of “six small bottles” to “celebrate Portugal’s unique wines” (Portugal currently holds the EU’s rotating Presidency) during these “challenging times”. Then the attendees connect on a videoconferencing platform on Monday 22 February at 7pm, and BASF’s in-house chief sommelier will guide participants through the selection of white, red, and Porto wines kindly offered by the chemicals corporation (which holds more than a million bottles from all over the world in its Ludwigshafen headquarters).

The email also mentions, almost in passing, that “there will also be possibilities to discuss how the Farm to Fork Strategy could bring new opportunities & challenges for wine producers and farmers”.

This might well be the most important part of the email, though. Conventional wine producers still spray huge amounts of very toxic pesticides on their grapes to fight fungi and pests (even though the market for organic wine, produced using much less toxic pesticides, SidenoteThe main pesticide used in organic wine production is copper sulfate, fungicide, which is problematic as it accumulates in soils and is poisonous to many organisms – that said the biggest users of copper sulfate by far are conventional wine-makers. Recent tests on pesticides residues in wine show that organic wines contain far less pesticides residues, when any. is growing particularly fast in Europe). While viticulture represents 3 per cent of France’s agricultural land, for instance, French wine-makers spread 14 per cent of the country’s pesticides. And MEPs surely wouldn’t want to risk the delicious wine they just tasted, or the livelihoods of the people who made it?

Portugal's Environment Agency has warned that pesticides, including substances forbidden in the country, are used in such concentrations that they are contaminating groundwater reserves critical for the country’s water supply during summer months. There are no EU legal limits SidenoteMaximum Residue Levels are set at the EU level for raw products, in this case for wine grapes, and then member states apply if they want a processing factor to calculate the MRL for processed food, such as wine. Processing factors are detailed by member states in their National Summary reports: several use a factor 1 between grapes and wine. Portugal did not report any processing factor for wine in its latest report. to pesticides residues in wine (or other processed products): a 2008 analysis by PAN Europe found that “judged against EU standards on drinking water, none of the conventional wines would have been approved for human consumption. On average, pesticides were present at levels 230 times higher than legally permitted in drinking water”.

It would be interesting to see whether BASF’s selection contains any organic wine – of little commercial interest to the company – and to examine the levels of pesticides residues in the wines offered to MEPs. Recent tests found residues of very toxic pesticides even in prestigious bottles – though the worst consequences from pesticide exposure from conventional vineyards are borne by the environment and local communities. Valérie Murat, an activist whose father died of exposure to toxic pesticides while working in vineyards, is being sued by the wine industry in Bordeaux, France for criticising the use of these substances.

“There is no such thing as a free lunch”: lobbyists wining and dining decision-makers might be the most widespread cliché about the lobbying profession, but there is more than a grain of truth to it. Isn't thanking who feeds you considered one of the most basic rules of social life?

To limit the influence this might confer to lobbyists, the European Parliament has enacted a rule forbidding gifts above €150 in value, and only those “in accordance with courtesy usage”. Has this threshold been reached with BASF’s “wine tasting kit”, and can six “small” (how small?) bottles of wine still be considered in line with normal courtesy? Surely BASF, whose 2019 EU lobbying budget was above €3 million, wouldn’t want to serve inferior bottles to MEPs, and 25€ per bottle is not that expensive when it comes to good wines.

Karen Melchior, a Danish RENEW MEP belonging to the European Parliament’s Advisory Committee on the Conduct of Members, told CEO that “we should try and apply in this exceptional situation the rules designed for the "real" life. If this had been an in-person event, the rules foresee that what is given MEPs in terms of drinks and food do not exceed what would normally be expected in such circumstances, and the event itself should be declared in the register of events organised by third parties. Online meetings are meetings. We should make sure that nobody uses the COVID situation to bend the rules".

This event raises many issues. We checked with a few MEPs: not all were invited. So, were only certain political groups invited, and if so which ones? Will this event only include friends of the agribusiness industry, to keep the echo chamber going and mobilise its MEP friends for the Farm to Fork battle? Have representatives of the Portuguese Presidency been invited too? Will MEP Irene Tolleret, a RENEW MEP and also a wine-maker from the Pic St Loup area in France, Herbert Dorfmann, the co-rapporteur of the INI report on Farm to Fork, or Norbert Lins, the Chair of the Agri Committee, be on the guest-list? Who else? Will all attending MEPs duly declare their participation to events organised by third parties, as per the applicable rules? Is this yet another example of how the pandemic is increasing existing inequalities between big business and NGOs when it comes to lobbying EU decision-makers? So many questions…

In the meantime, for those of our readers who would want to support a genuine environmental and social reform of the EU’s agriculture policies, signing the European Citizens Initiative “Save Bees and Farmers” can definitely help!

- RENEW MEP Irene Tolleret told us she had received the BASF invitation, but had declined to attend.

- Greens/EFA MEP Thomas Waitz told us he had not received the invitation.

- MEPs Dorfmann and Lins have not yet answered our questions on whether they would attend the wine-tasting.

- Politico Europe followed up on our story the next day and dug out very interesting new facts!

First of all, this wine tasting event was the second of its kind, the first having already occurred in December 2020.

Apparently, BASF would have invited only 20 MEPs, so, in all likelihood, a narrow circle of MEPs it sees as its closest allies. The wine bottles sent to MEPs were half bottles (375 ml), a standard  format containing 2-3 glasses, so the total amount of wine sent to MEPs by BASF amounts to about 15 glasses. This is way beyond what these MEPs would have drunk in the normal conditions of an in-person wine tasting, putting BASF's reported defense that "the wine tasting event is in accordance with the spirit and the letter of European Parliament’s lobbying rules" at odds with MEP Melchior's opinion of how "courtesy usage" in the rules should be interpreted.