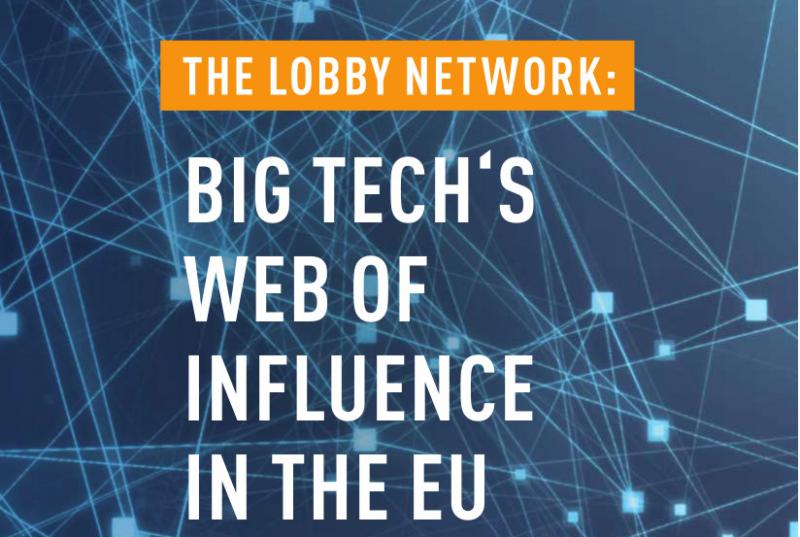 New research by Corporate Europe Observatory and LobbyControl shows that Big Tech has spent record sums of money to lobby EU institutions. The report shows that the digital industry now spends nearly €100 million on lobbying, a sum which dwarfs all other lobby spending by the private sector. This lobby surge comes as the EU discusses more stringent regulations on tech companies via the Digital Services Act (DSA) and the Digital Markets Act (DMA).

The new study ‘The Lobby network, Big Tech’s web of influence in the EU’  provides a unique and detailed analysis of the lobbying power of tech companies at EU level. It maps the biggest players, their networks and countries of origin, and uncovers their lobby budgets and access to EU decisions. The research also unveils how this lobbying power plays out in practice in the context of ongoing EU policy debates on the Digital Services legislative pack.

More than €97 million is spent by the digital industry on lobbying in Europe. A sectoral comparison of the top 10 companies across different industries shows that Big Tech now has more lobbying power than the pharmaceutical, car or financial industries.

Some of the main findings of the study include the fact that:

Max Bank, LobbyControl spokesperson, expert on lobbying and digital corporate power comments: "Currently, political processes are underway in the EU that aim to bring in stricter rules for digital platforms. With the Digital Markets Act (DMA) and the Digital Services Act (DSA), the EU Commission wants to limit the power of Google, Amazon and other big players. The digital industry is up in arms against this, and its concentrated lobbying power threatens to water these proposals down.

“The EU Institutions must respond by strengthening lobby and ethics regulation. EU member states, especially, must stop acting opaquely, and finally ensure that they provide democratic accountability regarding their processes and decisions. But policy-makers also need to be proactive and ensure they reach out to civil society, academia, impacted communities and small businesses.”

" Our findings show that lobbying, especially by the US tech giants, has one goal: to push back against any strict rules that could affect Big Tech’s business model and profit margins.”

“From a democratic perspective, these immense lobby budgets are deeply worrying and unhealthy. Efforts to regulate the digital economy have the potential to deliver a better internet - one that serves people, small businesses and communities. It is crucial that independent voices and citizens get involved in these policy discussions, to ensure that corporate lobbyists don’t get to shape the future of technology.”