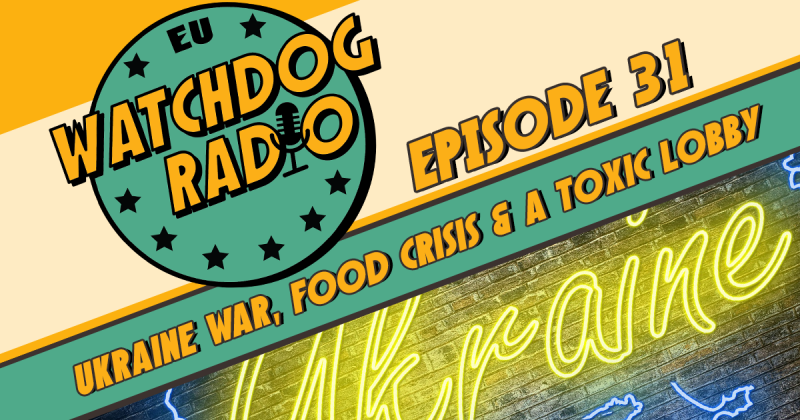 In the latest episode of EU Watchdog Radio, we discuss the linkages between the Ukraine war , the food crisis and subsequent ‘the policy fall-out’.  Agrobusiness lobbies and their political allies abuse the crisis to derail and delay the EU’s Farm to Fork Strategy.

A toxic lobby amplified by conservative politicians was very quick to start, calling for increased food production due to the Ukraine war. And thus they called for the need of more fertilisers and pesticides as they wrongfully think that this is the only way the produce enough healthy food, whereas in fact their lobby is just about defending a billion Euro agrochemical business model, at the expense of exosystems, farmers and the health of people alike.

In this episode, Nina Holland, researcher at Corporate Europe Observatory (CEO) explains the interlinkages between her new report 'A loud lobby for a silent spring: the pesticide industry's toxic lobbying tactics against Farm to Fork' and the politiucal opportunism abusing the horrible war in Ukraine.

Over a week ago, CEO exposed the immense and well-resourced lobby campaign against the EU Farm to Fork Strategy by pesticide lobby group CropLife Europe and their allies. On the same day, Agriculture commissioner Wojciechowski made statements implying that the Commission may be bowing to industry pressure and delay new pesticide rules. This anti-Farm to Fork lobby will certainly use this extra time to try and further derail the process.

Last week many Civil Society Organisations (CSOs) deeply regretted that the much needed revision of the Sustainable Use of Pesticides Directive (SUD) is being postponed and asked the European Commission to officially present a new publication date within the briefest of delays. The European Commission was expected to publish the revision on March 23, setting the path for the legal implementation of the Farm to Fork. EU law obliges Member States to reduce the use of pesticides since 2009, but more than a decade later, they still argue against it and attack any EU initiative that would finally get them to respect both the law and the science.

We also talk to Martin Dermine, expert of Pesticide Action Network Europe (PAN Europe) who explains why the pesticide law is not being respected by the member states; Derminne also explains that the 50 % pesticide reduction target that is now being postponed is in reality a non-issue because the farmers that already apply the EU-law from 2009 (SUD) and thus use Integrated Pest Management (IPM) already reduced their use of chemicals with 80 to 90%. A study shows for example that, in France, arable farmers could reduce their pesticide use by 30% without reducing their yield at all.