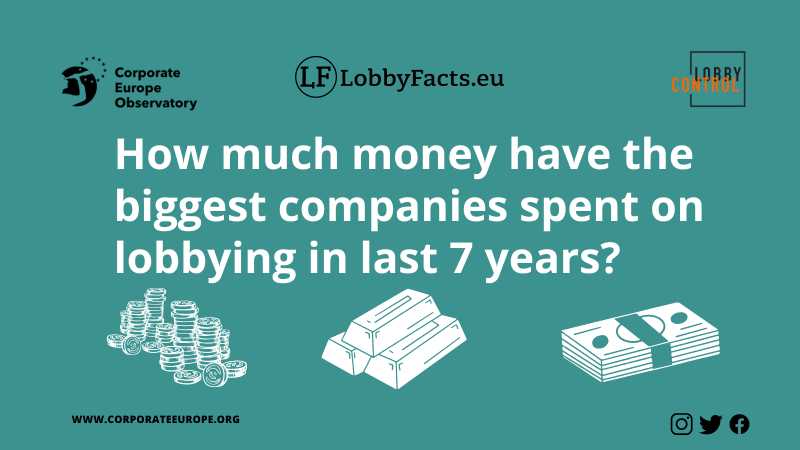 EU data website LobbyFacts.eu, coordinated by lobby watchdogs Corporate Europe Observatory and LobbyControl, shines a light on just how much money has been spent on lobbying in the past seven years, revealing that the companies with the highest declared lobby budgets have increased their spending by a third over this time.

In 2015 the 50 top-declaring companies spent roughly €90 million between them on lobbying. This figure increased to almost €120 million in 2022.

Today LobbyFacts shows that 71 per cent of those registrants declaring the highest annual lobby spending in the EU lobby register are likely to be wrong. Specifically, their declared lobby spending seems highly inflated when compared to other indicators of active lobbying.

We also reveal that at least 380 registrants are not declaring any lobby budget when, according to the register’s rules it is likely that they should be, adding to the dodgy data problem. LobbyFacts’ founders Corporate Europe Observatory and LobbyControl have now made an official complaint on these matters.

With this relaunch LobbyFacts is better than ever, with faster speeds and greater functionality. LobbyFacts is a groundbreaking tool for investigating lobbying at the EU level.

“Tracking the rise and fall of key lobbies, exploring revolving doors cases, building a profile of a company in the news, exposing dodgy data… LobbyFacts can help with all this and more.”

“LobbyFacts gives a realistic picture of the lobby scene in Brussels. Today it looks as if Big Tech has taken the mantle from Big Energy.

“But with the energy crisis and EU Green Deal on the political agenda, will this change? LobbyFacts will answer this question in the months to come!”

Related articles
A ranking of lobbying activities: Who spends most?
The revolving door – from public officials to Big Tech lobbyists
Complaint to EU lobby transparency register