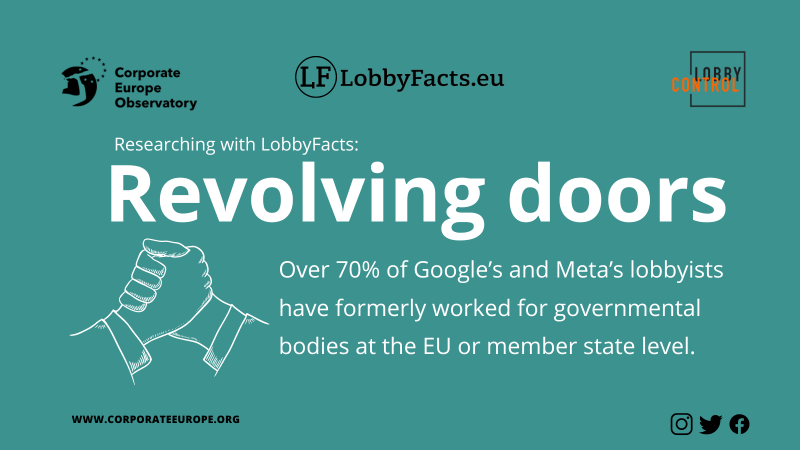 The revolving door – from public officials to Big Tech lobbyists

Around three quarters of all Google and Meta’s lobbyists (those that either hold or held European Parliament accreditation) have formerly worked for a governmental body at the EU or member state level. SidenoteWe counted those who worked in a governmental position for the EU or a member state at least for two months (including interns). The list of names was downloaded from LobbyFacts on 8th of September 2022. (Specifically, 79 per cent for Google, and 71 per cent for Meta, formerly known as Facebook.) In 13 cases this jump from public official to hired gun for Google or Meta occurred within two years. Some individuals even held the Big Tech company’s lobby passes within only a few months of leaving public office.

Revolving door hires happen throughout many levels of EU politics, from high levels in the Commission and MEPs, to policy advisers, and MEPs’ assistants, down to interns. Some have been in office for many years. Big Tech is usually interested in public officials from the policy field of IT, having worked on topics such as data protection, online platforms, intellectual property and cyber security. In some cases in the European Parliament, these persons have been part of committees such as the legal affairs (JURI) and the internal market and consumer protection committee (IMCO), before changing to Big Tech firms, having the task to lobby their former colleagues.

Especially when the fundamental job change happens quickly, the revolving door can raise serious questions of conflicts of interest. Formerly having the duty to act in the public interest and to protect citizen’s rights and data, a new job lobbying for Big Tech will most likely involve fighting for corporate interests against the public interest. The EU claims its ethics rules address this problem as well as that of revolving doors. But the way these rules are being implemented is widely criticised.

Authorisation period for ex-EU officials only a formality?

The rules do not appear to be taken seriously by the institutions and some former staff. One recent revolving door example is Aura Salla, who held various governmental positions – including high-level jobs at the EU Commission from 2014 to 2020 – before going through the revolving door. She started her new position with Meta within only three months, even though the officially required Commission's authorisation was still pending. Not surprisingly, as in over 99 per cent of these cases, the authorisation followed one month later. The Commission apparently did not fear a potential conflict of interest between Salla's former and new roles. Salla’s policy topics at EU-level included cyber-security, hybrid threads, disinformation, and election interference, as well as EU defence. Considering Meta’s history and interests, there is an inevitable conflict between protecting citizens' interests and those of the company – which makes the Commission’s judgement particularly incomprehensible.

Given the current laxness on these issues by EU institutions, LobbyFacts plays an important role in exposing the revolving door. Our work makes it possible to follow up on who held lobby passes for whom, from 2012 to the present day. Further, for each company high-ranked Commission meetings are counted as well as listed, networks displayed and a graph of the development of declared lobby spending is available.

The numbers of issued EP lobby passes tell their own stories

LobbyFacts' tracking of the number of EP passes helps reveal the history of lobbying battles. Meta started with two issued lobby passes to the EU Parliament in 2012, doubling this in 2016, and increasing it to ten in 2018 – when the Cambridge Analytica scandal (accused of misusing Facebook users' private data to influence elections) became public. A year later, the number of issued lobby passes was reduced to six, and has remained around that level since.

The data can be found here.

For more infomation, check out LobbyFacts.