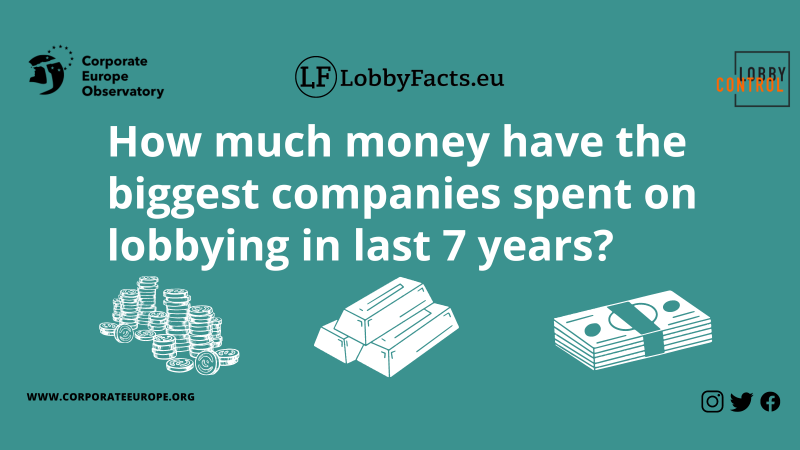 A ranking of lobbying activities: Who spends most?

Companies in the EU Transparency Register have increased their annual EU lobby budget considerably in the last years. In 2015, the 50 companies with the biggest declared lobby budget spent around €90 million collectively, while in 2022 it’s already €120 million, an increase of one third, according to new data released by LobbyFacts. Meanwhile their numbers of lobbyists have also increased from the equivalent of 300 full time lobbyist to 360 in 2022. All numbers in the register are self-declared by the lobbyists and are not independently verified. In addition, these figures are under-estimates. 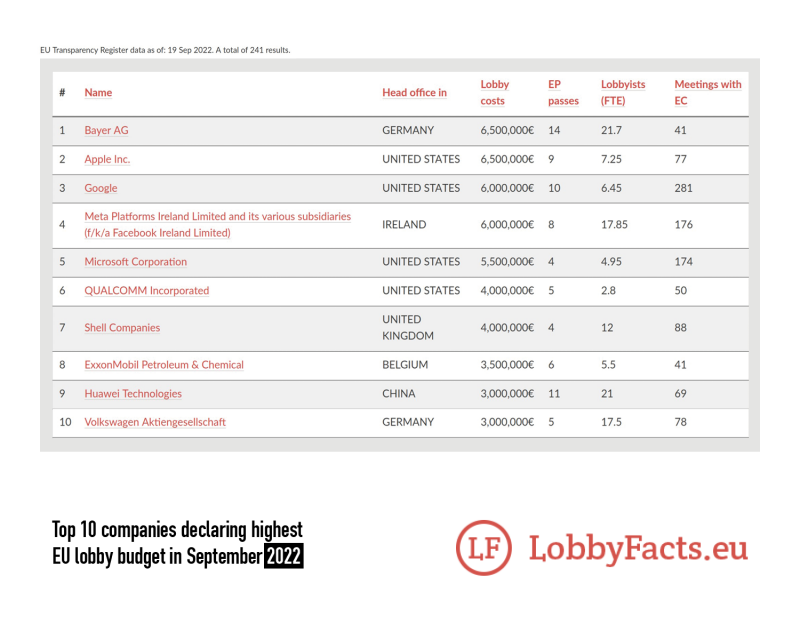 Big Tech very much dominates the top 10 highest spending companies in 2022: six of them come from tech firms, five from the US (Apple, Google, Meta, Microsoft, Qualcomm), and one from China (Huawei). They seem to have realised that they have something to lose in Europe with the new regulations (such as the General Data Protection Regulation, Digitals Markets and Digital Services Acts) since 2012. They have edged out energy companies in the top 10. In 2015, there were four energy companies in the top 10; in 2022 it’s only two, Shell and Exxon. They declare lobby budgets of €4 million (Shell) and €3.5 million (Exxon). 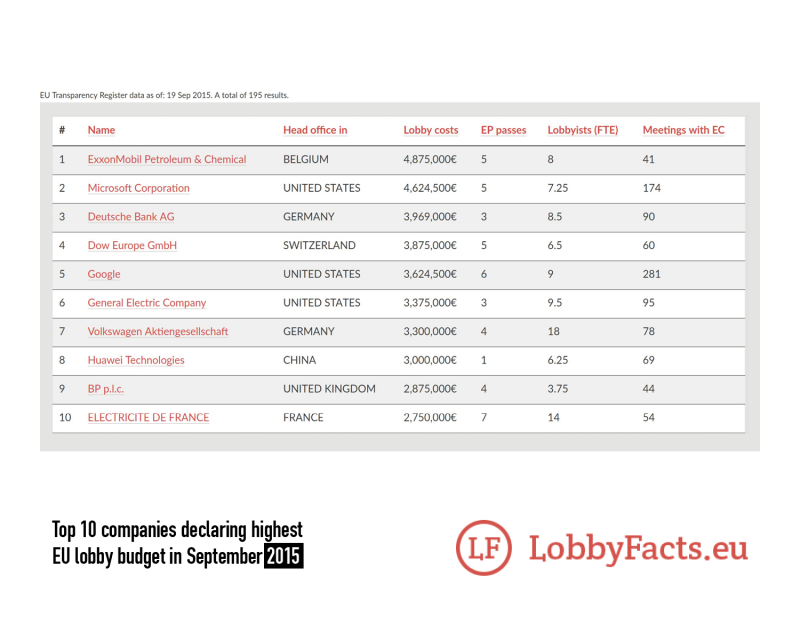 Is Big Tech the new Big Oil and Gas or will Big Energy retake the mantle after this year?

But energy companies are not lobbying less. Their declared lobby spend has stayed the same or only slightly fallen. But in comparison to the enormous sums spent by Big Tech, Big Energy looks less active. Further boosting their lobby power, energy companies also have a well-developed sectoral lobby with significant numbers of trade and business associations.

But with the current energy crisis because of the Russian war in the Ukraine, together with the Green Deal package, Fit for 55 etc, it is highly plausible that the top 50 biggest spending companies could look different next year, considering how much fossil fuels feature on the EU’s political agenda right now.

And what about civil society?

By comparison, NGOs have also increased their declared lobby spend considerably in Brussels since 2015. Nonetheless, this has not fundamentally changed the fact that lobbying by corporate interests dominates in Brussels. Declared lobby spending by the NGOs has more than doubled to almost €74 million, but it still 40 per cent less than the biggest corporate interests. Additionally, there are more than twice as many commercial lobby organisations in the register as non-commercial organisations. And as of 19 September 2022 the biggest 50 corporate interests appear to have significantly greater access to the Commission (3266 high level meetings) than NGOs (1867 high level meetings) since December 2014.**

All in all, we can say that the corporate sector – which consists not just of companies, but trade associations, lobby consultancies, law firms and others – have a far greater lobby footprint in Brussels than civil society.

The rankings created in this text can only be done using the official EU lobby register data held by LobbyFacts. The register itself collects the data but is not able to rank, sort and filter it. As there are lots of implausible entries in the register (due to the fact that the register is voluntary and its information is largely self-declared and unverified), we used the filter function in LobbyFacts to identify the most influential. In this case, our top 50 lists of companies was created by identifying those with the highest declared lobby spend, with an office in Brussels, who have held at least one meeting with the EU Commission, and who have held at leat one European Parliament access pass. The list of NGOs varies a bit as since September 2021, they are not asked for a lobby budget anymore. We took the data from 19 September 2021 and filtered for Brussels office and Commission meetings. Parliamentary passes weren’t widely held in that year because of Covid19.

The lobby budgets given mostly relate to the last completed financial year. The register calculates full time equivalents of the given working hours indicated by the lobbyists. The statistics used are from 19 September 2015 and 19 September 2022. 2015 was chosen because, from this year on, lobby meetings with Commissioners, their cabinets, and directors-general were conditional on entering the register. The list uses the category „companys and groups“. The following filters were set: Belgium Office: Yes. EP passes: Yes. Meetings with the Commission: Yes. Companies usually give a range – we have taken the lowest figure of this, so these figures are under-estimates. To specify who belongs to the Tech industry, check the methodology of our study: The lobby network: Big Tech's web of influence in the EU. The top 50 list of NGOs dates from 19 September 2021. Since 20 September 2021 self-declared 'non-commercial organisations' are no longer required to provide a lobby budget. Filters were set slightly differently because of Covid19: hardly any organisation held access passes to the EP at that time. Therefore: Belgium Office: Yes. EP passes: Either. Meetings with the Commission: Yes.

The data can be found here.

For more infomation, check out LobbyFacts.

**This article was updated on 21/9/2022 to correct the date upon which Commission high-level meeting data was first proactively published as December 2014.