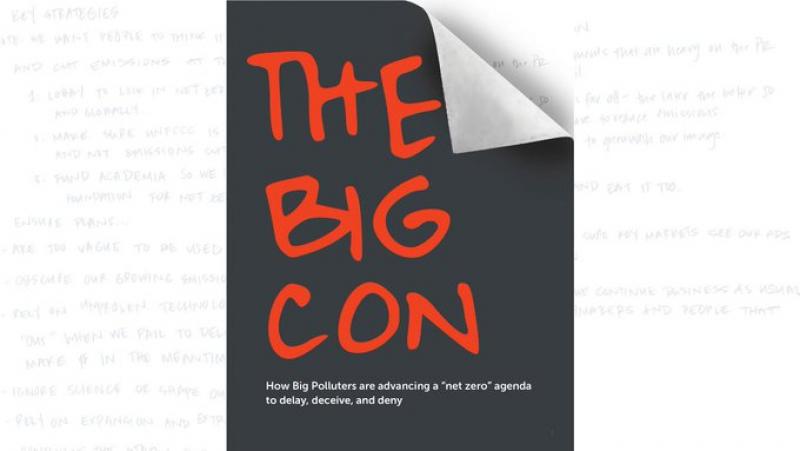 How Big Polluters are advancing a “net zero” climate agenda to delay, deceive, and deny

The new report from Corporate Accountability International, Global Forest Coalition and Friends of the Earth International, in collaboration with Corporate Europe Observatory and other groups, shows why Big Polluters’ “net zero” pledges should be anything but celebrated.

"Net zero" is stamped all over EU, international and national climate policies. The EU’s Green Deal and related policies have all adopted climate neutrality and ‘net-zero emissions’ by 2050. What this means in practice is that while some greenhouse gas emissions will be cut, fossil fuels will continue to be burnt and their emissions will be ‘balanced’ or 'offset' with an ‘equivalent’ amount of so-called ‘carbon removal’.

The fossil fuel industry and other big polluters are racing to be the loudest and proudest in pledging “net zero” emissions. Over recent years, more than 1,500 corporations, including some of the biggest climate criminals such as Shell, Total and Eni, have made “net zero” commitments. But is “net zero” something to be celebrated?

The Big Con: How Big Polluters are advancing a “net zero” climate agenda to delay, deceive, and deny presents evidence to show how “net zero” climate plans are simply the latest attempt by polluting industries, and the neoliberal governments doing their bidding, to escape responsibility to act to address climate change or to repair the damage they’ve imposed on ecosystems and frontline communities. Their proposed plans could even worsen the climate crisis.

Big Polluters use “net zero” climate plans to unite their toolkit of ‘false solutions’, a variety of risky technologies and deeply flawed schemes, from carbon markets or carbon capture and storage, to hydrogen, the latest silver bullet promoted by the fossil fuel industry. The bottom line is that each of them is a smokescreen that allows for continued emissions, and, if deployed at large scale, will have significant detrimental social and environmental consequences as well as exacerbating long-standing global injustices. Equally fundamentally, they distract from the rapid implementation of real solutions that are needed.

The report summarises the available details of 17 Big Polluters’ “net zero” climate commitments and business plans across a range of industries. For instance, Shell alone plans to purchase more offsets to compensate for its emissions every year than were available in the entire global voluntary carbon offset market capacity in 2019. And Eni, the Italian state-owned oil major, is planning on increasing its oil and gas production over the coming years, a feat that the corporation proposes to offset through avoided deforestation schemes.

The Big Con also explores some of the strategies that Big Polluters have employed to ensure “net zero” is embraced as the new form of “climate championship”, such as the ties with academic institutions. The report’s conclusion is clear: Big Polluters’ idea of “net zero” is part of their continued plan to protect deeply unjust global systems, distract from taking the real action needed, to evade responsibility for the climate crisis and to continue to pollute.