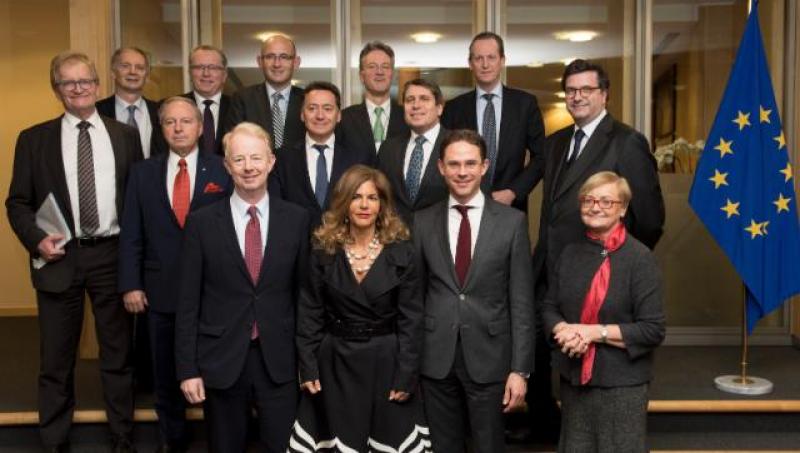 8 November 2016 saw the annual lobby fest between the Commission and BusinessEurope. Lasting for over seven hours, attracting four commissioners and the secretary-general, as well as 26 major corporate interests (who between them spend over €31,789,000 a year on EU lobbying), this is exclusive, privileged access at its most extreme.

Who were the lobbyists?

Of the corporate interests represented at this event (that is attractively called the "Advisory and Support Group, CEO Event"), there were a number of especially controversial companies in the room, hobnobbing with some of the EU’s most senior decision-makers over cocktails and dinner. These included Bayer, which is on the verge of merging with Monsanto; Google which, after BusinessEurope itself, has had more meetings with the Commission elite than anyone else and is the subject of three EU competition/ anti-trust cases; dirty energy firms Repsol, Lukoil, and General Electric; and ArcelorMittal, which not long ago recruited ex-commissioner Karel De Gucht to its board. We also couldn’t help noticing that of the 27 members of the BusinessEurope delegation only three (11 per cent) were women.

These corporations form part of BusinessEurope’s Advisory and Support Group, which includes 69 corporate members who are all offered “an influence on the European decision-making process” via “high-level contacts with the EU institutions (Commissioners, Cabinets, MEPs, Ministers)” in return for a - no-doubt generous - fee. Yes, that’s right. Effectively these businesses have paid BusinessEurope to participate in these exclusive lobby events held behind closed doors.

The total annual lobby spend of the 26 organisations expected in the room amounts to at least €31,789,000 (where bandwidth figures were provided, these have been rounded down so this is surely an under-estimate). Moreover, these organisations between them hold over 100 passes for the European Parliament, and have had a staggering 588 lobby meetings with the elite of the Commission since December 2014 (all data from LobbyFacts; see table at end of article for full detail). This begs the question: with these corporate interest representatives's access to EU decision makers already so good, why on earth should they be granted even more?

For the Commission, these events are seen as “an opportunity to update you on [our] work, and to understand the current concerns of business leaders to inform our policymaking”. For the businesses, coordinated by BusinessEurope (Brussels’ most influential corporate lobby group) it is an opportunity to plug their agenda. And this year’s meeting was no different. CEO has analysed the preparatory document for the meeting to find out what it was that the business interests in attendance planned to lobby on.

What issues did they lobby on?

In the session with Vice President Federica Mogherini, the EU’s high representative for foreign affairs and security, the key business messages concerned trade: the call was for a “Trade Policy that is not only ambitious but also effective”, perhaps reflecting growing business concern about the much-delayed TTIP negotiations. They also demanded, somewhat audaciously, a greater role for the EU’s diplomatic missions overseas to “reply to companies’ problems and promote Europe’s economic interest”, as well as urging more consideration of BusinessEurope interests at EU summits. CEO has previously documented how EU summits have been a very important focus of BusinessEurope lobbying to push for EU austerity policies.

For Digital Economy and Society Commissioner Günther Oettinger, who is currently fighting off allegations of racism, sexism and misogyny and accusations over trips in private jets with unregistered lobbyists, the discussion would have been on safer territory. According to the preparatory document, business interests were due to argue for completion of the Digital Single Market and are likely to have sneaked in a plea to “simplify and decrease regulation where it is not needed anymore”.

In fact, demands for deregulation ("Better Regulation", in EU parlance) are likely to have featured prominently in these discussions, including in the session with Commission secretary-general Alexander Italianer. This was due to be a 50-minute session, which is a striking length in comparison to the he 10-minute meeting with Italianer granted to ALTER-EU (representing 200 member groups), Transparency International, WeMove.EU and representatives from the EU staff when they handed in and explained their petitions on the Barrosogate scandal, signed by a total of over 213,000 people.

In BusinessEurope’s better regulation session, among demands for more impact assessments (tools which NGOs argue often deliver a pro-business outcome) and calls for more consultations with affected stakeholders (ie. business), featured the demand that “changes introduced during the legislative process should [...] not add any further requirements on businesses and citizens. The Commission should be prepared to withdraw proposals if it is likely that the end result will be more burdens, and it is important that constant dialogue with stakeholders takes place throughout the legislative process.” This means that BusinessEurope wants the Commission to scrap draft new laws if the European Parliament votes to include social or environmental safeguards, something which the business lobby has also been demanding in other fora!

Maros Šefčovič is Commission Vice-President for the Energy Union and was due to attend the BusinessEurope event to discuss climate policies. As the UN climate talks continue in Marrakesh for COP22, industry continues to push for a seat at the table at climate negotiations, claiming to be a legitimate partner. Yet, at the same time their ‘solutions’ include further expansion of fossil fuel extraction via not-so-clean natural gas, as well as carbon markets (emissions trading), a tool that continues to fail its purpose. Their support for a market-based approach to the European electricity market translates into industry choosing how things should be run. And business lobbyists were also likely use this session to emphasise their strong opposition to subsidies for renewable energy, while staying quiet on the mass of current and future fossil fuel subsidies. Industry claims that green subsidies increase costs for consumers, but if we want locally-owned and controlled cleaner energy sources that break the grip of Big Energy, there will be no way around subsidies.

Finally, the evening dinner with Jyrki Katainen, Vice-President for investment, likely focused on Brexit and the need to maintain the “integrity of the single market” with simpler EU and national regulations, sound public finances (read austerity?), and “reforms which reduce the cost of doing business in Europe”, among other measures.

Why does any of this matter? What is the significance of this particular, extended lobby meeting? Juncker has told commissioners that they “should seek to ensure an appropriate balance and representativeness in the stakeholders they meet." It seems clear, however, that there is no practical monitoring, let alone enforcement, of this guideline. And of the four commissioners and the secretary-general due to attend, only one (Šefčovič) has so far recorded the meeting on the published list of lobby meetings - still, Šefčovič has misleadingly labelled it as a meeting with BusinessEurope, rather than listing all businesses that were in attendance and benefitted from being there.

Moreover, two organisations that were due to attend - Elsevier and Republikova Unia Zamestnavatelov (RUZ) - are not on the lobby register; pharma company Sandoz does not appear on the register either (although parent company Novartis is, so we use its lobby figures above). Meanwhile, the Malta Chamber of Commerce, Enterprise and Industry also does not appear on the register, although in terms of EU lobbying it appears to be represented by the Malta Business Foundation, which is registered. Commissioners are supposedly prohibited from holding meetings with unregistered lobbyists, but this meeting seems to indicate that behind-the-scenes such meetings do happen.

It appears that BusinessEurope and its corporate members have strong expectations that meeting behind closed doors on an annual basis, they will be able to catch up with multiple commissioners - notwithstanding the more than 130 other meetings BusinessEurope has, for instance, held with the elite of the Commission since December 2014. You can find out more about last year’s meeting here.

Meetings such as the "Advisory and Support Group, CEO Event" represent privileged access to the Commission’s decision-makers, and as such, should not be allowed to go ahead. Big Business cannot expect to have regular, privileged lobby access to the Commission, particularly not at such annual lobby extravanganzas on the institution's own premises. This is nothing more than a blunt lobbying and fundraising effort, through which the Commission must not be co-opted.

LobbyFacts.eu data on organisations that were due to attend BusinessEurope's Commission event in Commission (data collected 15 November)