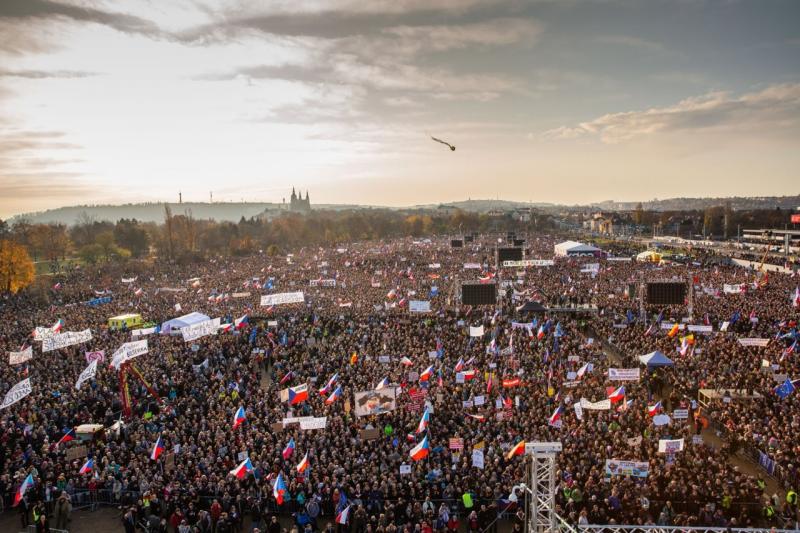 Saving Czech – and European – democracy: the EU must put the brakes on ‘mafia-style’ oligarchy

Journalist and Corporate Europe Observatory board member Jakub Patočka comments on the conflicts of interest scandals of the oligarch-turned-Czech Prime Minister – and explains how an injection of democracy is also needed at the EU level.

Later this week the European Parliament will vote on a resolution that strongly condemns the Czech Prime Minister Andrej Babiš’ conflicts of interest. He is accused of exerting control over Agrofert Company, which receives EU subsidies, while at the same time being actively involved in the implementation of the EU Budget for the Czech Republic. The resolution “deplores” this situation and  calls “into question the impartial and objective exercise of his functions in contravention of Article 61(1) of the Financial Regulation”.

The Parliamentary resolution also urges the European Commission to take firm action to end Babiš’ malpractices. In meticulous detail it exposes the ways that the Prime Minister has obscured the fact he remains the sole beneficiary of his agrochemical corporation, Agrofert; how he has essentially captured the Czech state in order to serve his corporate interests; and how he has been fraudulently accessing subsidies both on the European and the national level.

The resolution lays out dozens of recommendations for concrete actions that the European Commission and Council must take to halt the abuse of EU subsidies in Czech Republic and elsewhere. This includes new control mechanisms for conflicts of interest, a policy of zero tolerance, ending funding for Agrofert, preventing oligarch politicians from participation in decisions that concern their interests, and last but not least, it insists that the Commission must publish its audit report on Babiš’ conflicts of interest without further delay. These echo the demands of Czech civil society, which has been protesting the takeover of the Czech state by Babiš in unprecedented numbers in last two years – culminating in 300,000 people joining the November 2019 demonstration in Prague, the largest since 1989.

The resolution gives damning evidence of how the Czech state is failing its own citizens and has allowed many of its institutions to become vehicles serving the interest of the Czech oligarch-turned-Prime-Minister; as well as how Babiš uses his executive power to coerce public servants into pretending that his personal interests are in fact equivalent to the interests of the state.

The resolution states that the European Parliament: "Strongly disapproves of the creation and establishment of oligarch structures drawing on EU agricultural and cohesion funds whereby a small minority of beneficiaries receive the vast majority of EU funds” and “calls on the Commission together with the Member States to develop effective legal instruments to respect the rule of law and avoid fostering such structures".

The resolution states that the European Parliament: "Strongly disapproves of the creation and establishment of oligarch structures drawing on EU agricultural and cohesion funds whereby a small minority of beneficiaries receive the vast majority of EU funds”.

The resolution has been sponsored by politicians of all major EP groups, including MEP Ramona Strugariu of Babiš’ own Renew group. As a matter of fact, the Renew group that harbors several exceptionally vocal critics of Viktor Orbán’s FIDESZ membership in EPP should without any further excuses proceed to expel Andrej Babiš party from their ranks. How can the behaviour outlined in the parliamentary motion be defended by any 'liberal' worthy of the name?

Should the resolution be adopted – and swiftly implemented – it would show the EU is capable of living up to its own standards and can ensure member states maintain the democratic norms they agreed to abide by when joining the union. But while we should welcome this impressive initiative by the European Parliament, it is important to understand the context and circumstances that have led to this terrible situation in the first place.

Since the enlargement of the European Union in 2004 (and in many cases even before), EU subsidies have too often been used not to foster the stated aim of economic and social convergence of the post-communist countries with the western democracies, but rather to build local, regional and national mafia-like structures. These structures have invented sophisticated methods in order to meet the regulatory demands of EU and at the same time build their clientelist arrangements at home. Back in the 1990s the late Czech President Václav Havel coined the term “mafia-capitalism” to describe this kind of business structure which makes profits by siphoning off public budgets.

The EU institutions failed to ensure that the quality of democracy, a flourishing civil society, and a free press would be guaranteed as a part of the enlargement process. As a result many of the new member states have seen the ruthless and well-resourced becoming ever richer and more powerful. But the EU have also failed the public in their own countries by allowing the taxpayers’ money being used in such deplorable way.

The reason for this is perhaps twofold. First, the EU institutions have been lured into believing that as long as formal democratic procedures are upheld, the political representatives of the post-communist countries still reflect the true democratic will and interests of their societies; at least to a similar extent as in the West. But in many cases this is simply not true.

Almost no attention was given to the role of civil society and free media, and virtually no independent checks were put in place to monitor the quality of democracy and to take care of its nourishing and development. In this sense the sacrosanct principle of subsidiarity has failed the EU, because in fact it has in many cases supported structures by their nature completely hostile to the values on which the European Union is supposedly based.

It is not to say that EU funds have not generated an enormous volume of public good in the new member states. But the collateral costs of money diverged to oligarchs and their ilk are unacceptably high. The default response – to make bureaucratic safeguards to access EU money ever more complicated – has not improved the situation much because it discourages many of the smaller, genuinely eligible potential recipients of the subsidies, while the big murky players usually find their way around the rules.

We should be aware, then, that oligarch Andrej Babiš is targeted only because he has made the mistake of becoming too visible by entering politics directly. If he had stayed behind the scenes, bribing his way through corrupt Czech and Slovak politics as he did for 20 years previously, nobody in European Institutions would be concerned about him.

This leads us to the second reason why the EU was ill-prepared to manage the enlargement properly. Western European countries themselves – as well as the EU in general – have a striking democratic deficit of their own, given their own decision-making processes are too prone to be influenced by undue financial and corporate interests.

In reality the case of Andrej Babiš – or for that matter, Hungary’s Victor Orbán and his network of cronies – is different only in scale, but not in principle, to the situation in EU, where for example big pharma corporations can buy influence (via lobby spending, revolving door hirings, etc) to set up the priorities of EU medical research, the car industry can buy influence over the EU transport policy priorities, or the large fossil fuel and nuclear industries trying to impose their outdated concepts on EU energy policy… such a list would be very long.

The eye-watering difference between the way the EU Institutions treated Greece for diverging from the neoliberal economic orthodoxy during the early years of the Syriza Government, and the lenient way they are treating the failing Central European democracies in the Visegrad countries, bears painful witness to the EU’s real priorities. Time and time again, we see economic and corporate interests favoured over the quality of democracy and the rule of law.

So while it is absolutely commendable that the EU is stepping up its pressure on Andrej Babiš, celebrations will be premature unless the Parliamentary resolution is not promptly translated into action by the European Commission and Council. It’s high time for the Commission to publish its audit report on Babiš’ conflicts of interest, followed by terminating funding flows to his business empire and keeping him out of EU decision-making related to his business interests. And these measures must be followed by a whole-hearted effort to significantly strengthen the quality of democracy, in the Czech Republic, but also beyond that, in all parts of Europe.

This would require substantially increasing direct support to civil society structures and to the struggling free press in many European countries, while making this support more accessible, flexible, and less bureaucratic. Because this is the only proven way to put effective checks on the unacceptable influence of big money – be it corporate, oligarch, Russians or Chinese – on the decision-making processes in European democracies that are getting more and more fragile by the day.. With the outstanding budgets being designed for the post-covid-19 economic revival, the debate over those essential pro-democratic measures seem to be as urgent as ever. Because it is democracy in Europe that needs a revival the most.