One and a half week after this blog broke the news of the suspension of Brussels lobby firm GPlus from the European Commission’s lobbying register, the company is back on the register after having disclosed four previously unnamed clients.

Earlier this week, the ALTER-EU coalition published the report “Commission lobby register fails transparency test”.This first in-depth assessment of the Commission’s register concludes that the voluntary approach is failing: the compliance rate is alarmingly low and the overall quality of information disclosed is very poor.

BP – Extracting Influence at the Heart of the EU

Oil industry lobbying at the heart of the EU has played a key role in influencing Europe's energy policy. The report BP - Extracting Influence at the Heart of the EU reveals BP’s close relationship with EU decision makers and highlights how the company has convinced Commissioners and others that BP’s interests are in the EU’s interest.

The Story of a Dutch Letterbox

"Bilateral Investment Treaties represent the codification of a new hierarchy which places private commercial needs above the protection of the public interest, blurring – seriously, and perhaps fatally – the boundaries between public and private interests". Susan Leubuscher [1]

In October 2008 EU member states finally approved a deal which will bring aviation into the emissions trading scheme. The agreement follows three years of deliberations, yet despite the apparent commitment by the EU to cut greenhouse gas emissions, it will make little difference to the level of emissions from the aviation sector. How did this happen?

In March 2009 the Turkish government will host the fifth World Water Forum against a backdrop of what is probably the most sweeping water privatisation programme in the world. As well as privatizing water services, the government plans to sell of rivers and lakes. Turkish social movements, who hosted their own conference in Istanbul last month, suspect the Government is using the World Water Forum to push through this highly controversial agenda. 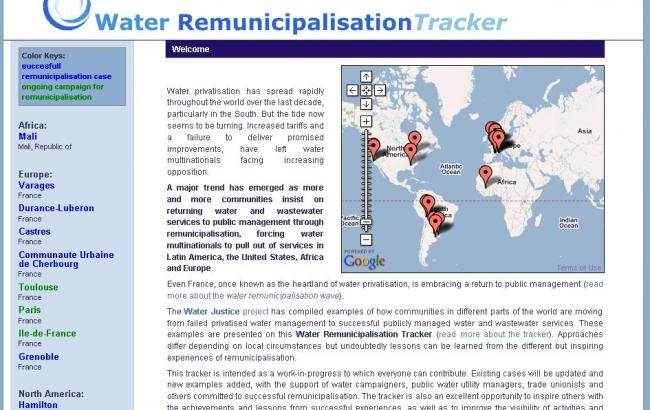 A new website - www.remunicipalisation.org - went live June 12 to highlight the growing trend to return failing privately managed water services to public management. Just this month, the Mayor of Paris announced that the city would be returning services to public management from 2009. France - arguably the heartland of privatised water services - is at the forefront of the remunicipalisation trend that is also manifesting itself in parts of South America, North America and Africa.