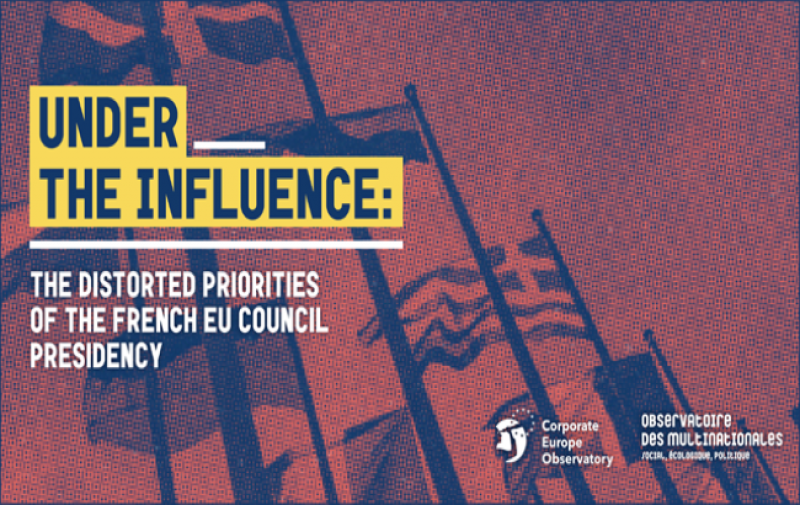 Under the influence (II)

The distorted priorities of the French EU Council Presidency

In January, France will take on the rotating Presidency of the Council of the EU for six months. This Presidency will have a particular resonance both in France itself, coinciding as it does with Emmanuel Macron’s re-election campaign, and at the European level, with many critical pieces of legislation and policy on the line. It is therefore worrying that this Presidency has been prepared in close collaboration with the French corporate sector, and is setting a policy agenda that strongly reflects business demands.

As our new report (published together with Observatoire des multinationales) demonstrates, the French Government looks set to promote its own vision for supporting powerful ‘champions’ from among EU and especially French multinationals, no matter that these will not be very different from the US and Chinese players that Macron criticises. Furthermore, a sceptical eye will need to be cast on the claims of the Presidency as, in too many policy areas, grandiose rhetoric is unlikely to match the achievements in reality. Nowhere is this more stark than in the area of European democracy where Macron’s stated desire to “stop building Europe in isolation from citizens” is contradicted by his government’s approach behind the closed doors of the Council. Finally, we see that the French Government has missed the opportunity to break clean from the worst practices of previous presidencies, and has accepted corporate sponsorship. All in all, unless urgent change occurs, the French Presidency will put public interest decision-making at risk.

Key findings of Under the influence:

1. France has chosen not to do away with the controversial practice of bringing in corporate sponsors for its Presidency of the EU Council. Carmakers Renault and Stellantis – both with a huge stake in EU policy developments during the Presidency – will be allowed to showcase their logos and boost their profile to decision-makers.

2. The little information we have about the meetings between officials and stakeholders during the preparation of the Presidency suggests a very strong bias in favour of industry lobby groups. Of the 40 lobbying meetings disclosed by the French representative in Brussels and his deputy, 31 were with corporations or industry groups, but only 2 with civil society (the other 7 were with think tanks or public institutions). Evidence suggests meetings with industry groups began well before the subject of the French Presidency of the EU was even on the agenda of the French Parliament.

3. French institutions – both the French Representation in Brussels and ministries in Paris – offer numerous examples of problematic 'revolving doors'. For instance, an adviser on energy at the French Representation in Brussels has previously worked for TotalEnergies, and former energy advisers have moved on to become lobbyists for Engie and Arianespace. Similarly, former advisers on financial issues now work for Société générale, Amundi, and even for France’s main banking lobby group Fédération bancaire française. Revolving doors create a risk of privileged access for industry lobbyists, as well as conflation between the public interest and the private interests of French corporations – but French representatives deny this is even an issue.

4. The French Presidency of the EU Council will be entangled with the campaign for national elections in France. In spite of official assurances that there would be no confusion, there are signs that the agenda of the French Presidency and the agenda which Emmanuel Macron is preparing to push for his re-election bid are closely interrelated – in particular the push for nuclear energy and industrial champions. Some ‘quick wins’ – such as the implementation of a minimum corporate tax rate – might be spun out of proportion for electoral purposes. This will inevitably hurt the quality of democratic debate, and the policy outcomes secured, during the French Presidency.

5. In the name of climate action, the French Government is pushing for more public support and funding for controversial industries, including a renewed push for the nuclear sector. For the sake of nuclear energy, the French Government appears willing to undermine the integrity of the European Green Deal and other EU policies on the climate crisis, for instance with the demand that gas is seen as ‘green’ in the Green Taxonomy which will direct financial flows accordingly, and generally through the prioritisation of industry-pushed 'techno-fixes' instead of structural changes to make our lives more sustainable.

6. While the French Government has been vocal on the need to regulate US-based Big Tech, there is concern it seeks to replace these with home-grown digital champions. Despite talk of 'digital sovereignty', a flurry of lobbying activities in the run-up to the Presidency appears to be pushing a European 'digitalisation' agenda that appears no more benign than that of Silicon Valley's in terms of privacy, basic freedoms, privatisation, and workers’ rights.

7. The French Government is advocating a ‘Europe of Health’, but it doesn’t seem to have drawn the lessons of the COVID pandemic in terms of addressing the excessive bargaining power of pharmaceutical companies or properly investing in public health systems. On the contrary, its vision seems to entail even more public funding to private corporations and for new markets in the care and health sector, particularly ‘e-health’, with several events on the topic planned during the French Presidency.

8. The French Government is bringing its own traditions of close public-private collaboration in so-called 'strategic' industrial sectors to the EU level. There is growing momentum at the European level for ever closer public-private collaboration and ever more funding for corporate players in so-called 'strategic industries' (including hydrogen and cloud technology), often with a dubious technological agenda and without proper democratic debate.

9. French EU Commissioner Thierry Breton – chosen by Emmanuel Macron and the first corporate Chief Executive to be directly selected as Commissioner – is closely aligned with the French Government's agenda. An explicit supporter of the nuclear industry, he has had numerous meetings with French corporate interests since the beginning of his mandate, and been very active in promoting public-private cooperation and the development of corporate champions in strategic sectors.

10. In stark contrast with Macron's discourse about the need for more European democracy, the French Government has systematically opposed efforts to improve transparency and accountability at the level of the Council of the EU. The French Presidency appears as a missed opportunity to change gears and push an ambitious democratic agenda. On the contrary, its push for supporting 'European corporate champions' risks creating new forms of corporate capture of EU institutions and policy-making.

There are some basic steps the French Presidency has failed to take (so far) to avoid excessive corporate influence. There is still time but the clock is ticking and the eyes of Europe’s citizens are watching.