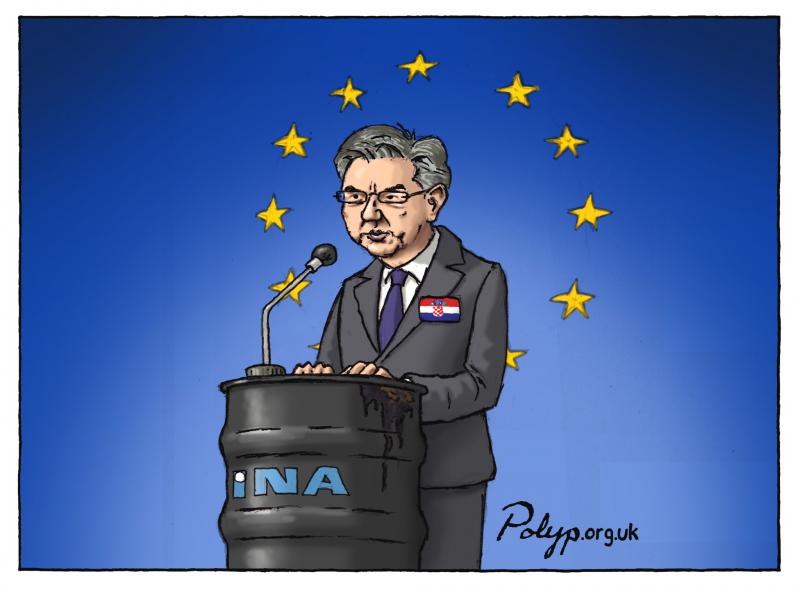 Never heard of them. Who are they?

INA is a Croatian oil company which plays a key role in oil and gas exploration and production, processing, and distribution. It has subsidiaries around the region in Slovenia, Bosnia and Herzegovina, Serbia, and Montenegro. Essentially its business model is based on dirty energy.

Trying to redeem its image, the company half-heartedly promotes its “sustainable development” strategy.

But this is just greenwash. INA is making ongoing efforts to further develop its production of oil and gas. This is despite the fact that, to avoid dangerous global warming, the climate science shows we have little time left to end the fossil fuel era, and must meet strict EU and national targets to reduce green-house gas emissions. INA's website doesn’t mention any plan to fundamentally change its polluting activities towards more sustainable sources of energy.

OK, but INA sounds quite small.

But its parent company is big. INA is partly owned by the Croatian Government (45 per cent), but MOL Group, the big Hungarian fossil fuel company, has owned 49 per cent of INA since 2009. MOL is a much bigger company with operations in over 30 countries and 26,000 employees worldwide. The former Prime Minister of Croatia Ivo Sanader is currently serving a jail sentence for corruption, linked to the privatisation of INA and its sale to MOL.

MOL is a significant EU lobbyist, spending up to €699,999 to lobby the EU in 2017; it is also a member of several lobby groups that give it extra firepower, including the International Association of Oil & Gas Producers (IOGP), FuelsEurope, the European Chemical Industry Council (CEFIC), and the European Round Table for Industry. All these groups have lobbied successfully to weaken, delay, and block effective climate policy. MOL has also enthusiastically recruited a Commission official through the revolving door.

So even though INA isn't the biggest player in town and it is not registered in the (voluntary) EU lobby register, its co-owner MOL is a significant lobbyist in Brussels.

And how does the Croatian Government fit in?

INA is 45 per cent owned by the Croatian state.

And now INA has signed a sponsorship contract with the Croatian Government for its six month Council presidency. The Government announced on its website that INA will be its “official gasoline supplier”, but don’t ask what that means, what exactly it will provide, or what it will get in return, as the Croatian Government has so far refused to provide any further details.

Sponsoring the Council of the EU? Sounds a bit dodgy!

It is dodgy! While almost all countries holding the rotating Presidency of the EU have accepted corporate sponsorship from the likes of car companies, software companies, and even Coca Cola, others are increasingly speaking out to condemn this ridiculous practice. Recently the European Ombudsman said such practices create “reputational risks” for the EU while MEPs have said they risk creating a “loss of trust”.

Croatian and EU NGOs have also demanded an end to this practice, alongside various other measures to tackle privileged access and improve transparency at the Council. We are yet to receive a response, so today Croatian NGO Gong is holding a press conference in Zagreb to further voice its concerns.

Afterall, the Council of the EU is one of the most important EU institutions, and plastering corporate logos on the Presidency website, and maybe even at events with member state ministers and officials too, raises serious questions, considering that these businesses – like INA and its owner MOL – are likely to have a clear self-interest in EU decision-making.

Why the Croatian Government love affair with a fossil fuel company?

It’s no big surprise that Croatia has opted for fossil fuel sponsorship. At the national level, Croatia’s vision of economic development has relied on fossil fuel extraction and production for years; this is despite strong popular opposition, and great potential for other sources of energy.

The Croatian Government appetite for dirty energy continues. It submitted nine gas-related projects to the list of those eligible to receive EU funding, the Projects of Common Interest. This list, approved by the European Parliament yesterday, 12 February, determines which projects are to be fast-tracked and could receive EU and / or European Investment Bank funding.

Part of this PCI list, and key to the government's fossil fuel developments, is major new gas infrastructure on and offshore from the island of Krk. This scandal-ridden project is facing tough opposition from local residents and public authorities, who point to the lack of consultation and its harmful impacts on tourism and nature.*

Meanwhile, last year INA was awarded several new licenses for the exploration and production of hydrocarbons (mainly gas). More generally, the Croatian Government has been issuing an increasing number of licenses. As oil and gas companies' reputations become more and more tarnished, they are keen to find new allies and new markets. Happily for them, the Government of Croatia is encouraging more and more dirty investments, despite the current discussions to propose stricter 2050 EU targets (albeit weak ones) to reduce carbon dioxide emissions by 2050.

It sounds like the Croatian Government did not get the memo about the climate crisis.

Indeed. Despite decreasing gas demand, high environmental risks, and increasing public concern about the growing climate crisis, the Croatian Government is not on board with the radical action needed to tackle the climate crisis.

Worryingly, as the holder of the EU Presidency, Croatia is now responsible for driving forward the Council's work on EU legislation, and in particular promoting EU flagship policies such as the European Green Deal. So when the Croatian EU Presidency is sponsored by the same fossil fuel company that has been lobbying for more oil and gas projects, it raises serious doubts about the Council Presidency’s commitment to climate action, especially when you consider the event the Government will be participating in on 17 February 2020.

On 17 February 2020 the lobby group International Association of Oil & Gas Producers (IOGP) and the European Energy Forum (EEF is a platform for MEPs and representatives of Big Energy to mingle) are organising an event in the Parliament premises with the Croatian Ministry of Environmental Protection and Energy, an official from the Commission, and Jerzy Buzek, a conservative MEP who is President of the EEF and known for being very cosy with Big Energy. Another speaker will be the IOGP Director of EU Affairs.

With no sense of irony, the event is about the role of oil and gas and the European Green Deal! Topics such as carbon capture and storage (CCS), hydrogen, and oil and gas infrastructure protection are all on the agenda. But CCS and hydrogen produced from fossil fuels are only likely to divert attention away from genuine solutions to the climate crisis, while providing lucrative business prospects for the fossil fuel industry.

According to a newly-published list of lobby meetings, the Croatian Deputy Permanent Representative also met with IOGP and FuelsEurope in November 2019.

If decision-makers not only fail to kick polluters out of the room but eagerly invite them in, then they need to be pressured to stop doing so. The Fossil Free Politics campaign asks EU representatives, including the Croatian EU Presidency, to boycott the 17 February event and be far more discerning about who it lends its endorsements too.

Would you invite the fox to discuss hen-house safety? Likewise we need to keep the fossil fuel industry – heavily responsible for the current climate emergency and for decades of denial and delay – away from our democratic institutions and political decision-making. It’s time for Fossil free politics!

Fossil fuels have their place in the energy mix.

*This article was updated on 14 February to include additional information about the Krk project.